The Araceae are a family of pantropical monocotyledons with some members in the temperate zones. Herbaceous plants, at times with tubers and rhizomes, climbers with adventitious roots, epiphytic and even aquatic floating plants, such as the small species belonging to the genus Lemna or the showy Pistia stratiotes that nowadays has invaded the tropics.

In the rainforests the old stems get hard and so, evolutionally, bit by bit, has come to life also in this large family some rare woody climber. Many species have developped poisons, like the Dieffenbachia, known indoor plants with irritating latex in the stem and in the leaves that once were put into the mouth of the screaming slaves to cripple, for some days, their vocal cords.

When a seed of Philodendron falls on a tree of the forest, the seedling fixes, as it can, on the support and immediately develops an aerial root that reaches the soil to take root in the underwood humus. And if under there is water? This is not a problem. Because, like my Monstera that acts as bioactive tapestry over the home aquarium full of fishes, the aerial root will develop in a few days a tangle of hydroponic roots that will nourish the plant. 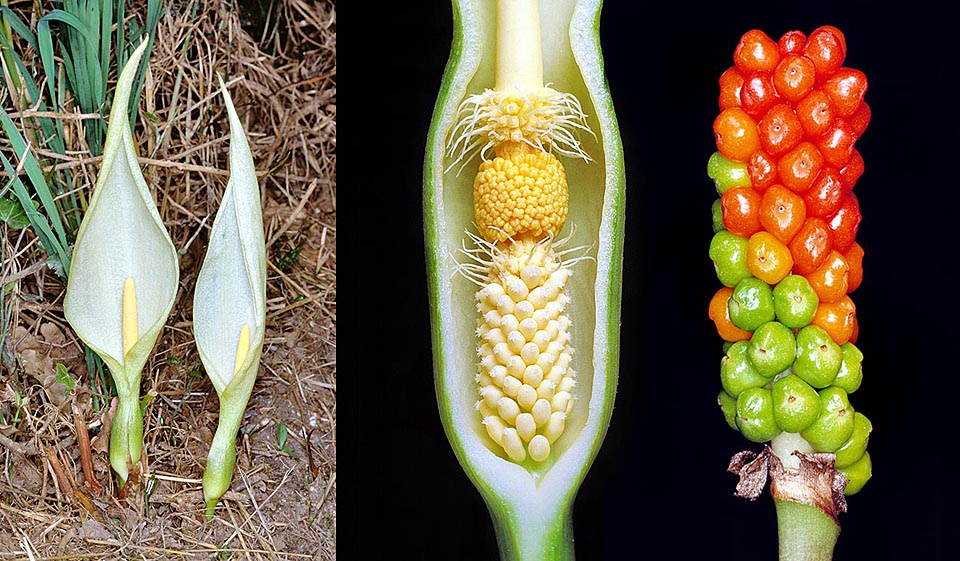 In the great laboratory of the rainforests the limit between the epiphytic species and the terrestrial ones is really tenuous and the roots of some Aracee develop special tissues for catching the humidity of the air, a little like what occurs in the astonishing family of the orchids with the velamen.

The structure of the inflorescence is unmistakable: a showy spathe that attracts the pronobuses and protects a sort of a column, called spadix, covered by countless tiny flowers without stem.

Starting from the bottom, the spadix shows a zone with the female flowers, followed by a ring of sterile flowers, then a zone with the male flowers and again a ring of sterile ones. These last, transformed in well arranged hairs, allow the Arum italicum, the Dracunculus vulgaris and allied species, to trap the flies till when the pollination is completed, attracting them, in addition to the luminous spathe, with a temperature increase of the inflorescence and an irresistible stink of rotten meat that is so much appreciated by the guests.

The flowers are really tiny, at times smaller than 1 mm, like in the well known Wolffia arrhiza that holds the record of the smallest corolla in the flowers world. They can be hermaphroditic or unisexual, carried by the same plant, as we have seen for the Arum, or by plants of different sex, called dioicus, as is the case of the genus Arisema.

The formua of the flower provides a perianth (absent in the Lemna ) formed by 4-6 elements, one androecium with 1-6 stamina, and one gynaeceum formed by three connate carpels (two at times, one only in the Lemna) with superior ovary. The fruits are usually berries coloured for attracting mainly the birds and some mammals that will take care of the dispersion of the seeds.

In the tropics the tubers of some Araceae end up in the kitchen, but the human interest for these plants is mainly horticultural due to the splendour of the inflorescences and the scultural beauty of the leaves. The species growing in the underwood, are usually good apartment plants because they well adapt to the scarce luminosity of the home premises.

Certainly it would be better to have a high humidity, but apart some difficult species, such as the [Caladium bicolor, they are robust plants doing everything possible to live: we think of the genera Philodendron, Monstera, Epipremnum, Aglaonema, Alocasia, and Dieffenbachia, beautiful because of the leaves, or of the showy inflorescences of the Anthurium and Spathiphyllum, used even often as cut flowers in the floral compositions.

The Alocasia macrorrhizos grows well, with its majestic leaves also in the warm temperate gardens and the Zantedeschia aethiopica besides making happy the florists perfectly adapts to the Mediterranean climate. 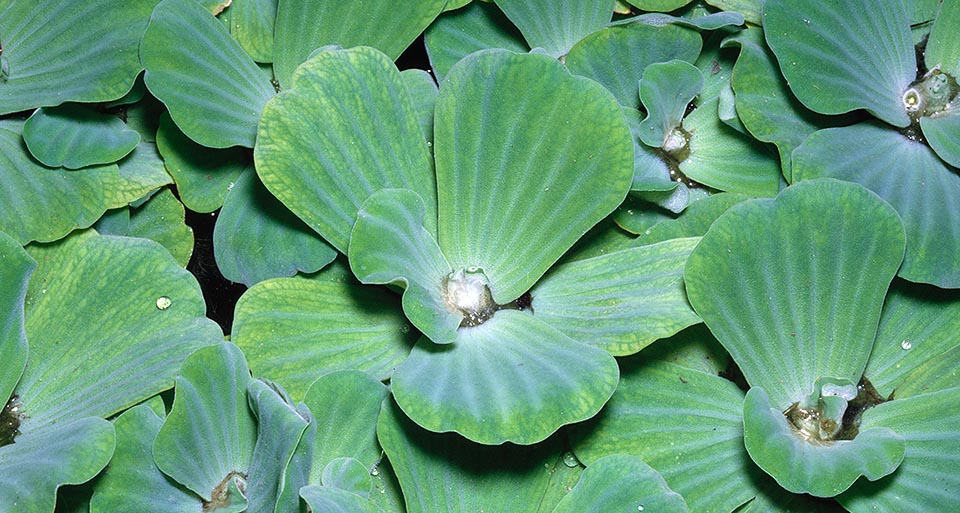 Many tropical gardens, but also those under glass scattered in the world, compete in cultivating the Amorphophallus titanum that with its 3 m phallic inflorescence once did astound the natives and nowadays does attract the tourists.
The family of the Araceae presently (2015) counts following genera:

→ To appreciate the biodiversity within the ARACEAE family please click here.

Araceae was last modified: May 18th, 2018 by Giuseppe Mazza