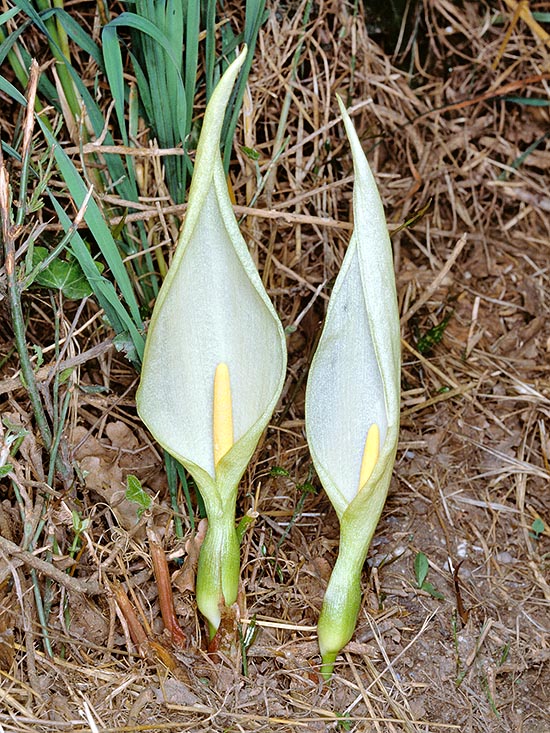 In the springtime Arum italicum has whitish spathes that can reach the 30 cm. They concentrate the sun rays and in the basal zone, that emits a strong odour of rotten meat, the temperature can often reach inside the flower 10 °C more than the surrounding ambient © Giuseppe Mazza

The genus Arum, includes 25 species of herbaceous, perennial, tuberous or rhizomatous plants, with all basal leaves and spathe shaped inflorescence, native to Europe, North Africa and western Asia, with the largest number of different species concentrated along the perimeter of the Mediterranean basin.

The origin of the name of this genus is controversial: after some authors it should come from the Greek “Aron” (and also after other etymologies it goes back to the Hebrew “Ar”); both terms mean “warmth”, referred to the characteristics of these plants to produce and maintain the warmth in the “chamber” formed by the base of the spathe during the blooming period.

After others, it should come from the Pontiff Aron, after others from the term “Aron”, name used by the old Egyptians for the Colocasia antiquorum, known as Egyptian Arum, Egyptian Bean, or Taro (native to SE Asa), in the old times cultivated for the edible cooked tubers and the leaves.

The Italian vulgar name of gigaro, after the Greek Dioscorides, comes from the Etruscan language.

Arum italicum Mill. (1768), is a species with natural Steno-Mediterranean distribution, but is nowadays present in southern and western Europe up to some locations in England.

It is also known as Italian arum, Italian lords-and-ladies, Serpent bread, Grass snake, etc.; it is a perennial herbaceous plant 30 to 70 (< 100) cm tall, with 3-5 cm ovoid tuber, horizontal, with 4-7 leaves, all basal, spiralled, developing in the autumnal season and persisting in winter till the following spring.

They have a 20-30 cm petiole which supports an astate to astate-sagittate (7-22 x 10-30 cm), lamina, glossy, with one lanceolate apical lobe and two basal ones, usually divergent, little smaller. 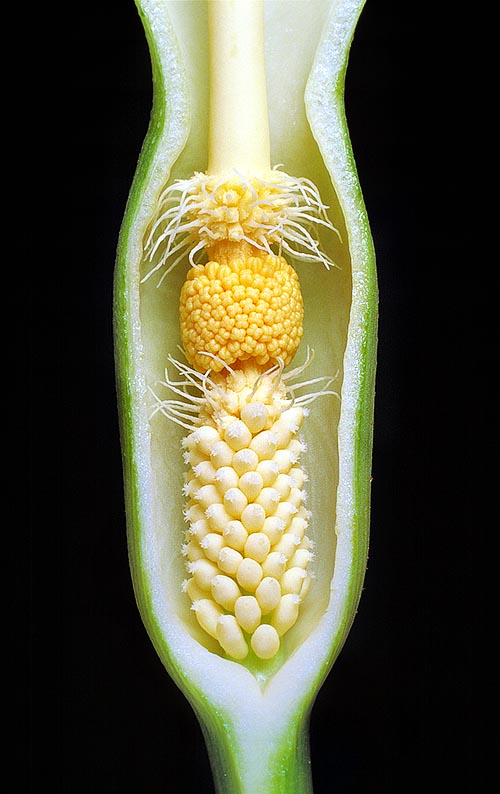 If we dissect the spathe base we find a real trap for flies and similars insects looking for food in a warm place. Upward sound hairs facing down, then the male inflorescence and below other hairs facing up that block the insect at the centre. When the male flowers ripe, these wither and the prisoners covered by pollen are entitled to an ampler cell to fecundate the female inflorescence. Only after fecondation, the upstanding hairs wilt and the poor ill-fated insects are again free for visiting other Arums © Giuseppe Mazza

Mostly, the leaves have on the upper lamina, especially along the nervations, some whitish veins.

The inflorescence is formed by a 5-9 x 15-30 cm spathe, white-yellowish, rarely reddened on the edge, with 4,5-5 cm tube; 7-9 cm spadix (usually shorter than half spathe), with almost cylindrically shaped appendix of colour yellowish to yellow-cream, as long as the peduncle or little less and a fleshy axis on which develop the properly called and small flowers: the female ones at the base, the male higher than these.

The blooming takes place from March to May; the fruits ripen from late July to September and are assembled in dense almost cylindrical infructescences; they are spherical 0,8-1,2 cm berries, fleshy, glossy, initially ivory white, then green, orange and finally coral red.

As is the case of most species of the genus Arum, also in Arum italicum, during the blooming the inflorescence emits an unpleasant odour of rotten meat thus been able to attract flies, blowflies and other dipterans, coleopterans and numerous other insects for ensuring the pollination.

The self-pollination is avoided thanks to the early ripening of the female flowers.

The dissemination is done by birds and small mammals.

The insects are attracted by the odour emitted by the spathe, by the sugary substances produced by the inflorescence and by the “catabolic” temperature, of various degrees higher: from 5 to 10 (14) °C than the ambient one produced inside the spathe wrapped like a chamber also thanks to the warming of the sun rays conveyed by the paraboloid dimetric shape of the spathe (always facing south) on the line of the inflorescence.

The spathe, that wraps like a funnel the inflorescence, narrows with a bottleneck at the level of which are located, along the floriferous axis, some sterile flowers provided of long appendices facing down and therefore easily overcome by the entering insects, who, after having nourished, try to get out and cannot do it, consequently they look, inside the “floriferous chamber” other exits, succeeding with their comings and goings, to ensure the fecundation thanks to the pollen they carry from the loot collected from other specimens.

Once the fecundation has occurred, the hairs sag, the spathe shrivels and the insects are again free to visit other specimens of Arum. 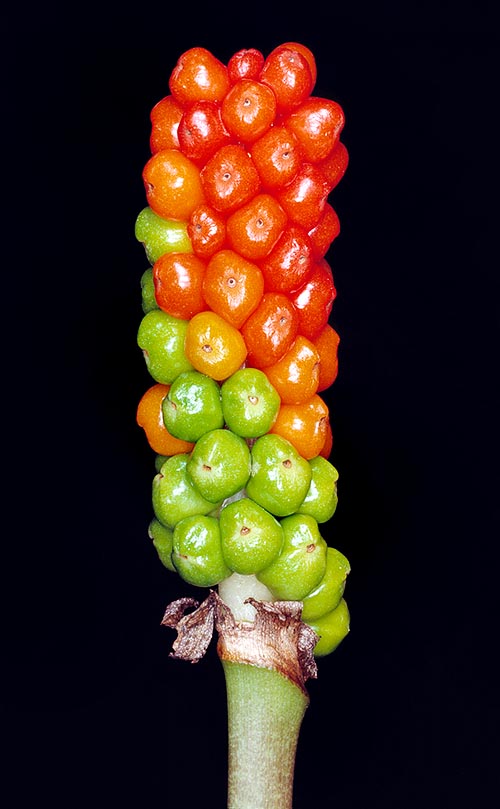 The Italian arum grows in the copses, thickets, clearings, fences, grassy margins of roads and ditches, disturbed lands, vineyards and olive groves, from the plain up to 800 (rarely up to 1300) metres of altitude.

Arum italicum is a toxic plant when fresh, with acrid and pungent flavour that contains volatile alkaloids of coniinic type (aroine, arodine and aronine), trigioquinine, nicotine, lignans, lecithins, flavonoids and mucilage; moreover, in the fruit and the rhizome are present glucose starch (70%), oxalic acid, gums, glycosaponins, and a glycoside freeing hydrogen cyanide.

In the leaves is present a high content of vitamin C.

Diuretic, expectorant, antirheumatic and anti-gout properties, as well as resolvent for external use, but due to the intrinsic toxicity the use is nowadays practically abandoned.
The diffusion of the plant, often even cultivated in the gardens as ornamental species, is frequent cause of intoxications in the children, attracted by the nice colour of the fruits and the taste, initially sweetish, but immediately after burning, which cause, when in contact with skin, irritation and formation of blisters and, by ingestion, inflammation of the oropharyngeal mucosa, intense salivation, nausea, vomit, cramps, abdominal pains, haemorrhages, cardio-circulatory disorders up to coma and to death in the most serious cases.

Equally poisonous is a similar species, even more common than the Italian arum, called Jack-in-the-pulpit: the Arum maculatum, easy to distinguish due to the green-violaceous, yellow-violaceous or violaceous spathe, often spotted of black or dark brown like the leaves (2 to 4) that have convergent basal lobes and clavate appendix of the purplish spadix.

In some North-European locations, in the past they utilized the tubers and the rhizomes for washing the linen instead of the soap, or for eliminating corns and warts.

In times of famine, the same were harvested, boiled for long time and they got from them an edible fecula.

As often was the case for the poisonous plants, the arum was considered in the past as a magical plant: the leaves and the inflorescences were dried up for getting a powder to be put in small charm bags against the hex.

The multiplication of this plant is done by division of tubers in winter in not too humid and without stagnations soil, placed at 6-8 cm of depth. 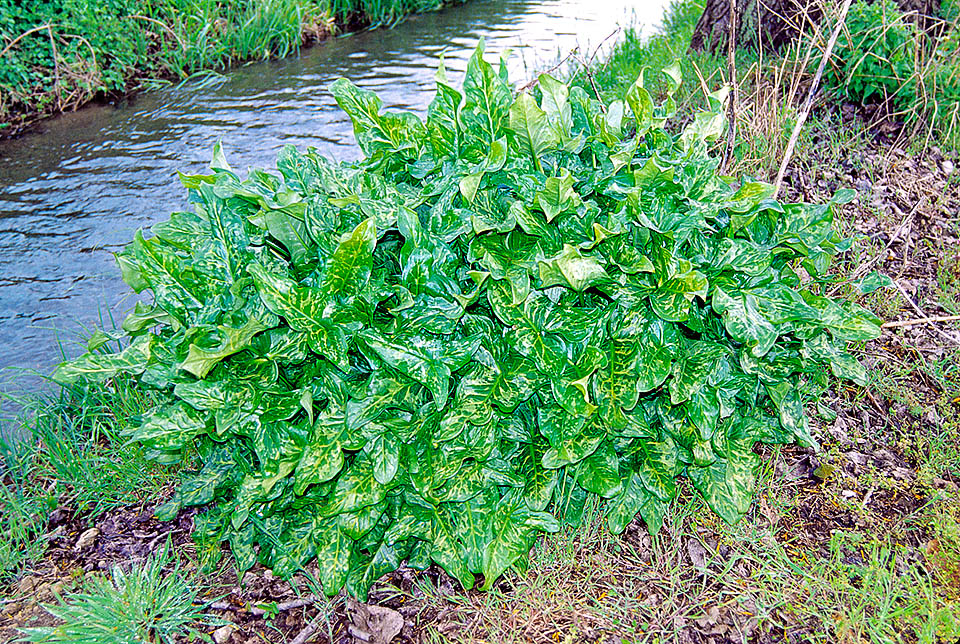 The leaves develop in autumn and last all winter. They have a 20-30 cm petiole and an astate-sagittate lamina, even 30 cm long, with clear veins © Eugenio Zanotti

→ To appreciate the biodiversity within the arum family and find other species, please click here.