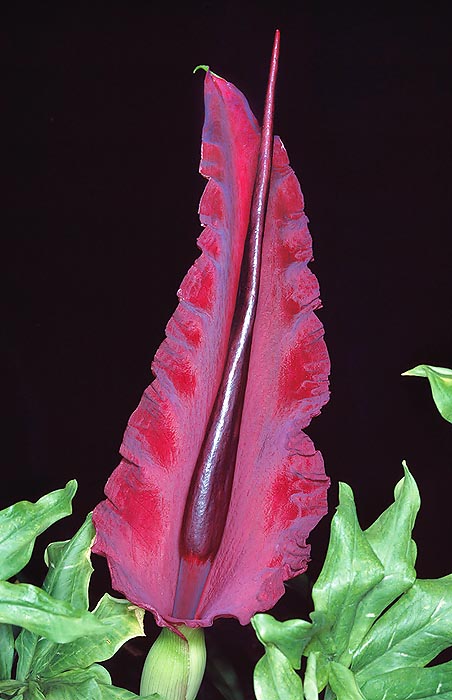 The Dracunculus vulgaris Schott (1832) is native to the central-eastern Mediterranean region (Bosnia and Herzegovina, Bulgaria, Corsica, Crete, Croatia, Aegean Islands, Italy, Kosovo, Macedonia, Montenegro, Sardinia, Serbia, Sicily, Slovenia and Turkey), where it grows in the under wood and also in clearings and on rocky soils.

The name of the genus comes from the Greek “draco” = dragon, snake, hence, “dracunculus” = little snake; the name of the species is the Latin wording “vulgaris” = common.

Rhizomatous, deciduous, perennial herbaceous, with a pseudo-stem tall up to 0,5-1,5 m, greenish white, variously spotted of dark green, almost black, or dark purple, and 2-4 pedate leaves (leaves with a lamina holding two central nervations, both endowed of lobes only, towards the exterior), 30-40 cm long, with 6-15 lance-shaped lobes, sharp on the apex, of an intense glossy green colour with thin white linear dots.

The inflorescence is formed by a spadix which can reach, in some cases, with its long terminal appendix, the metre of length, even if, usually, it is not longer than 40-50 cm, of a dark purple colour, almost black, surrounded by a little longer spathe with waved edges, internally, of a velvety purple colour, green externally, closed at the base, thus forming a floral bulb-shaper chamber which acts as a trap for the insects; the flowers are protogynous unisexual (the female flowers are receptive before the ripening of the male ones: this avoids the self-fertilization), disposed at the base of the spadix in the enclosed part of the floral chamber, with the female flowers occupying the lower part and the male the upper one. The fruits are pear-shaped berries, 1-2 cm long and orange red when ripe, containing few compressed brown seeds, 4-5 mm long. The inflorescence, particularly the sterile appendix of the spadix, exhales a nauseating stink of rotten meat, associated with a raise of temperature of the same, which attracts the pollinating insects. It reproduces by seed, needing three to five years for the first blooming, or by division of the rhizomes during the vegetative rest.

Very ornamental plant thanks to the stems and the foliage, and also to the spectacular inflorescence, which, luckily, emanates its disgusting smell, usually, for one day only. It is cultivable in full sun, or partial shade, paying attention to inter the tuberous roots at a depth of about 15 cm in a rich and well drained soil, kept sufficiently humid during the vegetative time; about its resistance to low temperatures, it seems that it can bear, at the rhizome level, and well mulched, temperatures up to -20°C, it is anyway to be sheltered from late freezes at the time of the vegetative wakening in spring. It blooms by late spring, or early summer, depending on the climate.

All the parts of the plant contain possible irritating substances.

→ To appreciate the biodiversity within the arum family and find other species, please click here.