Arum : a trap for the flies

Common in our climates, the Arum kidnaps flies for pollination. To the same family belong many house plants. 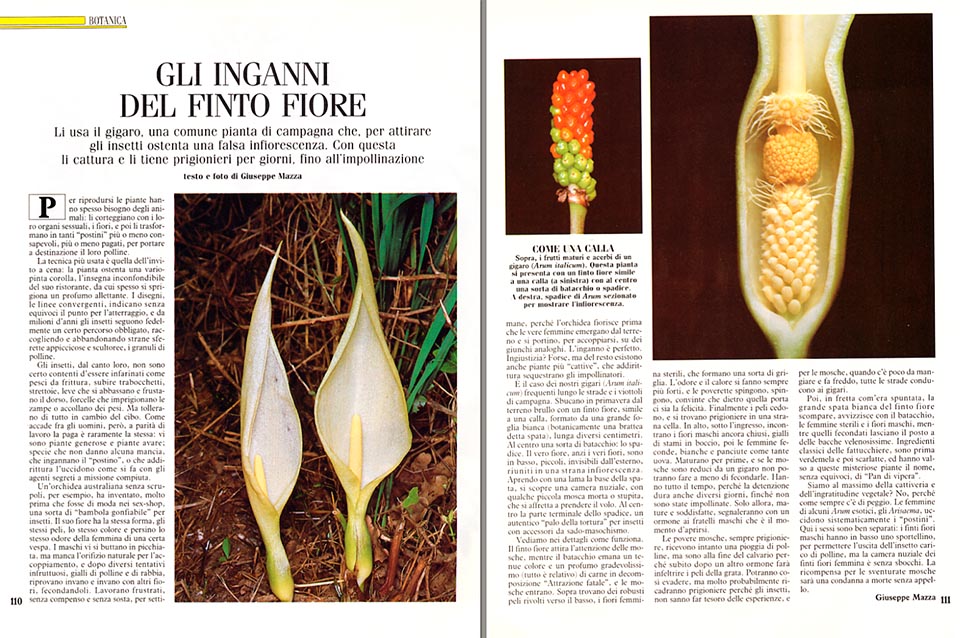 For the reproduction, plants often do need animals.

They court them with their sexual organs, the flowers, and then they transform them in many “postmen”, more or less conscious, more or less rewarded, for carrying their pollen to destination.

The most used technique is that of the invitation to dinner.

The plant exhibits a many-coloured corolla, the typical insignia of its restaurant, from which often is released an alluring scent.

The drawings, the convergent lines, indicate without any doubt the landing place, and since millions of years, the insects follow faithfully a certain compulsory route, picking up and then laying down odd sticky and finely built small spheres, the granules of pollen, where rest the spermatozoa of the species.

They will not be woken up, as in the tales, by the kiss of Prince Charming, but, if they will be lucky, by that of a princess, who, through the stigma, from the ovary, will shake them with a hormone, as soon as they will reach their destination.

The insects, for their part, are not by sure happy to be floured like frying fishes, to endure pitfalls, narrow passages, levers which low down and whip their back, forked sticks which lock their paws or burden them of weights, but tolerate everything in exchange of food.

I feed you, and you fecundate me: this is the typical agreement.

As it happens for men, however, with the same work the salary is seldom the same: there are plants generous and other ones miser; species which do not give any tip, which cheat the “postman”, or which even kill him, as it is done with secret agents, once the mission is accomplished.

An unscrupulous Australian orchid, for instance, has invented, much before that it came modern in the sex-shops, a sort of “inflating doll”, for insects.

Its flower has the same form, the same hair, the same colour and even the same smell of the female of a certain wasp.

Males nosedive there, but the natural orifice for the coupling is missing, and after several unsuccessful attempts, yellow of pollen and of rage, they try again in vain and in vain with other flowers, fecundating them.

They work, frustrated, without any reward and without stopping, for weeks, because the orchid flowers before that the real females come out from the soil and go, for coupling, on similar rushes. The sham is perfect.

Depravity? Injustice? Maybe, but in love and in war, we know, everything is permitted.

Besides, “worse” plants exist, which even sequester the pollinators.

This is the case of our Arum, common along the country roads and paths.

They come out in springtime from the bare ground, with a false flower, similar to a calla lily, formed by a large white leaf (botanically a bract called spathe), several centimetres long. At the centre, a sort of a pole: the spadix.

The real flower, better, the real flowers, are down below, small, invisible from outside, assembled in an odd inflorescence.

If we open with a blade the base of the spathe, we discover a nuptial room, with some small floes, dead, or surprised, which hurry to run away.

At the centre, the terminal part of the spadix, a genuine “rack pole”, for insects, rich of sadistic-masochistic accessories.

Let us see, in details, how it works.

The fake flower attracts the attention of the flies, while the pole emanates a slight warmth and a very pleasant scent (all is relative!), of putrefying meat. “Fatal attraction”, and the flies go in.

Above all, they find sturdy hairs turned downwards, the sterile feminine flowers, which form a sort of grating. The smell and the warmth get stronger, and the poor flies push and push, convinced that behind that door there will be the happiness.

At last, the hairs subside, and they are prisoners in an odd cell.

Upstairs, under the entrance, the meet the masculine flowers, still closed, yellow for the stamens in bud, then the females, fecund, white and big-bellied like many eggs.

They are the first to ripen, and if the flies are coming from an Arum, they will be fecundated. They have plenty of time, because the imprisonment lasts even various days, till when they are pollinated.

By that time only, ripe and satisfied, they will inform their brothers, with a hormone, that they can open.

Even if in the flowers the two sexes are often close, nature detests incests and takes all precautions to hinder them.

The poor flies, always prisoner, receive in the meantime a shower of pollen, but they are reaching the end of their troubles, as immediately after, another hormone will felt the hairs of the grating.

They will be able to escape, but most probably they will have no time for tanning, as insects do not know how to make treasure of their experiences, and for the flies, when there is not much food and it’s cold, all the routes lead to the Arum.

Then quickly as it had risen up, the great white spathe of the false flower disappears, fades with the pole, the sterile females and the male flowers, while those fecundated make room to some very poisonous berries.

Classical ingredients of witches, they are at the beginning, green coloured as apples, then scarlet, and they have given to this mysterious plants, the name, quite clear, of “viper’s bread”.

Have we reached the top of wickedness and of vegetable ingratitude?

No, because there is always something worse.

The females of some exotic arum, the Arisaema, systematically kill the “postmen”.

Here the sexes are well separated: the fake male flowers have a small door down below, in order to allow the insect, loaded of pollen to get out, but the nuptial room of the false female flowers has no exits.

The reward for the unfortunate flies will be a death sentence, without appeal.

→ To appreciate the biodiversity within the ARACEAE family please click here.