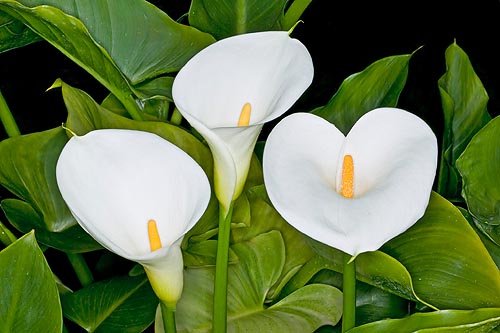 The Zantedeschia aethiopica (L.) Spreng. (1826) is native to Lesotho, RSA and Swaziland, where it colonizes wide areas.

The genus is honoured to the Italian physician and botanist Giovanni Zantedeschi (1773-1846); the Latin name of the species, “aethiopica” = of Ethiopia, comes from the fact that by the time of Linnaeus, who described it under the name of Calla aethiopica, such wording was identifying the whole central and southern Africa.

Semi-marshy rhizomatous, perennial, evergreen or semi-deciduous herbaceous, with arrow head shaped leaves of a glossy dark green colour, 20-40 cm long and 10-20 cm broad, on fleshy petioles, 0.6-1 m long, even more when in its natural habitat, directly from the rhizomes.

The long-lasting inflorescences are formed by a yellow spadix, 6-10 cm long, contained in a white, funnel-shaped spathe, 10-20 cm long, with curved edges, shaded of green at the base; the flowers are unisexual, the male ones occupy the upper part of the spadix, the female ones are grouped in the lower part for about one fifth of its length, but self-fertilization is avoided due to the different times of ripening, trick which favours the cross fecundation.

The yellowish fruits are globose berries of about 1 cm of diameter, containing several seeds. It usually reproduces by division; when by seed, it will need from three to five years before getting the first blooming.

In the tropical and humid subtropical zones, it behaves always as an evergreen, whilst in the climates with marked seasonal changes it behaves as a semi-deciduous, going to rest, and losing the leaves for a short time during the dry season.

When cultivated in open spaces, it requires a location preferably in full sun, in porous and draining soils, rich of organic substance and kept constantly humid, it can also be cultivated in basins or ponds with the base submerged by some centimetres of water; in the rather dry climate areas, some shady location is to be preferred.

The leaves get damaged already with temperatures around the 0°C, or little less, but the rhizomes can remain interred also in the zones where are possible temperatures of about -8°C, provided well mulched, otherwise, it can be cultivated in pot, but in this case it is to be sheltered in a protected location, or cultivated as a deciduous, drying up the substratum in order to wither up the leaves and to keep the rhizomes in a dry and ventilated place for, later on, re-interring them when the temperatures are suitable.

The plant is often cultivated in greenhouse for the production of cut flowers, also the leaves are often utilized in floral compositions.

When in too much compact and poorly ventilated soils, it is easily the prey of fungal and bacterial infections, particularly the Erwinia carotovora, which can be lethal.

All parts of the plant contain toxic substances, in particular calcium oxalate, which can cause reactions, even serious, if chewed and swallowed.