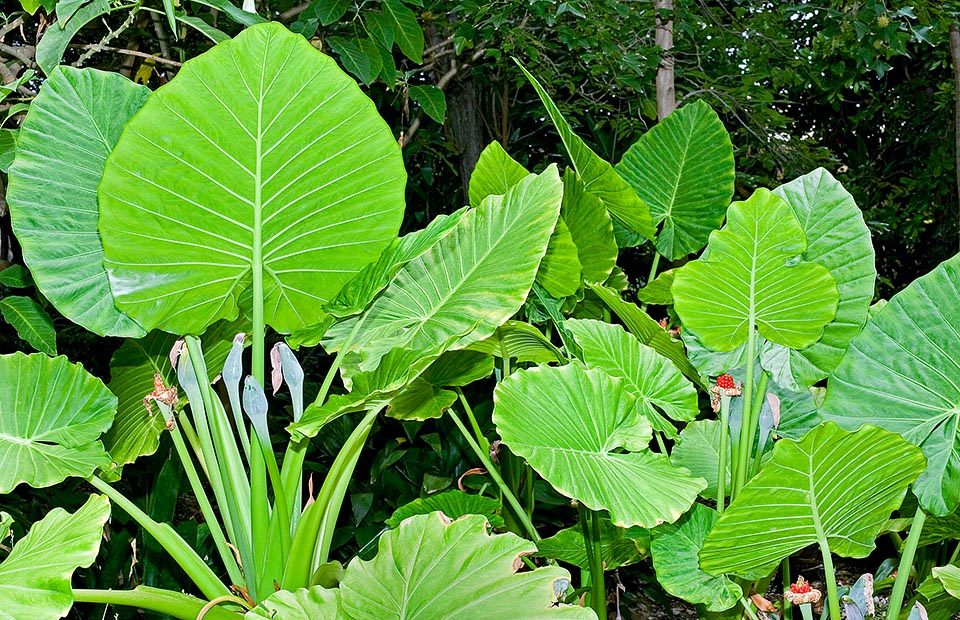 Alocasia macrorrhizos vulgary known in the tropical and subtropical gardens as Elephant's ear is native to South-East Asia. Rhizomatous herbaceous with partially underground stem that may reach the two metres of height. The one metre long and 90 cm broad leaves are almost erect with 150 cm petioles © Giuseppe Mazza

The name of the genus comes from the name of another genus of the same family: Colocasia; the name of the species is the combination of the Greek words “makros” = big, and “rhiza” = root, with obvious meaning. 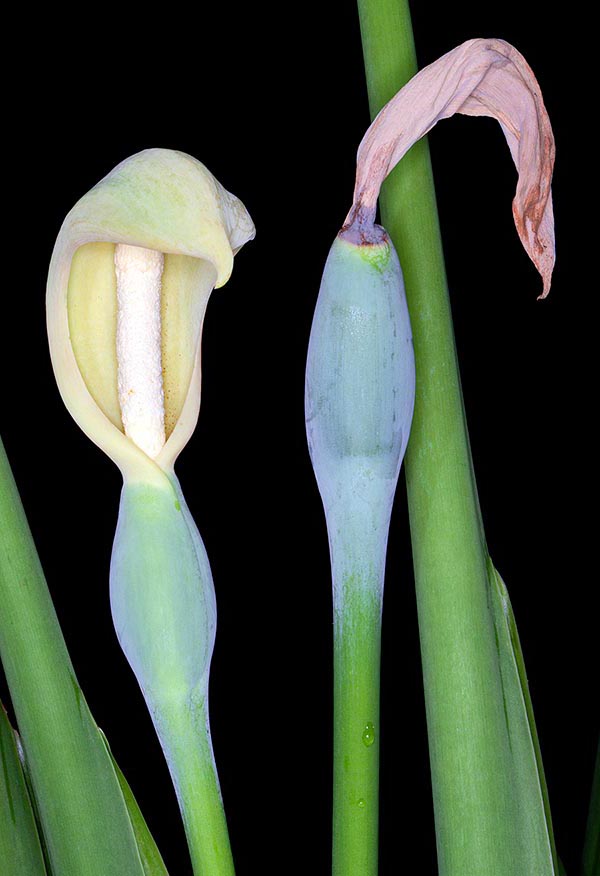 The 15-30 cm long spathe protects the male and female flowers ripening in different times. Inside, in the spadix zone reserved to males, the temperature can raise 10-20 °C more than out for about 40 hours, time needed to pollinate the pronubi that are attracted by the warmth and the smell © G. Mazza

Rhizomatous, evergreen herbaceous with stem, partly underground, which in the old plants can reach the height of 2 m, with a diameter up to about 20 cm; petioles long up to 1,5 m and leaves cordate-ovate, long up to 1 m and 90 cm broad, almost erect, with the edges slightly undulated, of an intense glossy green colour.

Inflorescence formed by a yellowish white spathe, 15-30 cm long and about 5 cm broad, enclosed and tubular at the base for about 4 cm, and by an about 10-30 cm long spadix with the female flowers occupying the lower part for about 2 cm of length, separated by a sterile zone of about 1 cm from the male ones, distributed over a length of about 7 cm and ending in a sterile appendix of bronze colour and 7-20 cm long.

The flowers are protogynous (the female flowers are receptive before the ripening of the male ones, thus avoiding self-fertilization); the pollination happens thanks to insects attracted by the smell emitted by the spadix and by the simultaneous increase of temperature. This, which concerns the male part of the spadix, and even more the sterile appendix, lasts about 40 hours, with an increase of temperature of 10-20°C, with respect to the local one.

The fruits are ovoid berries, of a bright red colour when ripe, about 1 cm long. It reproduces by seed, rhizomes division and portions of stem.

Impressive plant which can be cultivated in full sun in the tropical and humid subtropical zones or in partial shade; it can be cultivated in temperate areas, where, on the contrary, it tends to lose the leaves in winter, even if it can resist, at rhizome level, provided well mulched, to temperatures around -8/-9°C.

It is not particularly demanding about soil, which must be kept constantly humid during the vegetative time. It can be cultivated in pot in porous substrata, draining and rich of organic substance, for the decoration of vast and luminous spaces, with temperatures over the 12-14°C, in order to avoid leaf damage.

At times, the rhizome and the stem are utilized, in the zones of origin, for animal consumption and, time ago, during famine periods, also for human alimentation, provided cooked previously for long time, in order to eliminate the toxic substances contained, in particular the calcium oxalate, which can cause serious reactions if chewed and ingested when raw; even the contact with the sap can cause allergic reactions.

The leaves, when broken, emit a smell of bitter almonds due to the presence of Prussic acid (cyanide), about 30 mg of HCN/kg, which is also present, in less extent, in the stem. 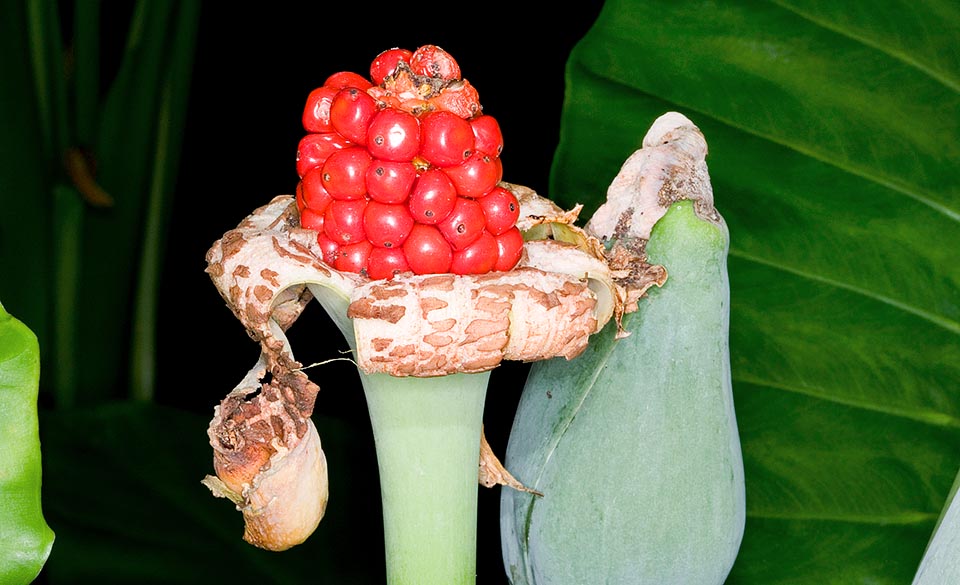 The fruits bright red when ripe, are about 1 cm long ovoidal berries. Rhizome and stem are poisonous but edible after long cooking © Giuseppe Mazza