Aizoaceae : flowers which open at noon

The strange flowers of noon. They belong to the group of mesembryanthemaceae, 2300 species, 99% of which from South Africa and succulent. Fruits are ” intelligent ” capsules, that open only when it rains. To protect themselves from herbivorous, leaves contain narcotic substances, similar to cocaine. Most of the flowers open at noon. 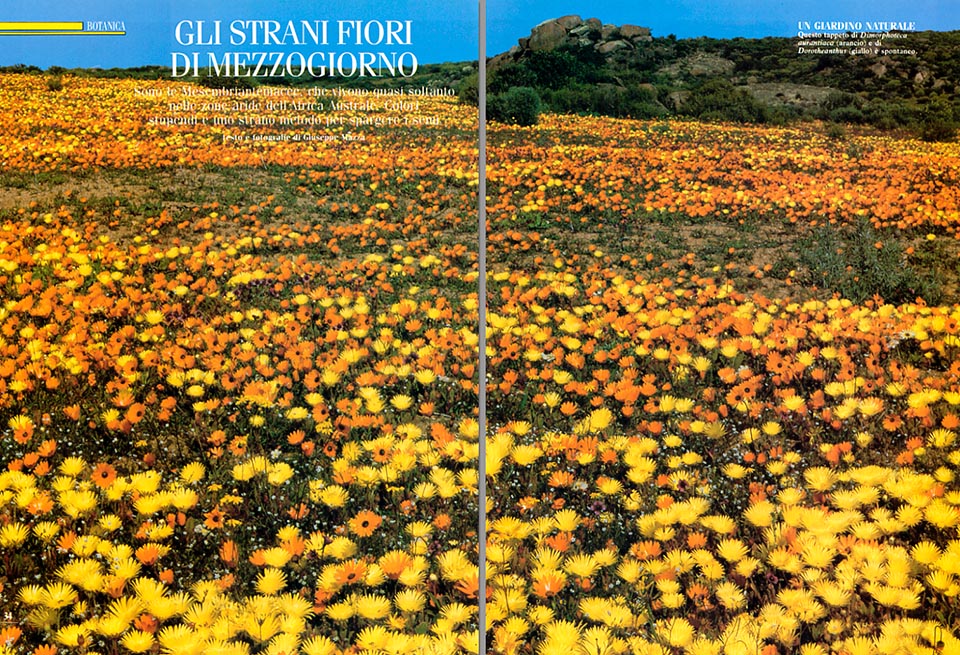 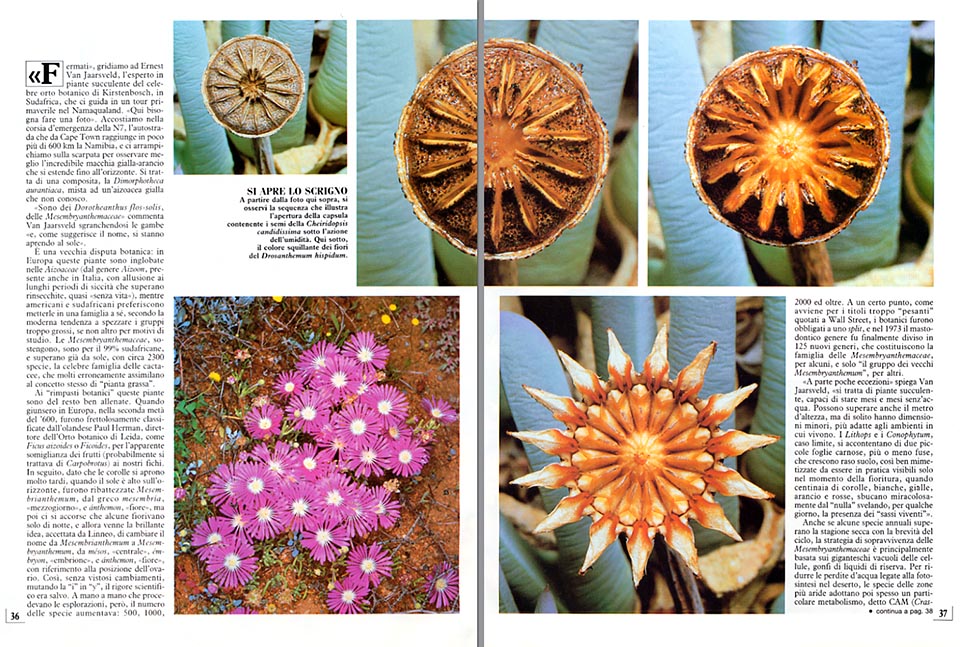 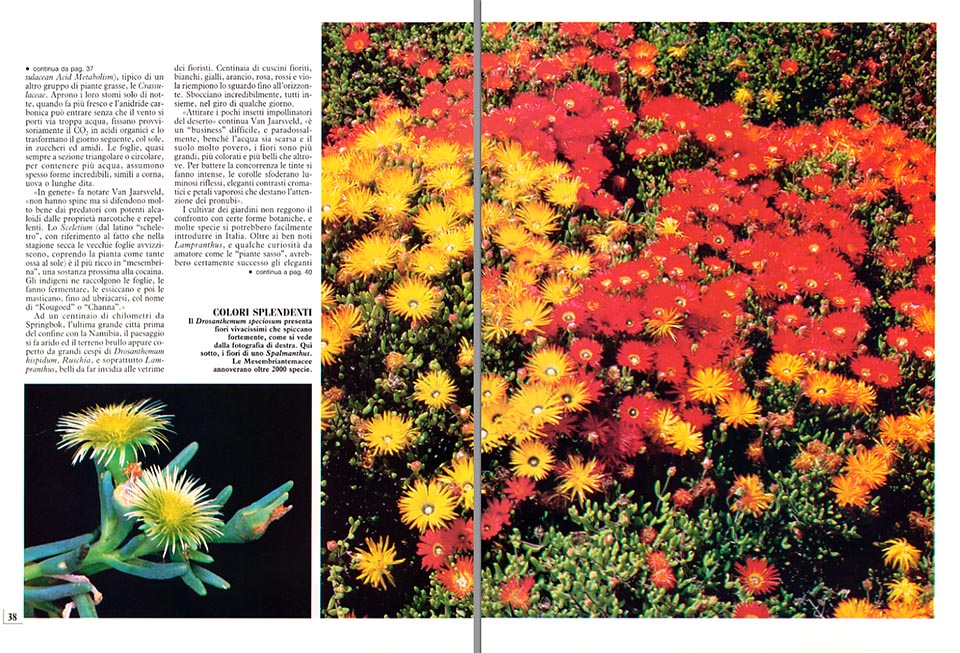 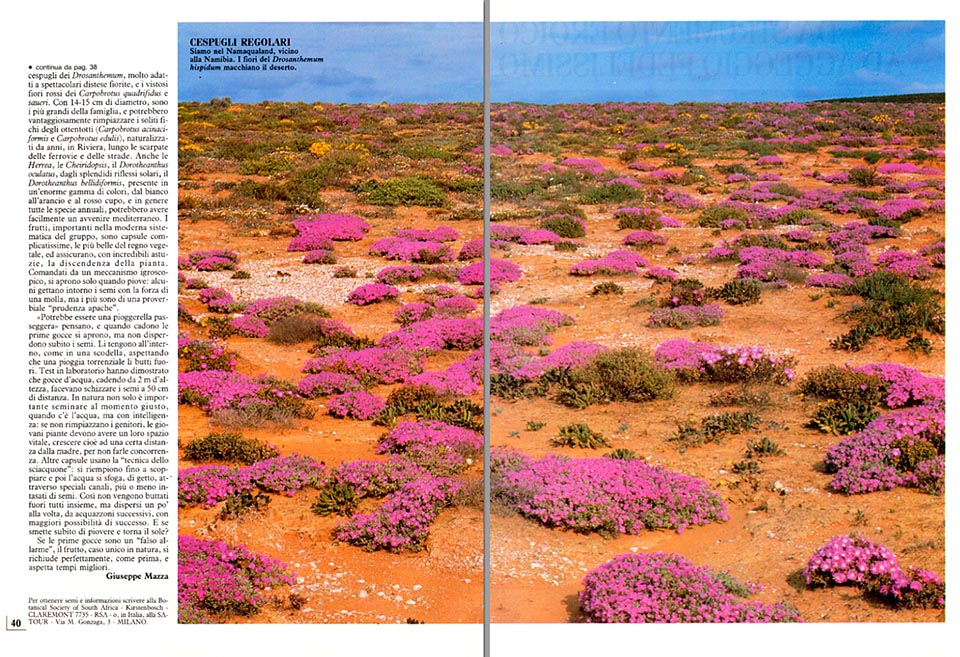 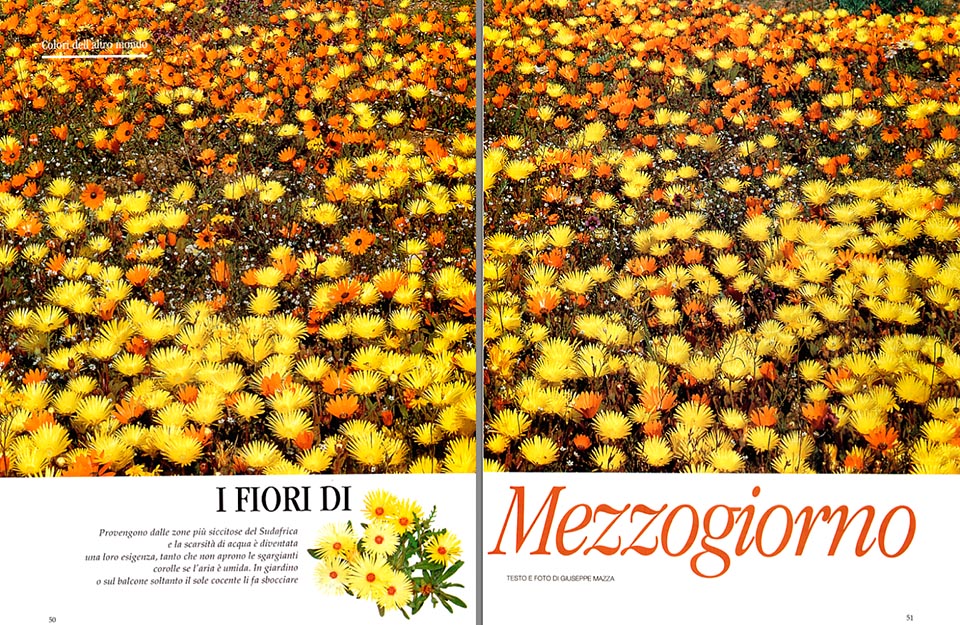 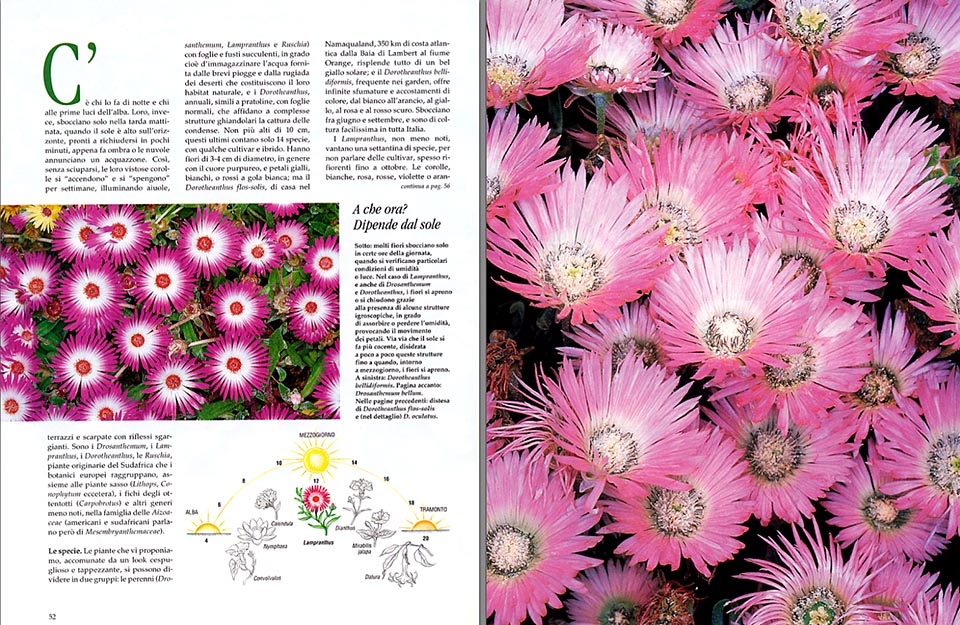 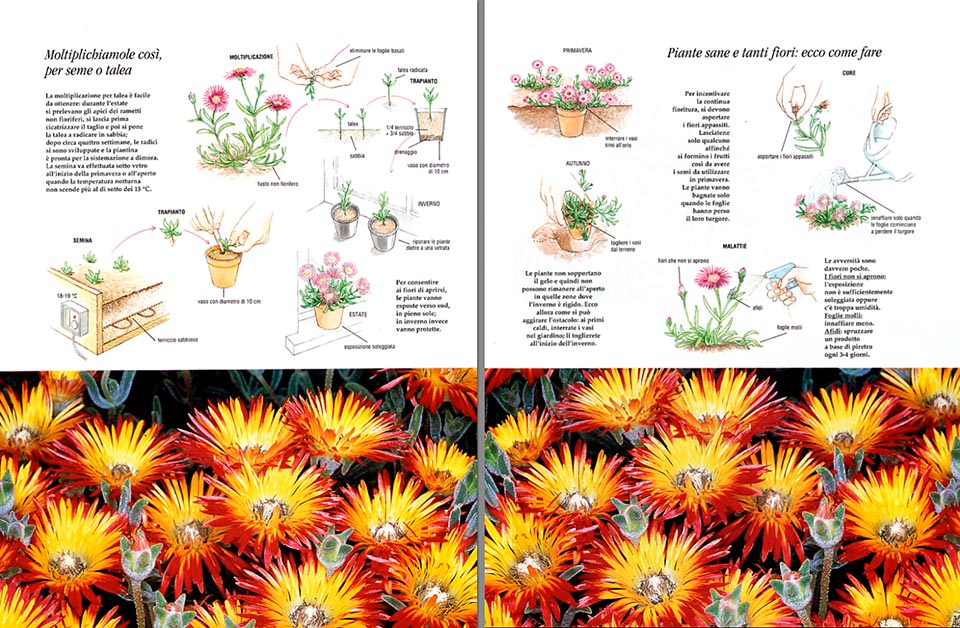 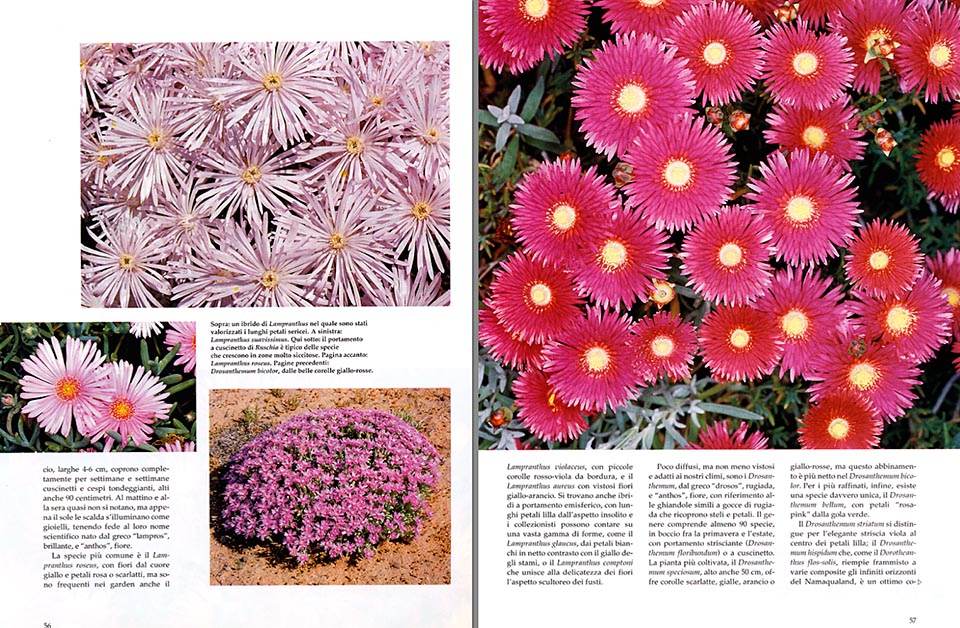 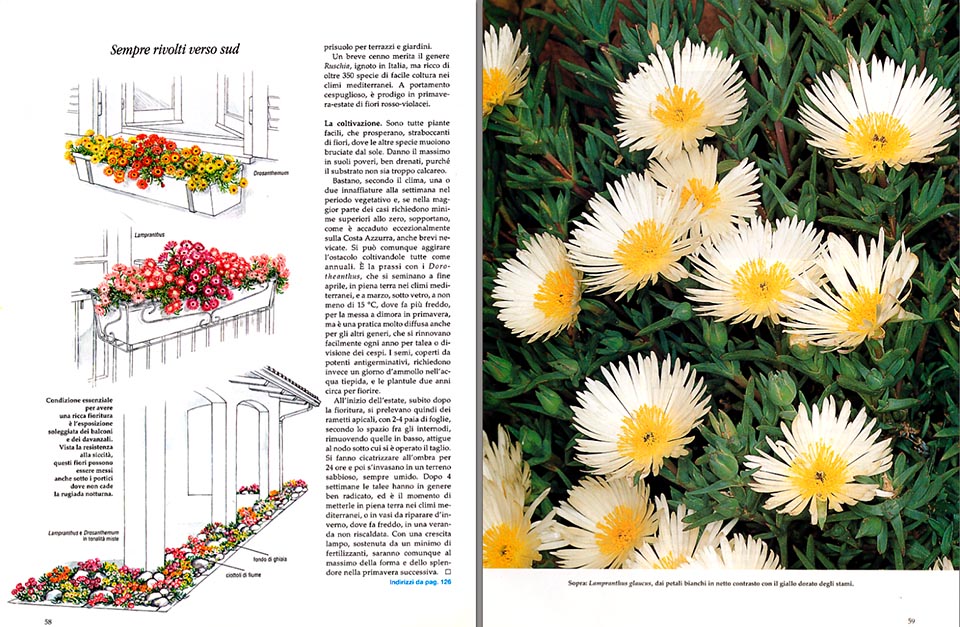 Zoologists reconstruct the evolution of animals through the examination of the bones, botanists get that of plants from the flowers.

As it can be immediately noticed, while comparing the human pairing organs to those of other mammals, nature is, in fact, very traditional about sex; and seen that flowers, which are the modern reproductive structures of the vegetable kingdom, evolve more slowly than leaves and stems, following this thread of Ariadne, we can, even in absence of flowers, classify the vegetables, or, which is the same, lay down their history.

From about 300 great architectural projects of the flower, have thus come to life as many families of plants, more or less known or important, among which is conspicuous the one of the Aizoaceae, with more than 2.300 species.

Here, the flower, with innumerable stamens at its centre, which transform in radiated petals at the periphery, recalls, at sight, a daisy, but, far from being a “mini-bouquet”, that is the union in an inflorescence of many small corollas, it’s a “single” of good size, individualist, and proud of its stem.

Unlike asteraceae, practically spread out in all climates, it’s matter then of succulent plants, with reserves of water, made for living in hot and dry lands, close to the deserts, and even more habitual than the lawn daisies, their flowers do open for attracting insects at fixed hours, usually by noon, when the sun is high in the sky.

For this reason, after the gross classification error of the first Carpobrotus, which came in Europe by the second half of 1600, and placed, due to the shape of the fruit, among the figs, under the name of Ficus aizoides, or Ficoides, by the Dutch Paul Herman, director of the Botanical Garden of Leiden, all these plants were renamed Mesembrianthemum, from the Greek mesembria, “mid-day”, and anthemon, “flower”.

But then they realized that some of them were blooming only during night time, and then the brilliant idea, accepted by Linneus, came, to change the name from Mesembrianthemum to Mesembryanthemum, from mésos, “central”, émbryon “embryo”, and anthemon “flower”, with reference to the position of the ovary.

In this way, without showy changes, mutating the “i” in “y”, the scientific rigour was preserved.

At a certain moment, botanists were obliged to do a “split”, and , in 1973, the huge gender was finally divided into 125 new genders, inserted in the family of Aizoaceae (from the gender Aizoon, spontaneous also in Calabria, between Capo dell’Armi and Capo Spartivento, referring to the long drought periods, which these plants overcome dried up, almost “lifeless”), for Europeans, and in that of the Mesembryanthemaceae, for Americans and South Africans.

Beyond the botanical debates, even if the family has some lovely specimen in Europe, America, and Australia, it’s a 99% South African species.

The equivalent of the cactus, in the Old World, but with more ingenious and elegant survival techniques.

Even if accumulating, like all succulent plants, reserves of water in the huge vacuoles of the cells, many Aizoaceae are not in fact satisfied with swelling and deflating like an accordion, but they reduce the losses of water due to the photosynthesis in dry habitats, with a particular metabolism, called CAM (Crassulacean Acid Metabolism), discovered, for the first time, in another group of succulent plants, the Crassulaceae.

They open their small mouths, the stomata, only during the night, when it’s cool and the carbon dioxide can enter without the entrance of the ardent desert wind, which can take off, in a flash, the already poor water reserves; they fix temporarily the CO2 in organic acids; and with a double efficiency, compared to the Cactaceae, they transform it, the following day, with the sun, in sugars and starches.

And then, instead of defending themselves vulgarly and fiercely, with thorns, from the appetite of the herbivores, they are specialized in the chemical war, and, only case among the plants, the often hide, with incredible mimetic structures.

Almost always, the leaves contain some powerful alkaloids, with narcotic and repellent properties, such as the “mesembrine”, a substance close to the cocaine, which reaches the maximum concentration in species like the Pleiospilos and the Sceletium (from the Latin “skeleton”, referring to the fact that during the dry season the old leaves fade, covering the plant, like many bones, under the sun), so that natives pick up the leaves, and after having dried them up, chew them till when they are drunk. They call them “Kougoed”, or “Channa”.

And some species, like the Lithops, Conophytum, Argyroderma, Ophthalmophyllum, Fenestraria and Pleiospilos, imitate perfectly the stones.

Plants reduced to the least terms by the difficult habitat conditions, which generally are satisfied in having a couple of roundish laves, more or less buried in the sand, with mimetic drawings, colours and prominences, which reproduce perfectly the morphology of the surrounding rocks.

Here the skin is as hard as plastic, in order to reduce water losses, and the sun passes, almost always, through a “skylight”, placed above, at the level of the ground, to reach, with special optical fibres, the heart of the leaf, where the miracle of the photosynthesis takes place.

But if, in nature, during the rest of the year, these species are practically invisible, during the reproductive period, abandoned any discretion, they attract the insects with showy corollas, worthy of the Guinness World Records, which overcome, as in the case of the Conophytum minusculum, even by 2-3 times the size of the plant.

The leaves, usually with triangular or circular section, in order to contain more water, assume in the Aizoaceae forms often incredible, similar to fingers, horns, or eggs; and the fruits, important in the modern group systematics, are almost always very complicated capsules, the most beautiful in the Green World, rich of ruses which assure the descent of the plant.

Commanded by an hygroscopic device, they open only when it rains: some of them throw around the seeds with the strength of as spring, but, normally, they are very much discreet.

It is not sufficient, in fact, that the sons come to life fare away from the mother plant, where they will never enter in competition for the resources, but they must be sure to have all the water which may be necessary for their growth.

Then, just wet, the fruits bloom at sight, like flowers, but they do not scatter the seeds.

They keep them in the centre, in a bowl, and await till when a heavy rain throws them out, sending them far away into the ephemeral water puddles of the desert.

Other capsules use the “flushing technique”.

They fill up completely, and then, under the weight, the water bursts with a jet through special vessels, more or less clogged by the seeds, which therefore are not set free all together, but dispersed slowly, under successive showers, with major possibilities of success.

If, on the contrary, there are only a few drops of rain, and then same ceases, the fruits, unique case in nature, close perfectly, as new, and wait for better times, for months or years.

In less arid areas, there are transition species, with more showy leaves, such as the Cheirodopsis, the Cylindrophyllum, and the Conicosia, till veritable and proper bushy forms, such as the Drosanthemum, the Lampranthus, and the Ruschia, which can get close the metre of height, and enlighten for weeks with their flowery tufts, white, yellow, orange, pink, red, violet and two-coloured, the boundless South African horizons.

The Ice Plants (Carpobrotus sp.), which bloom regardless to the saltiness even between the sea sand, are by now naturalized since centuries along our coast lines, colonizing often the slopes of the rail tracks, and the roads; but almost all the Aizoaceae might have a Mediterranean future, because they are suitable for embellishing, without much maintenance, stony gardens and sunny roofs.

And a major room would deserve also the few annual non succulent species of the family, such as the Dorotheanthus, available with a wide range of colours, and mentioned often in the catalogues under the old name of “Ficoides”.

How are Aizoaceae cultivated?

All of them require well drained, sandy, and not too much fertile soils, otherwise you will get an excessive production of leaves at the expenses of the flowers, lowest temperature over the zero, and modest watering, especially in winter, when the plants already risk to rot owing to the elevated air humidity.

Blooming is usually concentrated between April and June, but there are some Lampranthus, budding incessantly from September to June.

The Dorotheanthus, sown in springtime, blossom between July and September, and the “Stone Plants” suddenly cover themselves with showy corollas between October and November, just before winter inclemencies.

But a few species with deep roots, such as the Carpobrotus, which need a lot of land, the most part of Aizoaceae can be conveniently cultivated in a pot with a thick layer of pebbles on the bottom, for draining, and a light compound of land of leaves, orchard mould, and quartz sand.

And this enables, of course, if it’s cold, to shelter them in a veranda.

The reproduction by cutting of the Drosanthemum and of the Lamptranthus, is very simple.

It is sufficient to take off, by the end of summer, some small 5 cm branches, and plant them in wet sand, once the cut has healed.

The Carpobrotus, even easier, take root practically all the year round, in whatever soil, with the vitality of the infesting plants.

The seeds of the perennial species, to be usually washed in copious warm water, in order to dissolve the powerful germinative inhibitors, are to be spread in springtime on the sand, but it is necessary to wait for at least two years to see them in flower.

Aizoaceae : flowers which open at noon was last modified: May 23rd, 2019 by Giuseppe Mazza