The Ajania pacifica (Nakai) K.Bremer & Humphries (1993) is an evergreen herbaceous plant, cespitose or shrubby, with erect standing, compact, 20-60 cm tall, which expands by means of underground stolons, forming tufts which are even 70-80 cm broad. It has alternate leaves on short petiole, 4-8 cm long, obovate, pinnate-lobate, of an intense green colour with silvery-white margins, covered by a silvery-grey tomentum on the lower side and by a slight white down on the upper page. Terminal inflorescences of about 10 cm of diameter with compound head, that is, formed by a main axis with several ramifications ending in a head, the typical inflorescence of the Asteraceae, of 0,6 cm of diameter, formed by a roundish base, the receptacle, on which is spirally inserted a host of tubular flowers with corolla formed by five united petals of gold yellow colour, the flowers are bisexual, but the outer ring , formed by female flowers. 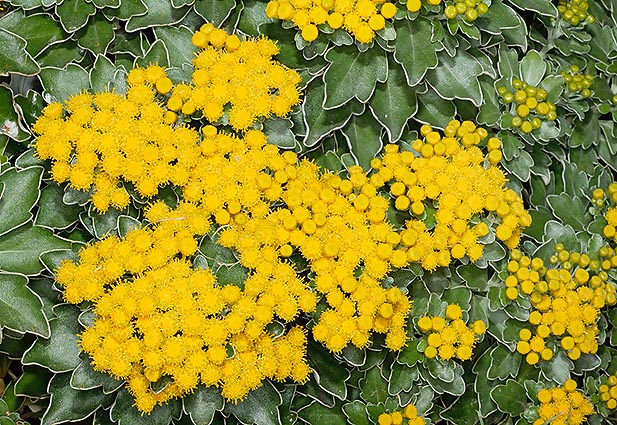 The Ajania pacifica is an evergreen herbaceous, easy to cultivate, resistant to cold © Giuseppe Mazza

The fruits, containing one seed only and called achenes (or, more correctly, cypselae) in the Asteraceae, are 1 mm long. It reproduces by seed in spring, by division, and, much easily, by semi-woody cutting in summer placed to root in soil formed for the 50% by sand or agriperlite.

Plant of easy cultivation and of great ornamental value, in particular for the colour and the shape of the foliage where are clear the strategies of adaptation to particularly adverse environmental situations.

In fact, the plant lives along the coasts in full sun, often on the dunes, on a soil which dries up quickly; as a matter of fact the leaves are close together and spirally disposed, in such a way to shade each other, the tomentose layer of the lower page of the leaves helps in reducing the evapotranspiration and the thin silvery grey down on the upper page helps in reflecting the solar radiation.

Also the bright blooming, which takes place by late autumn (it’s a short-day species), in a period when these ones are lacking, is particularly decorative and long-lasting. It is not particularly demanding about the soil, which may be even poor, provided well draining, as it is rather sensitive to the rooting rottenness due to water stagnation; in summer the watering must be regular, but spaced, so as to dry up well the soil between them.

It is fairly resistant to the low temperatures, as it may resist even to about -20 °C, and even less without protection. Ideal for rocky gardens, edges and as ground cover also in gardens close to the sea, being resistant to the marine aerosols, in full sun or in the slightest shade; it adapts well also to the cultivation in pot, with the aforementioned modalities, but with more frequent watering in summer. In order to renew the foliage, it may be pruned low by early spring or after the blooming. The cut inflorescences are long lasting, like the foliage, utilized in the floral compositions.