The species is native to Brazil (Minas Gerais and Rio de Janeiro) where it grows in the forests (Mata Atlântica) on inselberg (cupuliform reliefs of rocks mainly granitic that rise abruptly on the surrounding level with sparse or rare vegetation) or in the prairies on steep slopes, between the 600 and 1800 m of altitude.

The genus is dedicated to the second and last emperor of Brazil, Dom Pedro II de Alcantara (1825-1891); the specific name is the Latin adjective “imperialis, is,e” = imperial.

The Alcantarea imperialis (Carrière) Harms (1930) is an evergreen, herbaceous species, monocarpic, rupicolous or saxicolous, very variable, 1-1,5 m tall and of 1,2-1,5 m of diameter, formed by a short and squat woody stem surmounted by an imbutiform rosette of leaves and by a strong root system that allows the anchorage on the steep rocky cliffs and the accumulation of organic material. In the central cavity gather rain water, up to 30 liters, and animal and vegetal debris that decomposing contribute to the nourishing of the plant; this microenvironment plays also an important role in the life of several small organisms.

The leaves are oblong-linear with apex obtuse, acute or acuminate retroflexed and entire margin, ascending, coriaceous, of variable color, from intense green eventually suffused of purple at the apex and in the inferior page to wholly dark red or wine color, and covered by a bluish waxy patina, 1-1,2 m long and 7-15 cm broad. 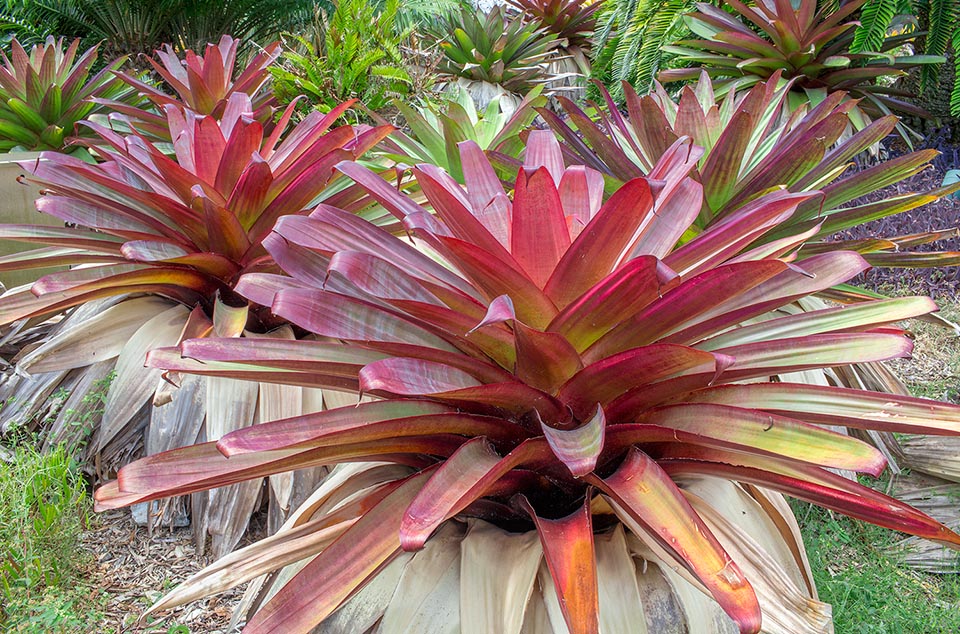 The Alcantarea imperialis is a showy Brazilian evergreen herbaceous species that easily exceeds the meter clung with solid roots to step rocky cliffs. It blooms only once and then dies, but from the base emerge, already before blooming, many new young plants. Large coriaceous and waxy leaves, of green, purple or wine color © Giuseppe Mazza

Erect inflorescence at the center of the rosette, up to more than 3 m long, formed by a robust floral scape covered by bracts of the same color as the leaves, longer than the internodes, ending in a compound raceme, that is formed by more racemes departing from a central axis. The bracts under the single racemes are elliptic with acuminate apex, about 7 cm long and broad, of reddish color. The single racemes, up to about 40 cm long, bear, arranged in two lines, numerous slightly fragrant flowers subtended by elliptic bracts, about 2,5 cm long and broad, of reddish color. Calyx with 3 lanceolate sepals with acute apex, 4-5 cm long, of reddish color, corolla with 3 linear petals with acute apex, 8-10 cm long, of white cream color, and 6 long stamens arranged in two series of 3. The great quantity of nectar and pollen produced by the several hundreds of flowers represents an important resource for numerous species of birds and insects.

The fruits are fusiform berries, 5-6 cm long, containing several thin seeds, about 0,5 cm long, provided at the two extremities of feathery appendages, more than 1 cm long, that favor their dispersion. After the blooming and fructification, lasting about one year, the plant stops growing and after a rather long time dry, but in the meantime has produced at the base new plants, to which transfers nutrients for their initial growth, that in their turn will bloom after 8-10 years or more depending on the conditions of cultivation. A particular characteristic of the Alcantarea is that of producing new plants at the base even long time before the blooming, similar to tufts of grass, called in jargon “grass pups”.

It easily reproduces by seed, that however does not guarantee to have identical specimens, for instance for the color of the leaves, to the mother plant, by micro propagation and through the new plants that produces at the base that may be detached with caution and rooted. 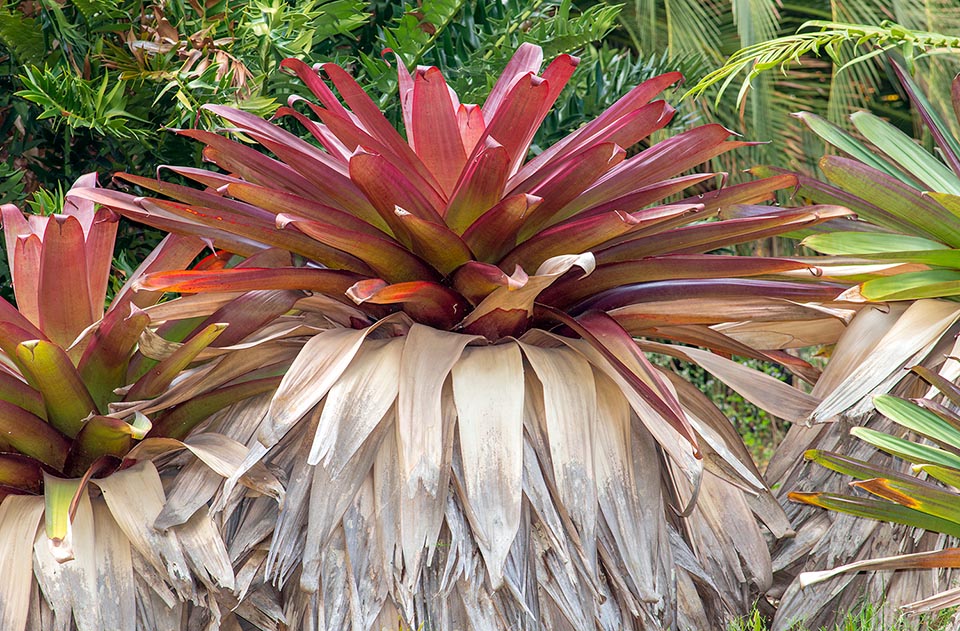 In the central cavity, formed by the rosette of funnel-shaped leaves, may gather even 30 liters of rain water with animal and vegetal debris that decomposing contribute to the nourishing of the plant, playing moreover an important role in the life of several small organisms. Easy cultivation in full sun for a more intense coloration of the leaves © Giuseppe Mazza

One of the most ornamental, elegant and imposing Bromeliaceae, of huge landscape value, amply utilized, as isolated specimen or in group, in the tropical and subtropical gardens, can be employed also in the mildest temperate warm climates where temperatures just under the 0 °C are short lasting exceptions.

It requires preferably an exposition in full sun, for a more intense coloration of the leaves, but adapts also to a slight shade, averagely high temperatures and 65-80 % of humidity. It needs perfectly draining soils, not bearing water stagnations, rich of organic substance, maintained almost constantly humid, and the continuous presence of not calcareous water in the central cavity. It is useful, in spring-summer, the administration of foliar fertilizer balanced with microelements with the modalities shown on the package.

It well adapts to the cultivation in pot, for the decoration of open spaces, where the climate allows so, greenhouses and luminous winter gardens, utilizing capable containers with a substratum having the previously cited characteristics, with lowest winter night temperatures not under the +15 °C. In presence of dry air and high temperatures must be done nebulizations in the morning with non-calcareous water at ambient temperature.