The generic name “Aloysia” has been dedicated by the botanist Palau y Verdera (1734-1793) to Maria Lisa, Princess of Parma (1751-1819), wife of Charles IV, King of Spain. The specific epithet “gratissima” comes from Latin and means “the most pleasant”.

Aloysia gratissima is a very ramified shrub, very aromatic, up to 3 m tall, with quadrangular branches and greyish bark. The leaves on short petioles of 1-3 mm, are opposite, elliptic-lanceolate, about 3 cm long and less than 1 cm broad, but often smaller, usually united in groups along the stems. The upper pagina is rough and opaque green, the lower pagina is provided with rigid bristles, the margin is entire or toothed. The inflorescences are single axillary grapes or axillary panicles that elongate beyond the leaves, two or more per node, occasionally one, 4-8 or more, cm long. The flowers emit an intense vanilla scent and present ovate-elliptic, occasionally linear, bracts. They are small, slightly pedicellate, hermaphrodite, zygomorphous, of white colour, at times bluish. The calyx is formed by short sepals, bristly with four teeth; the corolla, hairy outside, is gamopetalous, shaped like a thin funnel, that opens in 4 lobes. The flowers appear from March to November, especially after the rains, and with their scent do attract many species of butterflies but also the bees, who, from the nectar do produce a delicious honey. The fruit is a schizocarp that divides in 2-4 mericarps. 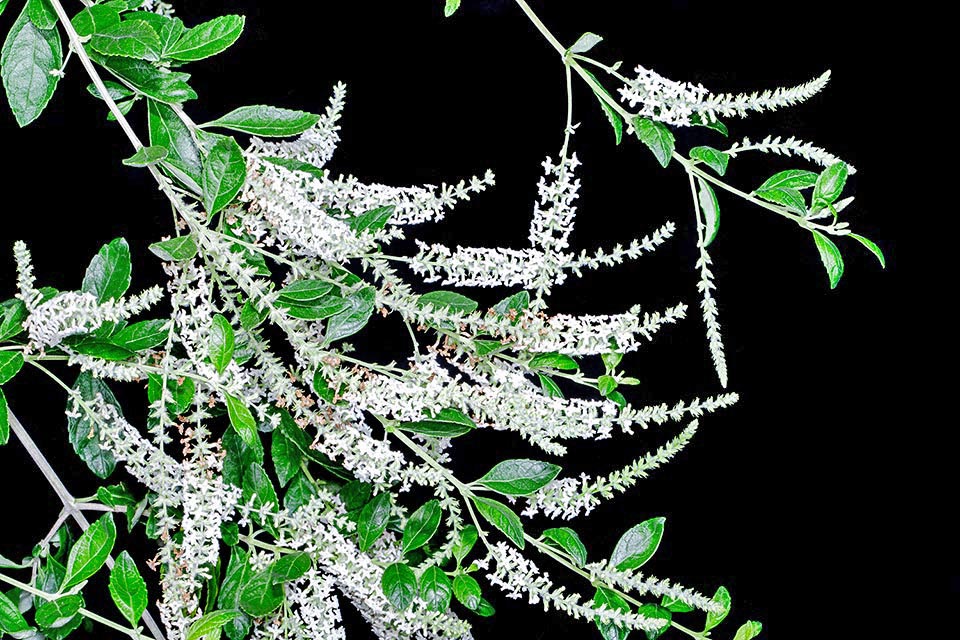 Native to tropical and subtropical America, Aloysia gratissima is a shrub reaching 3 m of height. Easy cultivation, with good resistance to cold and drought © Giuseppe Mazza

Aloysia gratissima, in its origin areas, is found on the rocky slopes of the mountains, on sandy, or clayey, soils up to 1200 m of altitude. It is found, together with pioneer shrubs, at the margins of the thicket, in the abandoned cultivations, along the footpaths and the railway tracks.

In South America, it is used for treating various diseases. The infusion of leaves is utilized as digestive in the stomach pains. The leaves and the branches are effective in bronchial affections, in the lung disorders, and in the antimicrobial action. Thanks to its medicinal properties for the essential oils of which the most important element is the pulegone, nowadays there is an increasing interest for the plant propagation, in order not to decrease further the natural populations, already very reduced, due to the deforestation. The analysis with the High-Performance Liquid Chromatography (HPLC) has evidenced high quantities of ferulic acid, trans-cinnamic acid, and p-Cumaric acid, trans- β-Carotene and Lutein, whose quantity varies during the seasons. Furthermore, the extract is not only antioxydant, but inhibits the lipidic peroxidation that, being reactive, causes damage to the cellular membranes. 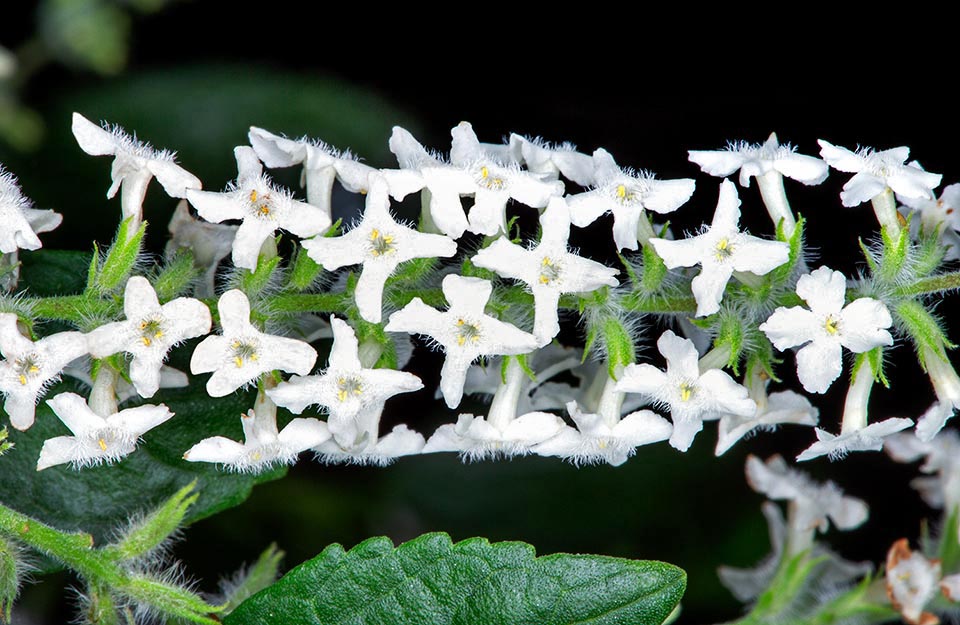 Inflorescences emit vanilla scent and the honey produced by the bees with its nectar is delicious. The plant is toxic for pets, but rich of medicinal virtues © Giuseppe Mazza

Aloysia gratissima, tolerant to drought, withstands low temperatures and can live in different types of soils, better if sunny. Due to its abundant blooming, it is suitable for being utilized in the gardens as ornamental plant but attention is to be paid because it is toxic for the pets. It is easily multiplied by cutting (in autumn-winter) or by seed (in autumn-spring) when the mericarps are dry and of brown colour.