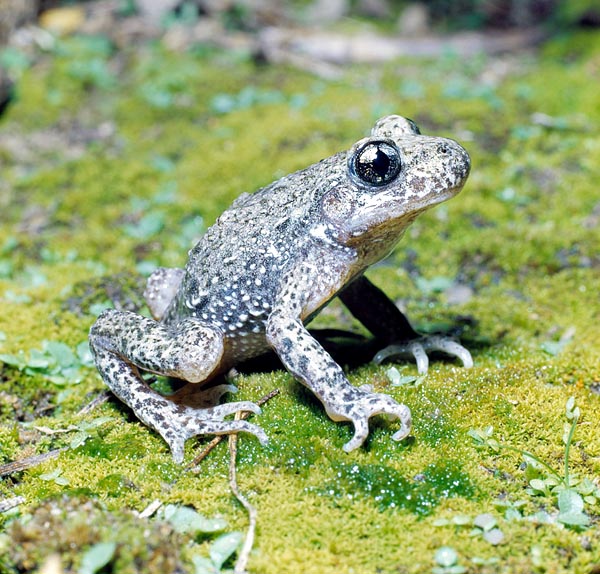 In the reproductive time, the Alytes obstetricans male cares the eggs © Giuseppe Mazza

The Obstetrical toad, also known as Common midwife toad (Alytes obstetricans Laurenti, 1768), is an amphibian afferent to the order of the Anurans (Anura), family of the Discoglossids (Discoglossidae), the anurans with disc-shaped tongue, genus Alytes.  This anuran, which has a similar species in the Iberian midwife toad (Alytes cisternasii), is a particular amphibian, especially for what its biological circle is concerned, because it’s the male who cares the fecundated eggs laid by the female; the common name of obstetrical toad, come rightly from this particularity in the reproductive cycle. The IUCN declares, for this amphibian, a status as “locally common” species.

It is present in the whole Western Europe, from south to north. It is found from the sea level up to the 2.500 me of altitude, as observed in the French and Spanish Pyrenees.

The obstetrical toad is a species with a mainly nocturnal activity and has totally terrestrial habits. It mostly frequents woods, gardens, troughs, drywalls, quarries, sand dunes and rock landslides. It nourishes of larvae of insects and of adult insects, as well as of small molluscs and terrestrial worms.

It’s a small and chubby species, with a length going from the 3 to 5 cm; the forelegs are strong, good for digging. The eyes are very prominent with vertical pupils. The livery, in both sexes, can be green, ash grey or brown, often with darker decorations. There is absence of sexual dimorphism.

During the mating, the male calls the female from a den, for instance a crevice, producing a characteristic acute call “poo…poo”. At this stage, the female, induced to the ovulation, emits a long string of eggs, which she will put on the back, the male fecundates them with the sperm, and then they will be transferred from the female to the male, who places them in jelly cords, wrapped around its hind legs.

The male carries the eggs till when the time of hatching will come: by then, it will release them in low waters, for instance those of a pond or a puddle of water, where the tadpoles will be able to develop freely. This particular form of father’s parental care is essentially an active form of defence of the progeny.