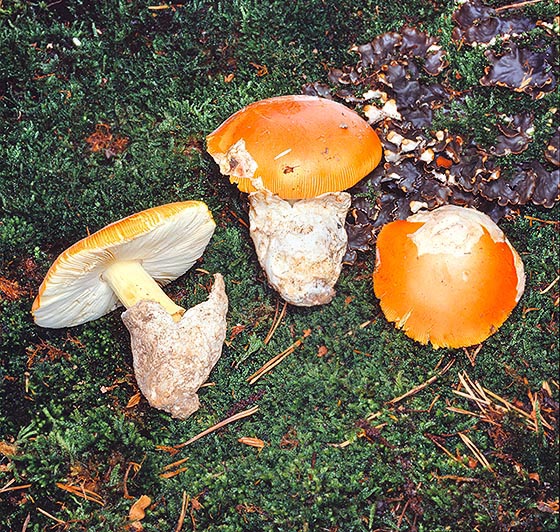 The name of the species, caesarea, comes from the Latin “Cæsáreus” = of Caesar, Roman emperor; of the Caesars.

Description of the subgenus, Subsection and Section 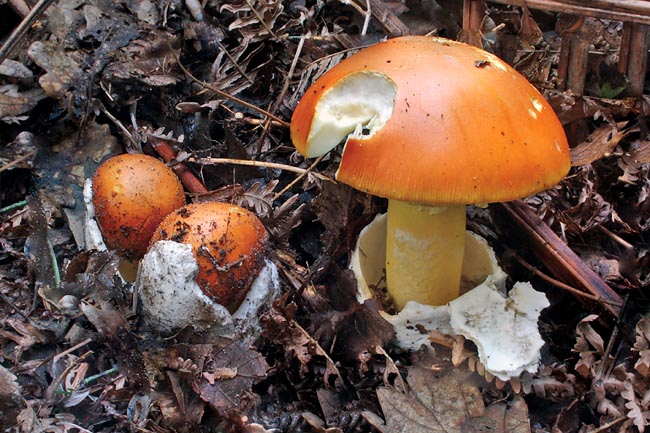 Stem: 8-15 x 2-3 cm, cylindroid, slender, often short, and at times attenuated on the top, with enlarged base but not bulbous, taproot-like, full then filled; more or less smooth surface, of the same colour as the gills.

Habitat: it is a thermophilic species, of the Mediterranean zones with siliceous-calcareous soils, it mainly grows in late summer under latifoliate trees (preferably, chestnut and oak), in warm and dry locations.

Edibility: choice edible, much sought for, commercialized, it is by sure one of the few fungi which may be consumed raw, known since the old times, by Greeks as well as by Romans.

Reactions: phenol on the flesh of the stem: before pink, then dark violet or brownish.

Remarks: it is a much sought for fungus and much appreciated since the old times; by the ancient Romans it was considered as the food of the gods, reserved for the Caesars (from which, the name “caesarea”). Fairly common in the Mediterranean zones, on Italy is also amply commercialized and comes to the Italian markets in particular from the Iberian Peninsula. 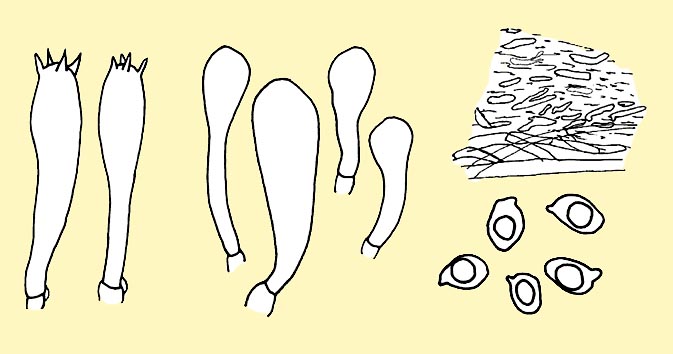 It is one of the few fungi species which may be consumed raw, as there is no knowledge of cases of intoxication due to the ingestion of this mushroom, either raw or cooked. It goes without saying that only young specimens and in perfect status of conservation must be selected. On the other hand, the old and badly conserved specimens emit an unpleasant smell starting from the volva.

Morphologically, it is unmistakable, if all its peculiar characters are present at the same time, i.e.: the more or less strong orange cap; the uniform egg yellow colour of the gills, of the ring and of the stem, the typical striation at the margin of the cap, the colour of the flesh, yellow in the outer part, whitish inside, the membranous volva, saclike, white. However, in very rainy periods, the Amanita muscaria (L. ex Fr.) Hooker, which has more or less red cap, and white gills, sac and ring, may get more or less similar hues, due to the washout of the cuticle pigments, but it will never have the robust and membranous volva typical of A. caesarea as that of A. muscaria is dissociated in scales or warts, practically inexistent in very rain weather.

The Russula aurea Persoon, due to the colourof the cap and of the gills may be mistaken with the Amanita caesarea, but has no volva and ring.