The name comes from the Latin “spissum” = thick, stout, due to the robust, solid appearance of the mushroom.

The Section Validae is characterized by basidiomata with a hyphal structure mostly sphaerocystic, crumbly, so that the general or universal veil protecting them during the first stage of growth (primary), when breaking, remains completely on the surface of the cap, in the form of small, powdery patches, which can easily disappear. The volva, almost absent, shows some small beads, adherent to the bulb (napiform-rooting volva). Non-striated cap margin. In this Section are found Amanitas with persistently white flesh and others with more or less reddening flesh, most of them are edible, after cooking, as they contain thermolabile toxic substances, between which the hemolysins, which are eliminated with the temperatures of 70-80 °C.

Stipe: 1-3 x 6-13 cm, generally robust, slender, cylindrical, fleshy, attenuated at the apex and enlarged at the base in a bulb from sub spherical-ovoidal to napiform, with concolorous pruine and white over the ring. Ring ample and membranous, persistent, white, slightly striated. Crumbly volva, dissociated in small floccose scales, white. 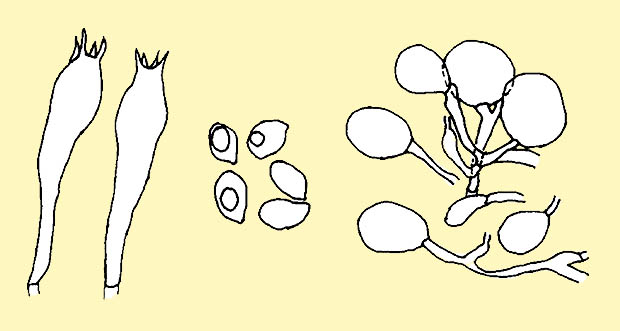 Habitat: Grows by the end of summer-autumn, both in latifolious woods (oaks and chestnut trees), and in conifer ones (spruces, pines).

Notes: this species is easily recognizable due to its appearance rather robust, stumpy, the cap of prevailing greyish colour, with white or greyish warts and non-striated margin, by a base with napiform volva, persistently white flesh, ample ring, membranous, white.

Varieties of the species:

Amanita spissa for. alba (Gilbert) Gilbert, identical to the type, but completely white.

Remarks : by some authors, it is morphologically considered as a collective species together with the var. excelsa, cariosa, valida, forms mostly due to different ambient conditions, grouped in a unique species: Amanita ampla of Persoon.

It might be mistaken, mainly, with Amanita pantherina, toxic, which distinguishes for the following characters: grey colour of the cap and not brown, non-striated margin, napiform rooting volva, different from the circumcised circinate volva of Amanita pantherina.