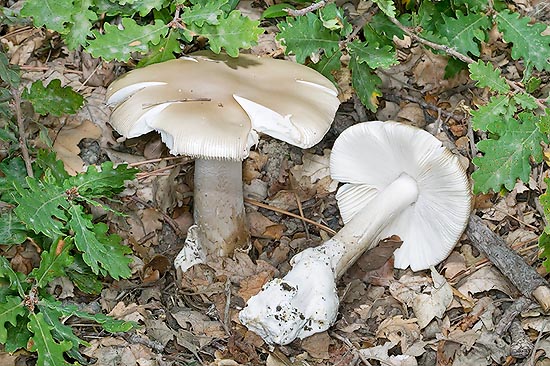 The name comes from the Latin lividus and pallescens: which becomes livid and pale; due to the colour of the cap.

The Section Vaginatae (ex Amanitopsis = Amanitas without ring), is characterized by basidiomata with prevailing filamentous hyphal structure, composed by extended cells, so that the general or universal veil which protects them during the first growth stage (primary), while tearing, persists almost integrally at the base of the stem, with the form of a volva, defined as sac-shaped, more or less wrapping, leaving on the surface of the cap some patches of variable size. They show the margin of the cap clearly “combed”, and absence of partial veil, since it forms only at embryonic level, to dissolve, later on, in thin flakes or stripes which decorate the stipe. We find Amanitas all edible after cooking, as they contain toxic but thermolabile substances (hemolysins), which dissolve with temperatures of 70-80 °C.

Cap: 8-15 cm, from hemispheric to convex to flat, finally flattened-depressed, briefly striped, of much variable, but always very pale, colouring: from white to cream-white, livid-grey, grey-cream, with stronger tones at the centre, with rare shreds or veiling patches of white colour.

Stipe: 9-15 x 1,5-3 cm, stout, cylindrical, slender, fistulous, attenuated at the apex and enlarged at the base, of white colour, then covered by concolorous flocks, or scaly concolorous stripes to the cap. Ring absent.

Sac volvaceous, ample and membranous, sheathing at the base with the upper part free, but soon frail, white, at times shaded of pale ochre.

Notes: not very common spe- cies, but easily recognizable for its colouring generally always clear, for a volva soon frail and a stem with concolorous flocks, which distinguish it from the A. vaginata .

Amanita fraudolenta Contu = Amanita lividopallescens var. tigrina (Romagn. ex Bon) should have brown-striped stem and the edge of the lamellae dotted of the same colour.

Remarks: The distinction with Amanita beckeri and Amanita malleta is difficult, as they show very similar appearance, stoutness and pileus pigmentation. An element of distinction might be represented by the volva, which in Amanita lividopallescens, shows usually as more sac-like, in comparison with the one of the other two Amanitas, in which, on the contrary, it is frailer, but only the microscopic analysis might cancel any doubt.