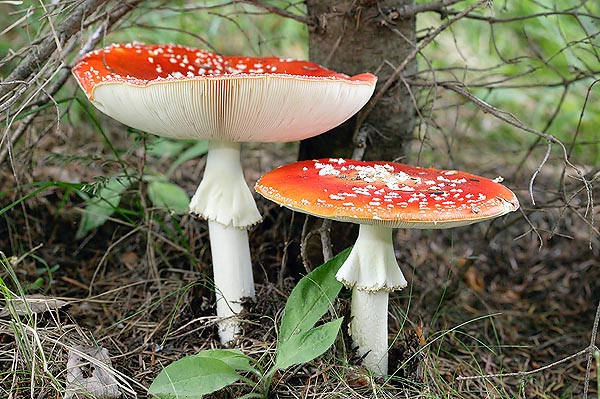 The origin of the name, from the Latin muscarius = relating to flies, dates back from the thirteenth century, when this mushroom was utilized for attracting the flies; this thanks to one of its toxic substances, and precisely, the ibotenic acid, an insecticide which attracts and seizes the flies: hence, the name of “muscaria”.

This basiodoma is part of the Genus Amanita, one of the most “phylogenetically” evolved of the order Agaricales (gills basidiomata). As a matter of fact, the way of development of this Genus foresees a first growth stage (primary), which presents with the shape of an egg, protected by a general, or universal, veil, which tears up, allowing the sporophore to emerge, and leaving (depending on the hyphal structure), some residues, both on the cap (warts or patches), and at the base of the stem, with the form of a volva. A second veil, called partial veil, not always present, protects the hymenophore, and, consequently, the fertile part of the mushroom (hymenium), where the spores develop; the remains of the partial veil fall down on the stem, shaped like a ring.

The Amanita muscaria shows a type of volva called dissociated and a crumbly floccose ring, due to the composition of the hyphae, called sphaerocysts, that is, composed of globular, sub-globular, or rounded cells, characters which place this mushroom in the Subgenus Amanitaria.

Basidiome of medium or large size. The pileus, robust and fleshy, can reach even 18 cm, or more.

Cap: from globose to hemispheric, convex or even, sometimes with a central depression, with a briefly striped margin, bright red scarlet colouring at times, more orange, covered by frail warts, more or less sharp, pyramidal, of white colour.

Hymenophore: thick gills, broad and free to the stipe, intercalated by white truncated small ones, at times with yellowish gradations, sharp and flaky. Sporeprint white.

Stipe: generally stout, slender, cylindrical, fistulous, enlarged at the base in a sub spherical-ovoidal bulb, pruinose white at the apex and flocky elsewhere. Ring, residue of the partial veil, wide and membranous, persistent, white, striped with flaky margin, yellowish at times. Volva, residual of the universal veil, dissociated in beads or small scaly plaques, flocky and white. 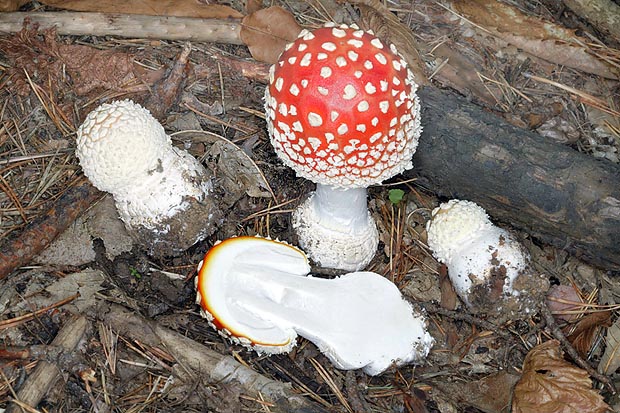 Flesh: thick, consistent, persistently white, orange yellow under the cuticle, mainly in the central zone of the cap. Not particular, but not unpleasant, smell and taste.

Habitat: ubiquitous in summer-autumn, both in woods of latifolious trees (mainly, beeches, oaks, birches), and in the conifer ones (spruces, pines), where it’s more frequent and often growing together with Boletus edulis (in dialect “segnabrise” = “cep marker”). We find it both in the Alpine and Mediterranean areas.

Notes: Very nice-looking mushroom, already known and consumed in the most ancient times, for its hallucinogenic properties, we often find it in the tales for the kids; mushroom improperly called “noxious”, it is not, actually, such a dangerous mushroom, as its toxicity is fairly mild indeed (but, in any case, toxic).

In some areas of the world, it is eaten after particular treatments, however, we must keep in mind that the quantity of toxins contained in a mushroom can vary from different collections, and in relation with the soil, the growing place, the climatic factors, etc. This explains why in some parts of the world it is consumed for voluptuary purposes, without causing remarkable damages, as shamanic intoxicating agent in the Siberian tribes. Its hallucinogenic effect has justified the divinatory utilizations, along with the mushrooms of the Genus Psylocibe, by some populations (Aztecs), and voluptuary in the populations of warriors, but the fact remains, however, that it is a toxic mushroom, and therefore its utilization is not advisable.

Amanita muscaria var. regalis (Fries) R.Maire 1913 = Amanita regalis (Fries: Fries) Michel, smaller in size than the Amanita muscaria, with reddish brown shade of the cap, with general yellowish-grey veil, as the gills when ripe, it grows close to beeches and conifers (Picea, Pinus).

Amanita muscaria var. aureola Boudier, is a mountain woods variety (Picea abies, Pinus) and distinguishes itself for the presence of a cap without warts, with shades of orange, orange yellow, and a volva not much adherent to the bulb, almost circumcised and floccose.

Remarks: not to mistake with the Amanita caesarea (Scopoli : Fries) Persoon, choice edible, which distinguishes for the orange cap without warts, for the yellow partial veil, yellow gills, yellow stem, white sack-shaped volva.