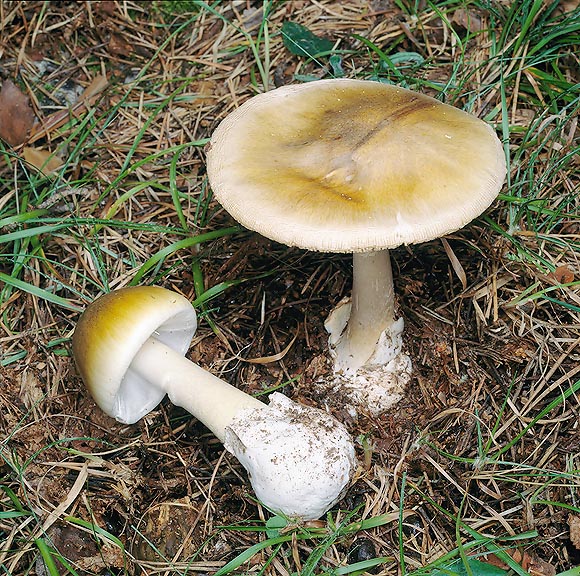 Toxic-deadly, long latency, from 6 to 24 hours and more after eaten © Giuseppe Mazza

The name of Greek and Latin origin, is composed by the Latin Phallus = phallus, or the Greek faloo = I germinate, grow, swell; and from eîdos = shape, aspect; it comes from the form of a phallus; which the mushroom has when young.

The section Phalloideae is characterized by basidiomata with a filamentous hyphal structure, composed by extended cells, so that the general or universal veil, which protects them during the first growth stage (primary), is torn off in a rather limited surface; however, the remaining part persists at the base of the stem, with the form of a volva, defined as sac-like, or sack-shaped, leaving then surface of the cap without ornamentations (glabrous). Other characters are: the non striated margin of the cap and the base of the stem clearly bulbous. Three species plus a variety of the typus, all deadly poisonous: Amanita phalloides (Vaill.Ex Fries) Link; Amanita phalloides var. alba (Vittadini) Vesley; Amanita verna (Bull.:Fr.) Lamarck; Amanita virosa (Lamarck) Bertillon, all belong to this Section.

Basidiome of medium or large size, its cap, stout and fleshy, can reach even the 18 cm, or more.

Cap: from globose to hemispheric, convex or flat, with smooth margin, quite variable colouring, yellowish, yellow, green-yellow, brown-green, brown-yellow, with darker innate radial fibrillae, which start from the centre and branch out towards the margin, which has no annex ornamentations (glabrous).

Stipe: generally stout, slender, cylindrical, fistulous, attenuated at the apex and enlarged at the base, in a sub spherical-ovoidal bulb, of white colour, showing, at times, greenish-grey stripes. Ring, wide and membranous, persistent, white, lightly striped. Sac volvaceous, white, ample and membranous, adherent to the bulb, with the upper part free.

Habitat: ubiquitous in summer-autumn, mainly in woods of latifolious trees (oaks, hazels, hornbeams and chestnut trees), but it can be found also under the beeches. It prefers thermophile areas, and the Mediterranean climate.

Edibility: deadly-poisonous. Phalloidinic amatoxinic syndrome, with long latency – from 6 to 24 hours, and more, after the meal.

Note: very handsome mushroom, which is unluckily often responsible of the most serious poisonings which occur in our country, it is known also with the dialectal name of “death cap amanita”.

It is worth spending a few more words on this species, to evidence the characters distinguishing it: white bag-shaped volva, glabrous yellowish-green cap, with innate fibrillae with a smooth margin, free white gills, white bulbous stem, with greyish stripes, ring white.

Remarks: During the first stage of growth (primary), when egg-shaped, it may be mistaken with other edible, or not, Amanitas, white Agaricus (with the Amanita phalloides var. alba), Volvariellas, with the Russula virescens (choice edible), and the Russula heterophylla (good edible). The latter, however, belong structurally and morphologically to other genera. When the Amanita phalloides is collected without the volva, the novices may mistake it with Tricholoma sejunctum. The latter, however not edible because a bitter taste, shows an identical cap for colour as well as for innate fibrillae, to the Amanita phalloides. It belongs however to another genus: Tricholoma.