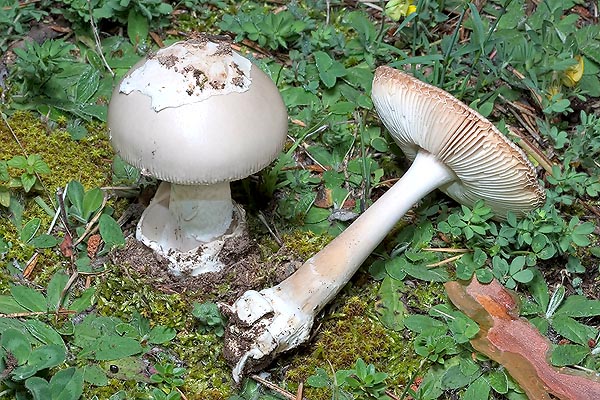 The name vaginata comes from the Latin “vaginatus” = protected by a sheath, due to the type of sheathing volva.

The Section Vaginatae (ex Amanitopsis = amanitas without ring), is characterized by basidiomata with prevailingly filamentous hyphal structure, composed by extended cells, so that the general or universal veil which protects them during the first growth stage (primary), while tearing, persists almost integrally at the base of the stem, with the form of a volva defined as sac-shaped, more or less wrapping, leaving on the surface of the cap some patches of variable size. They show the margin of the cap clearly striated , “combed”, and absence of partial veil, since it forms only at embryonic stage, to dissolve, later on, in thin flakes or stripes, which decorate the stipe. We find amanitas all edible after cooking, as they contain toxic, but thermolabile, substances (the hemolysins), which dissolve with temperatures of 70-80 °C.

Cap: of average size, from 6-10 cm, not much fleshy, frail, initially campanulate, then flattened, with central umbo surrounded by a light depression, with margin clearly striated, ash-grey colouring, with remains or white patches, more or less great. 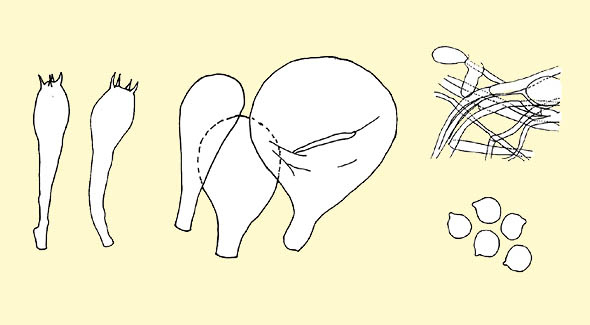 Habitat: ubiquitous, spring, summer and early autumn, both in latifolious woods and in the conifers ones. Rather common species.

Notes: easily identified species due to the colour of the grey cap, with clearly striated margin, stem without decorations, generally white veil.

Varieties of the species, based on the colour of the cap:

Amanita vaginata for. avellanea Traverso, has the cap of nut-brown beige colour.

Amanita vaginata var. cinerea (De Seynes) Gillet, has the stipe and the gills of a grey colour.

Remarks: the stripes on the cap, the absence of ring, and the stem never bulbous, are the main characteristics which differentiate it from the deadly amanitas: Amanita phalloides, Amanita virosa, Amanita verna.