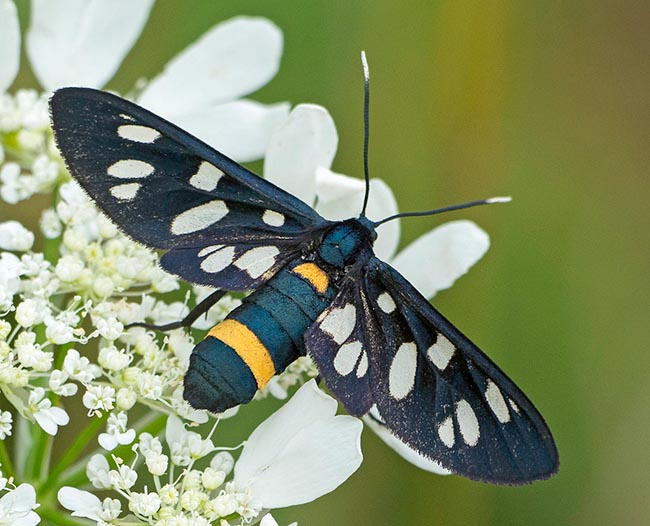 Amata phegea is a typical Müllerian mimicry example. Already inedible, though belonging to another lepidopterans family, is similar to the Zygaena ephialtes, rich of toxins, to increase the dissuasive effect © Gianfranco Colombo

The Nine-spotted moth (Amata phegea Linnaeus 1758), called also in many Italian regions Pretino (young priest) and in southern Italy ‘U carabinieri, is a moth with a purely diurnal flight.

Traditionally placed in the family of the Arctiidae during the last years and with the advent of the DNA studies, the great family of the Nottuidi has been divided in other and more numerous families, among which that of the Erebidae.

The species once located in the Arctiidae and Lymantridae are now included in this new enlarged family which will become by far, once concluded the operations of sorting that already sees more than 25.000 species assigned, the most numerous in the world of the lepidopterans.

It must also be clarified that this moth is often classified in the genus Syntomis, a denomination usually utilized as synonym of the genus Amata.

We have wanted to follow the old classification so long as they will not reach an overall definition of this issue, whilst taking into account those who are the new systematic of assignment of these species. The Amata phegea is therefore a heteroceran lepidopteran of the great family of the Arctiidae.

In the summer season, especially in the temperate valleys, it is sighted while flying in huge numbers and on very vast areas as it is a butterfly with very few foes and who has been able to take advantage in the evolution of its toxicity, associating for similarity with the Zygaena ephialtes also inedible. This is an evident demonstration of the Müllerian mimicry. Two species so much genetically distant, both toxic or inedible, imitate each other sharing the same aposematic colouration, sending a unique and stronger warning message to the potential aggressors. The Amata phegea an Arctidae and the Zygaena ephialtes a Zygenidae are one of the most evident expression of this mimicry.

The two species, indistinguishable on the field at first glance, can be distinguished only after an accurate inspection. Particular characteristics of the nine-spotted moth differing it from the Zygaena ephialtes, are the very thin and elongated antennae with white apex, two yellow cingula, one abdominal and the other thoracic and the absolute absence of colour on the fore wings. 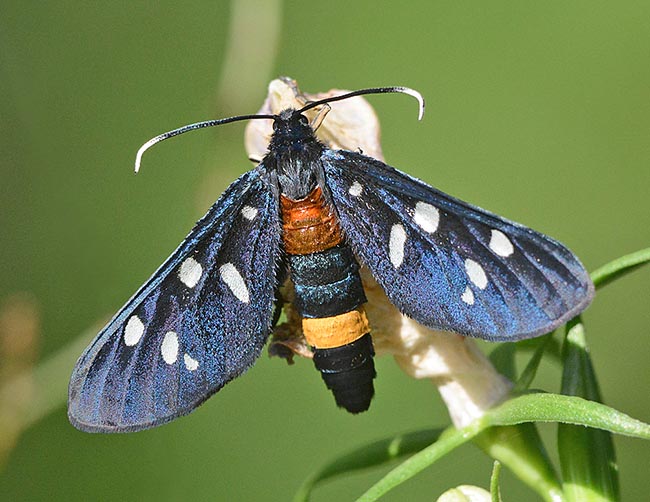 The etymology of the scientific name is well defined. The name of the genus Amata comes from the Latin “amatus” = loved, well liked, whilst the species’ one phegea from Phegea, daughter of Phegeus, king of Psophis, in Arcadia. With regard to Syntomis, the genus where often this butterfly was placed, this comes from the Greek “suntomus” = shortened, cut out, with reference to the quite reduced dimensions of the rear wings. In Europe, it is commonly called Weissfleck Widderchen in German; Sphinx du pissenlit in French; Phegeavlinder in Dutch and Nine-spotted moth in English.

The nine-spotted moth is much diffused in the palearctic area with a greater presence in the southern part of its range. It is almost absent in the northernmost regions where, in any case, remain great colonies. It is present in central-northern Europe and, eastwards, through the Balkan Peninsula, it reaches Anatolia up to Caucasus.

It loves the warm and dry climates but is also and quite often found in humid and cool woods. It flies during the warmest hours of the day but in the period of maximal diffusion can be met active also under a light rain and with much accentuated relative humidity gradients. It is typical of our meadows, usually in the open areas and surrounded by broad-leaved and rich of inflorescences trees where often they gather in huge number. It is an invasive species during the central period of eclosion with very numerous presences. It prefers low altitudes but it may be easily seen on the mountain slopes facing the sun, up to 2000 metres. Its flight is hovered but slow and does not love covering long distances. It flies usually and continuously from flower to flower and often keeps staying for long time sucking the nectar.

The nine-spotted moth has a wingspan of about 4 cm and a fairly uniform colouration. The narrow and elongated wings are typical of the zygaenids to which they morphologically resemble and with fore wings much more developed than the rear ones that result proportionally being about the half. 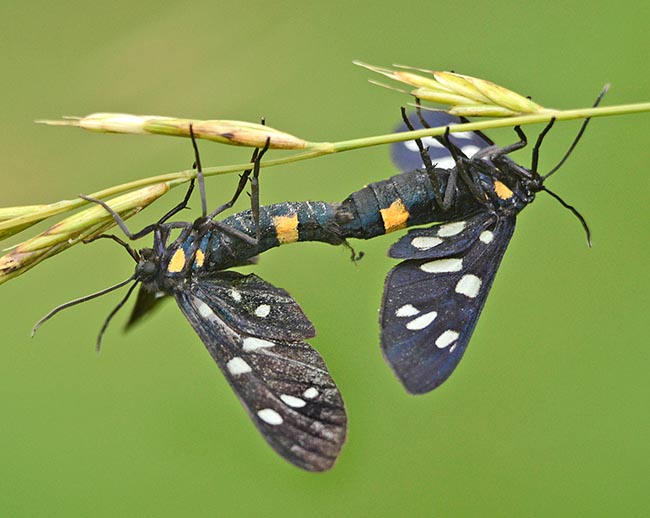 The basal colour is black on both wings with slight bluish metallic reflections especially for the fresh specimens, dotted with clear and well visible white polka dots. After a few days the black colour loses its consistency and the bluish reflection disappears leaving room for a dark greyish brown. The thorax and the abdomen are black, both crossed by well visible yellow cingula. The abdomen is robust and rather elongated; it is often supported and dragged on the flower while feeding. When staying, it keeps the wings completely outstretched. The antennae, placed on a well robust head, are filiform and much elongated and have the last third of the length of white colour. Like the similar zygenids, when squeezed between the fingers it emits a pleasant and penetrating smell of musk.

Some subspecies have been classified rightly in function of the presence and of the size of the dotting on the wings: the iphimedia completely black without any white dot on both wings and the kruegeri with more accentuated and bigger dotting.

The nine-spotted moth is a monovoltine species (it reproduces only once a year). It flies from May to the whole September to originate in the late summer a new generation of caterpillars who will spend the winter. It lays the eggs on substrata close to the food plants, usually annual, therefore the winter is spent close to the place where then with grow up again the host plants.

The caterpillar has the body totally covered by a woolly dark brown down, marked by transversal bands of slightly paler colour which make it seem ringed. It is easily visible during the months of May and June when, reached the maturity, is often found crossing, at somewhat strong speed, country lanes and paved roads looking for a place where to pupate. Once mature, the caterpillars are about 4 cm long. The chrysalis is fixed to the ground and is formed by vegetal debris. The eclosion occurs after about three weeks. The host plants belong to the genera Plantago, Rumex, Taraxacum, Galium and, rarely, also Rubus.