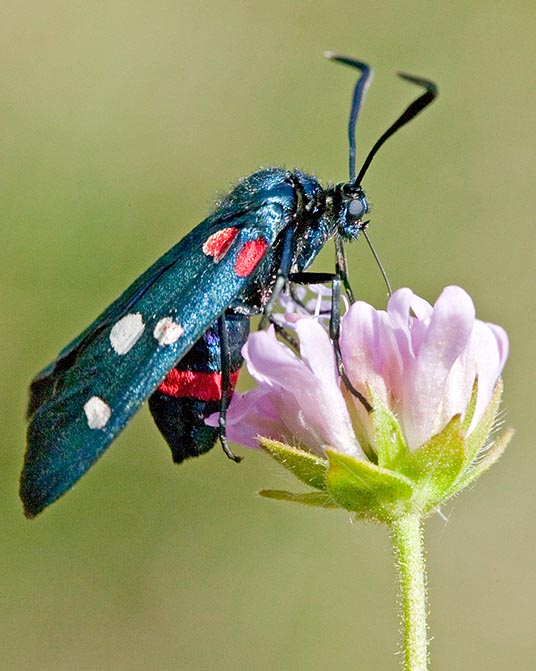 The Zygaena ephialtes Linnaeus, 1767, belongs to the order of the Lepidoptera and to the family of the Zygaenidae, a group which includes these particular moths (Heterocera) with the diurnal flight.

In this family (please see Zygaena carniolica) are included about 800 species distributed in different continents in particular where their ideal habitat is present: a sunny climate, often very arid and with high temperatures.

For the etymology of the scientific name of the Zygaena please refer to Zygaena carniolica.

The Greek term “ephialtes” has a fairly strange meaning and difficult to match with a butterfly if not through particular interpretations.

It comes from the Greek term “ephallomai” = to leap over, to oppress, and is literally referred to the oppression we get from a nocturnal nightmare during the sleep, with the feeling of heaviness, of anxiety and suffocation. With some imagination we might affirm that the difficulty met in determining this species can have induced the classifier to use such a gloomy term.

The Zygaena ephialtes is widely much diffused in Central Europe, from France up to the Urals and, at times, beyond; from the Balkans to the coasts of the Baltic Sea excluding the Scandinavian area, Great Britain and Ireland. Northern coasts of the Mediterranean up to Caucasus and Asia Minor.

In Italy is amply diffused excluding the extreme south, Sicily and Sardinia, limiting its presence to the only inner hilly areas. In Liguria, they live also close to the coast. It is often absent from the Alps whilst is much diffused on the Appennine Mountains tending to decrease and then disappearing going southwards.

It prefers moderately warm zones, with good sun exposure and grassy, choosing preferably calcareous soils and often loves, more than any other species of zygaena, the proximity of woods and of shrubby areas. In the Mediterranean area is diffused at altitudes over the 3/400 metres up to 1000/2000. 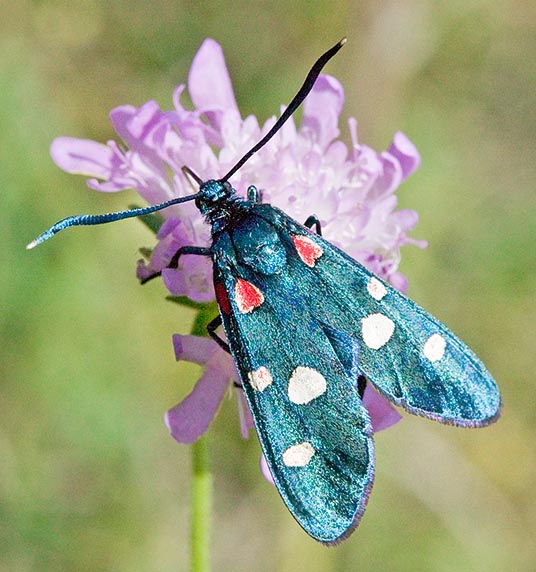 The ephialtes is by far the most polymorphic species among all zygaenae, as it shows a remarkable variety n the colours and in the drawings on the wings. However, it is a species very easy to recognize even if so much variable.

Seen when flying, it is totally black and only when resting the characteristics distinguishing it can be noted.

The forewings are bluish black with five or six red or yellow spots, at times even white, assigned alternatively to the ephialtoid or the peucedanoid group.

In all Zygaena ephialtes the 1 and 2 spots may be yellow or red but never white and are elongated and parallel. The others, at times the 6 is slightly marked or missing, may be yellow, red (in the peucedanoid group) or white (in the ephialtoid group). The rear wings are usually black with small whitish spots (in the ephialtoid) or amply red yellow with vast black border (in the peucedanoid group).

All forms of Zygaena ephialtes carry the abdominal girdle which may be either red or yellow. This zygaena has a particular affinity of mimetism with Amata phegea, an Arctiidae of diurnal flight very common in the Mediterranean area.

Though being both either disgusting or toxic for their predators, they have developed a Müllerian mimicry so much accentuated to render to the non-experts difficult to distinguish them on the field.

Two species so distant genetically, imitating each other, have sent to the common predators one unique and stronger warning thus advantaging them reciprocally in the defence. This convergent evolution has led them to frequent the same habitats as well as to have the same alimentary habits.

Rear wings are black with whitish spots or amply red yellow with black border. The abdominal girdle may be red or yellow © Giuseppe Mazza and Gianfranco Colombo

Essential characteristics for distinguishing the Amata phegea from the Zygaena ephialtes, are the absolute absence of colour in the drawings on the wings (in the phegea only white or even absent in the form iphimeida), two yellow girdles, abdominal and thoracic (only one, abdominal, in the ephialtes), filiform antennae not clavate and with white apex (in the phegea) and rear wings with white spots (in the phegea). 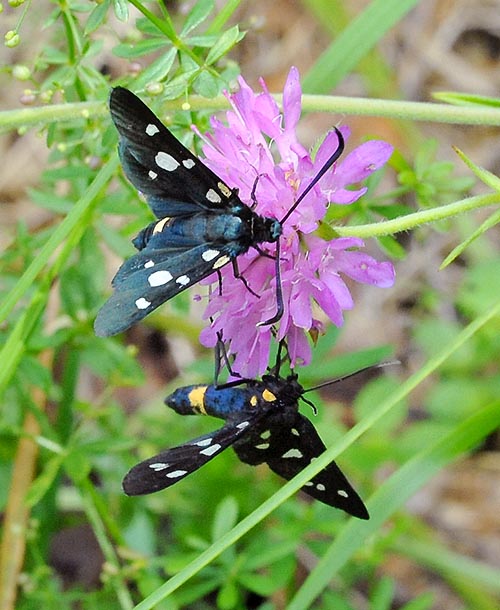 The Zygaena ephialtes has an average wingspan of 4/4,5 cm and there is no dimorphism between the sexes but a slight difference in the size in favour of the female, however not detectable on the field. The female has often bigger body than the male.

It has robust, filiform and well clavate antennae of black colour and pointed.

There is a remarkable number of subspecies often referred and nominated depending on the characteristics of the drawings and of the colours carried on the wings, but all belonging to the aforementioned groups amply acquired in the scientific literature.

The Zygaena ephialtes has the period of flying away in late summer, with concentration in July and August. It has as host plants the Coronilla, Thymus, Hippocrepis, Plantago, where the caterpillar may spend even more winters, hibernating at the larval stage and completing the growth during the following year.

The larva is greenish with ochre shades, crossed by a blackish line on the back and dots laterally with blackish spots. Little and very fine whitish down merged in small tufts. The cocoon is elongated and spindle-shaped, of yellowish white colour and of papery and elastic consistence, tied to grassy stems.

Like all zygenae the adult of Zygaena ephialtes eats and gathers with assiduity on the flowers of Scabiosa, of Knautia, of Cirsium, but with e marked preference also for the elderberry.