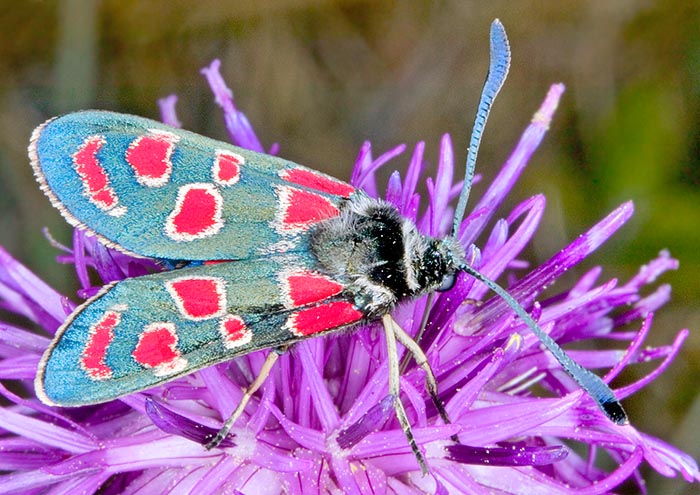 Full of poison, Zygaena carniolica is common in Europe and Central Asia up to Siberia © Giuseppe Mazza

The Zygaena carniolica belongs to the vast order of the Lepidoptera and to the family of the Zygaenidae, which includes this particular group of moths (Heterocera) with the purely diurnal flight.

In this family are included about 800 species scattered in all continents especially where are present the ideal conditions for their survival which requires sunny climates, often very arid and high temperatures.

The zygaenas are particularly diffused n Europe and are present up to very high latitudes. Similarly, in mountain zones where in presence of areas with good sun exposure, they have settled up to 2.000 m of altitude.

They are by far the most observed and studied butterflies in the world of the lepidopterans. The lively colours, the numerous and constant presence during the summer months, the slow flight and movements, the facility in finding them on their preferred flowers, the availability to get closer without fear, have rendered them object of curiosity and study since long time. The literature is very considerable and practically impossible to enumerate and is such to continuously assist to innovations, to modifications and reclassifications of genera, species and subspecies that on a daily basis are presented by entomologists and aficionados of the whole world.

The etymology of the scientific name of the Zygaena carniolica comes from a reclassification done by Fabricius in 1775 of a group (Sesia) previously assigned to this family by his teacher Linnaeus and was referred to the Greek term “zugaina”, the hammerhead shark, maybe identifying in it a strange resemblance with the head of the zygaena. This definition was then reinterpreted by Macleod who derived it from “zugon” = yoke. The etymology of the new genus Agrumenia seems to derive from the Latin “agri moenia” = inside the field, perhaps for identifying the ambient where this lepidopteran habitually lves.

The term carniolica refers simply to the geographic area where this species was more easily found, that is the Carniola, a small and historical region of the Austrian-Hungarian Empire, now almost totally belonging to Slovenia but which still includes part of the Austrian territory and of the Italian one (Tarvisian area).

The Zygaena carniolica is very much diffused in Europe, in the Mediterranean area and in an ample belt that, parallel to our latitudes, reaches, through Anatolia, northern ran and the steppes of Central Asia, up to Baikal Lake in Siberia. It lives preferably in w arm, well exposed to the sun, areas, arid and grassy, usually subject to long periods of drought or even if rainy, on well drained soils without stagnations or situations of strong humidity. It lives in open areas disdaining the thickly wooded areas. 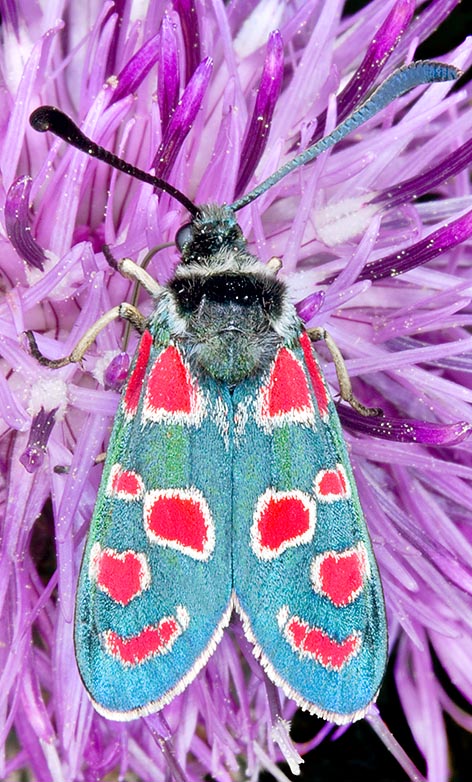 The unmistakable colour is a warning to predators © Giuseppe Mazza

Zygaenas are small diurnal moths with clavate antennas, with relatively narrow and elongated wings and a quite well pronounced abdomen. They are usually red with much lively colours that, besides rendering them well visible, serve as a warning to their predators.

Their body, in fact, contains repellent chemical substances which render them inedible, disgusting and toxic to any of their foes. As a matter of fact it is understandable that the absence of a fast flight, the long stays on the flowers and the laziness of their escape come nothing but from the genetic incolumity nowadays acquired through the improvement of this form of Müllerian mimicry.

This species, like many other zygaenas, shows an impressive variability in the drawings and in the colours, characteristics which have rendered fairly difficult the work of the entomologists in their classification.

Still today they discover new subspecies, often initially placed to the rank of species but which, after long debates and analyses are again carried to the level of ssp. classifying them simply as variations or geographic anomalies.

The front wings are black with six red spots surrounded by a more or less extended white border. The outermost spot has the shape of a well pronounced crescent. The black of the wings has blush reflexes strongly contrasting with the lively red of the spots. The rear wings are totally red on both surfaces and are surrounded by a well defined lower black border.

It has an average wingspan of 4,5 cm and there is dimorphism between the sexes apart a slight difference in the dimensions in favour of the female, however not always detectable on the ground. This species has generally a quite evident red girdle on the abdomen and a second whitish ring on the neck.

It is easily distinguishable on the on the field from any other zygaena, due to the particular drawings of the fore wings but the Zygaena occitanica which is quite similar. In Italy we have ssp. of Zygaena carniolica with particularities such as to lead to presume distinct strains of origin.

In the eastern areas (Friuli-Venezia Giulia – Carniola), on average, they are larger and are almost missing of the red abdominal girdle; in the western Alps (Piedmont-Aosta Valley) this particularity is very rare and also the usual white contour to the red spots of the wings is absent. In Liguria, they are often subject to forms of more or less marked melanism which gradually reappears whole going southwards of the peninsula, where it almost constantly appears the red girdle on the abdomen. Among the many species there is the quite particular Zygaena carniolica f. flaveola, where the red colour is totally replaced by the yellow.

The Zygaena carniolica is, among tall the European zygaenas, the species with the most delayed eclosion. As a matter of fact this appears by the second part of the summer and may delay the flight up to the second half of August in the mountain zones. In the coastal areas we may observe, on the contrary, eclosions even from the month of May.

The hosting plants are usually Lotus, Ononis, Onobrychis, Anthyllis and other leguminous. The larva is pale green with a white line on the back and spins the cocoon after about fifteen/twenty days from the birth. The cocoon is yellowish white of ovoid shape and with elastic consistence. It has an annual cycle but t is thought that it can keep in that stage for two years. The adult nourishes and gathers assiduously on the flowers of Pincushion flowers, Thistles and Sainfoins where it is present in great number.

Of each zygaena do exist tens of synonyms often relegated to the level of ssp. We mention only Sphinx carniolica Scopoli, 1763; Sphinx onobrychis Denis & Schiffermueller,1775.