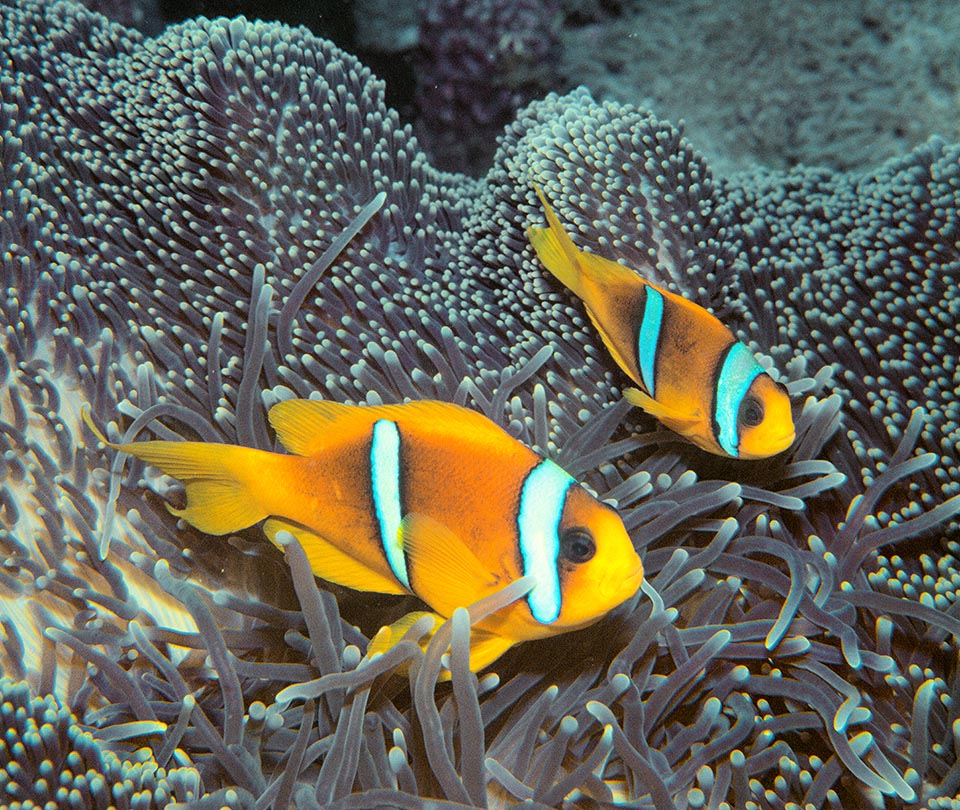 The well known Twoband anemonefish (Amphiprion bicinctus Rüppell, 1830) belongs to the class of Actinopterygii) the ray-finned fishes, to the order of Perciformes, to the family of (Pomacentridae) and to the subfamily of the Amphiprioninae, the clownfishes. 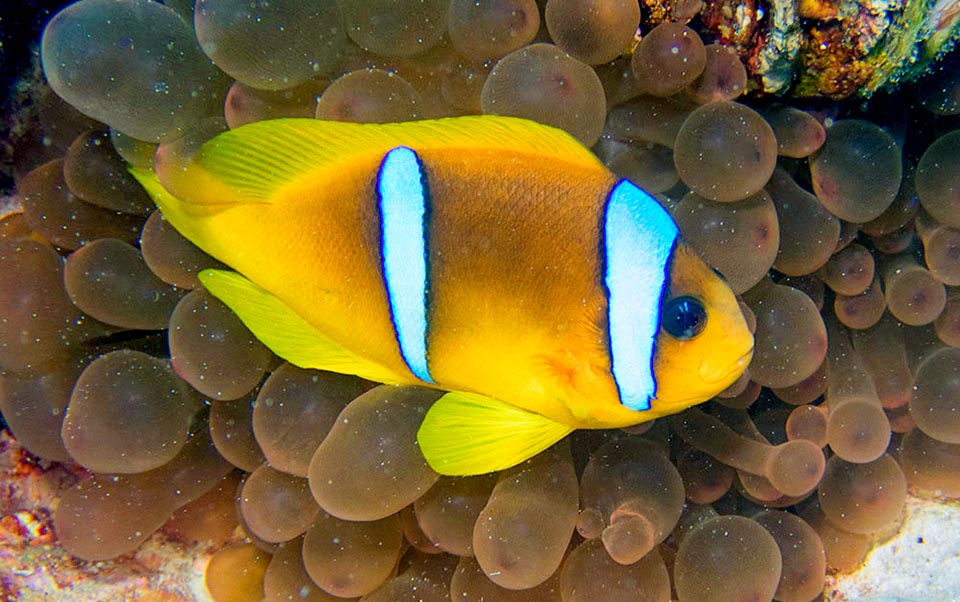 Like all Amphiprion, in case of danger takes shelter among the tentacles of the actinia it has chosen as home and is well accepted by five species © Paddy Ryan

It is at home in the Red Sea and in the tropical waters of the Indian Ocean. Indicatively, we find it in Mozambique, in India, Sri Lanka and at the Chagos Islands. 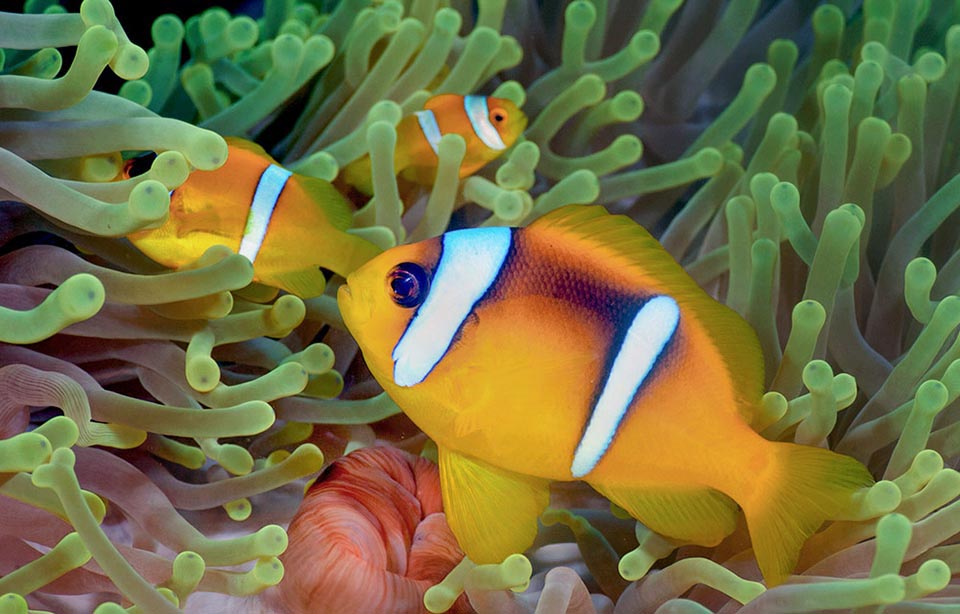 Lives in couples or in small schools with one bigger dominant female and some males. When it dies the biggest of them changes sex and takes its place © Paddy Ryan

In the whole, the livery is yellow-orange with a brown zone at the centre and near to the dark eye, masked also by the close presence of the first vertical white band crossing the body like a saddle breaking the contour of the fish. The second one, in rearmost position, stops on the contrary at the base of the dorsal fin, where the spiny rays stop. 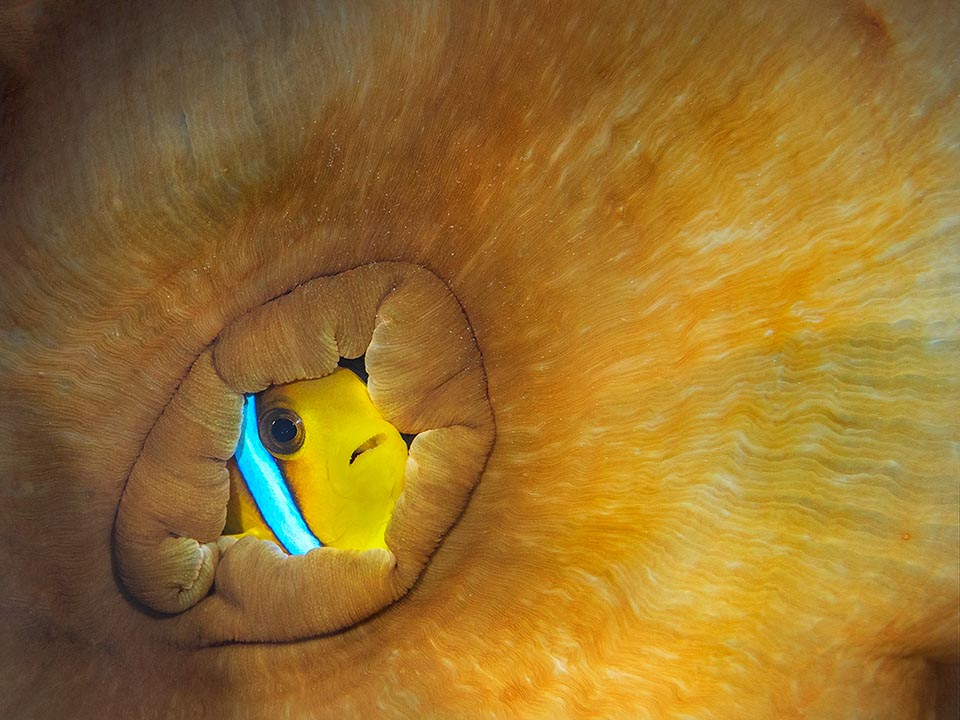 There was an importunate and the actinia has closed on itself, like a ball, with the guests. From the opening hole now, a small fish looks out to signal that all around is quiet © Rafi Amar

Like all clownfishes, the Amphiprion bicinctus lives in symbiosis with actinias. Thanks to the mucus covering the scales, the juveniles become gradually insensible to the poison of the host and adopt it. A shelter home, in the shade of the tentacles, where they do not hesitate to plunge for escaping the eyes of the predators. As compensation, they clean up the actinia from the remnants of food and the parasites, protecting it bravely from the fishes which have the bad habit of nibbling at its tentacles. 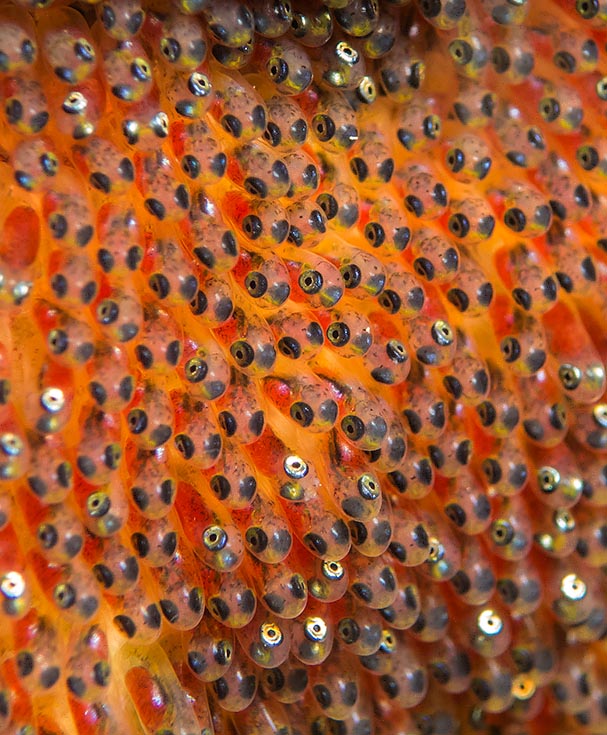 Eggs with growing embryos. The male keeps the watch ventilating them until hatching © Rafi Amar

The Twoband anemonefish nourishes of algae and small planktonic invertebrates.

It is a protrandic hermaphrodite species: the males, slightly smaller than their partners, can therefore transform in females once a certain age is reached.

Usually, the actinia gives hospitality to one pair, but other males can add and then a sort of a harem takes form with one dominant female.

When this last dies, the biggest male changes sex and takes its place.

At the time of the reproduction the eggs are stuck on the rock at the feet of the actinia.

The male fecundates them and stands the watch till the hatching ventilating them for several days with the fins.

The pelagic larvae disperse carried by the currents.

Later on, after the last larval stage, the juveniles will go looking for one of their five symbiotic actinias, without fishes or with a welcoming mistress of the house.

The Amphiprion bicinctus reproduces in captivity and is at times bred for the trade.

It is not therefore a species at risk, especially as it seems to tolerate well the consequences of the climate changes.

The populations may double in only 15 months and that it is not persecuted by man, seeing that the fishing vulnerability index is extremely low, marking only 10 on a scale of 100.