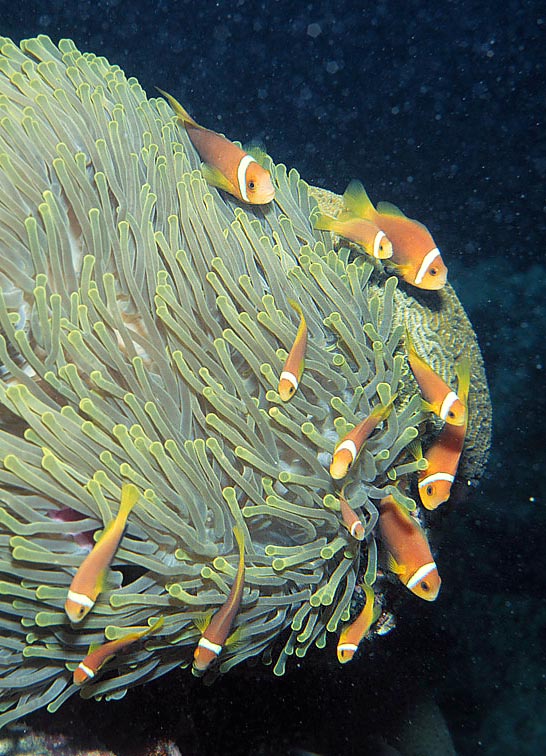 The Maldive anemonefish (Amphiprion nigripes Regan, 1908) belongs to the class of Actinopterygii, the ray-finned fishes, to the order of the Perciformes, to the vast family of Pomacentridae, which counts 28 genera and more than 320 species, and to the subfamily of the Amphiprioninae, the so-called clownfishes.

The name of the genus “amphripion” comes from the Greek “amphi” = “on both sides” and “prion” = saw, because on both sides of the head the preoperculum and the suboperculum have an indentation similar to a saw.

The name of the species, “nigripes”, comes from the Latin “niger” = black and “pes” = foot, therefore, a fish with the “black feet” due to the dark ventral fins.

It is present only along the tropical coasts of India, in Sri Lanka and at the Maldives.

It lives between the 2-25 m of depth, among the protective arms of its anemone, the Heteractis magnifica.

The Maldive anemonefish does not exceed the 11 cm of length. The body, rather stocky, is oval and compressed on the sides.

The caudal is truncated, more or less translucent, yellow-orange like the pectoral fins and generally the rear part of the fish, whilst the rest assumes more charged reddish-brown shades. Typical is a white vertical band, after the eye, at the level of the operculum, which crosses also the back like a saddle.

Like all clownfishes, the Amphiprion nigripes lives in symbiosis with an actinia having urticant tentacles. Since small, thanks to the protective mucus covering the scales, the young as soon as gotten out from the larval stage become gradually immune to its poison and adopt it as home, a safe haven where to hide, deterrent for the predators. 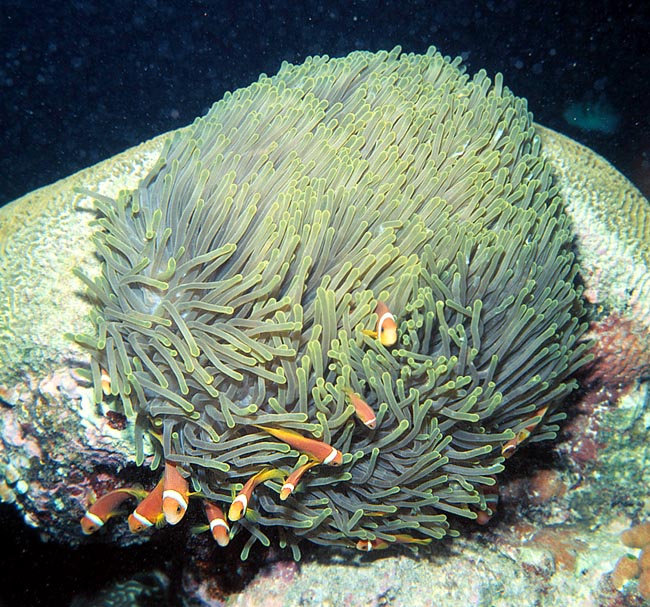 It is eternally associated to only one species of actinia: the Heteractis magnifica © Giuseppe Mazza

In return, they keep clean the actinia from the infesting sea weeds and from the food residues driving away, bravely, some species, such as the butterflyfishes, which have the bad habit of nibbling its tentacles.

Most of the butterflyfishes, 21 species on 30, may choose among various hosts, but the Amphiprion nigripes belongs to the nine very faithful butterflyfishes which have gotten married for the eternity with only one species of actinia, in this case, as already mentioned, the Heteractis magnifica.

Generally, these big anthozoans give hospitality to the harem of one dominant female with males of various sizes and upon its death, the biggest one changes sex and takes over.

The Maldive anemonefish nourishes of small algae and zooplankton, mostly crustaceans larvae and eggs carried by the currents.

It is a protandric hermaphrodite species: which means that the males may transform in females once a certain age is reached.

At the moment of the reproduction, the eggs are stuck on the rocks or on the bottom, usually at the feet of the actinia, and after the fecundation the male chosen keeps the watch till the hatching, ventilating them with the fins.

Then the larvae disperse and the small will look for a young actinia without fishes or for a welcoming community.

The Maldive anemonefish has reproduced more than once in captivity, but does not stand among the most bred because it accepts only one actinia, moreover bulky. In nature, the populations can double in only 15 months. It is not fished, it is not sensitive to the climate changes and the species has therefore a very low vulnerability index: just 23 on the scale of 100. 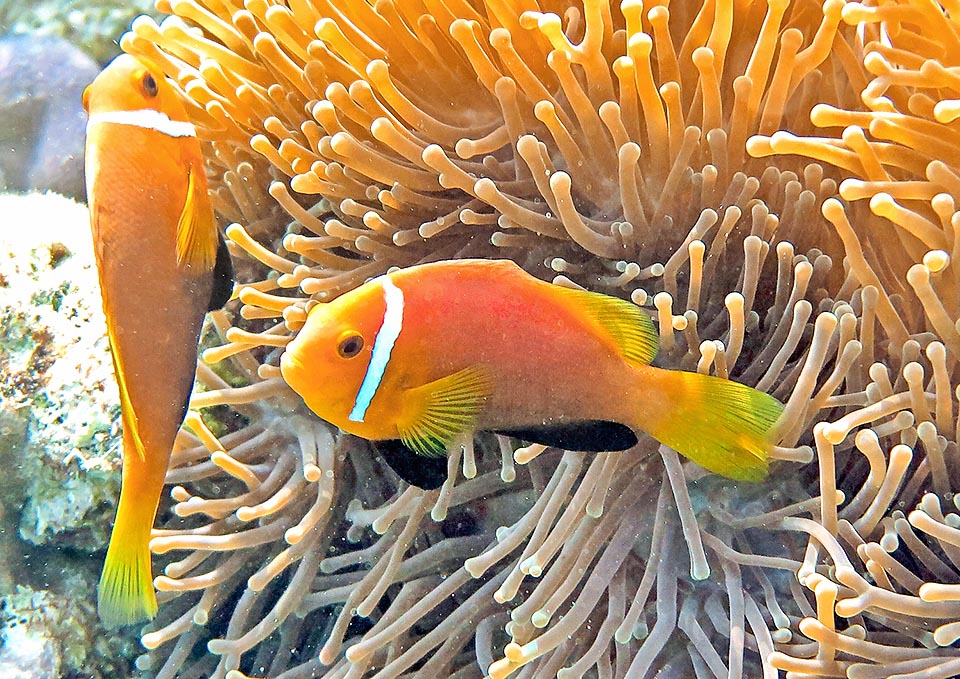