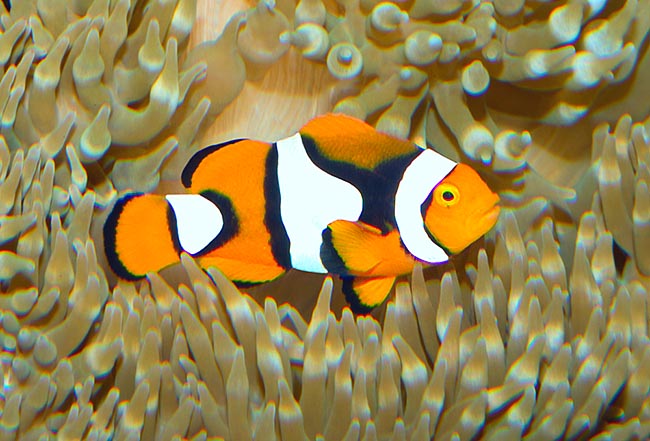 Much like Amphiprion ocellaris, Amphiprion percula is the best known Clownfish © Giuseppe Mazza

The Orange clownfish (Amphiprion percula Lacepède, 1802) belongs to the class of the Actinopterygii, the ray finned fishes, to the order of Percifor- mes, to the family of Pomacentridae and to subfamily Amphiprioninae, the clownfishes.

The name of the genus “amphiprion” comes from the Greek “amphi” = “on both sides” and “priön” = saw, seen that on both sided of the head the preoperculum and the suboperculum are indented like a saw.

The name of the species, “percula”, is the Latin diminutive of “perca”, generic term used by the old Romans for indicating a fish, as well as, also, “perke” in Greek.

In short it tells us simply that it is a little fish like its analogue Nemo, the likeable character of a famous cartoon.

It s at home in the tropical waters of the Western Pacific Ocean. Indicatively, we find it in Indonesia, Philippines, Hong Kong and China, in New Guinea, in Australia along the Great Barrier Reef up to the Solomon Islands and Vanuatu.

It lives in shallow waters, up to 15 m of depth, sheltered by the urticant tentacles of three species of actinias: the Heteractis crispa, the Heteractis magnifica and the Stichodactyla gigantea. 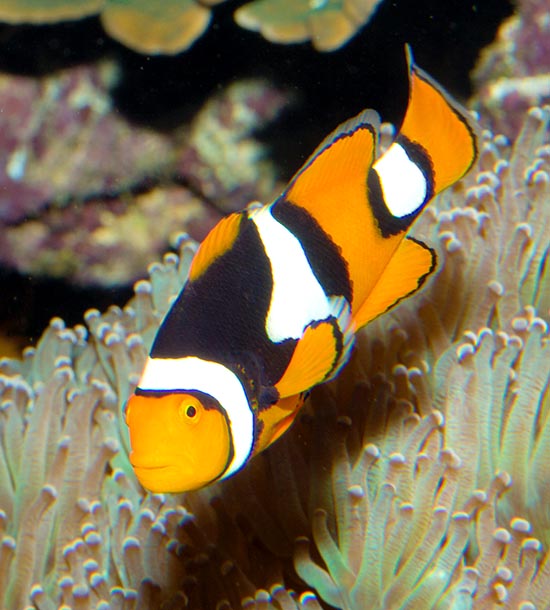 This is one of the smallest clownfishes, with a maximum length of 11 cm in the females and 8 cm in the males.

On the background colour, yellow-orange, stand out three wide white vertical bands intended to break the contour of the fish. They go from side to side like a saddle, emphasized by a black border. The first stands between the eye and the operculum, the second, wider and protruding forward with a loop, in the mid of the body and the third at level of the caudal peduncle. The fins, having the same colour as the body and often translucent on the border, have almost always showy black contours.

Like all clownfishes, it lives in symbiosis with actinias having urticant tentacles. Thanks to the mucus covering the scales, the juveniles become gradually insensible to the poison of the host which becomes a safe den, where to shelter when the predators are around. In exchange, they do the cleaning, eliminating the leftovers and the parasites of the actinia, and protect the same from the fishes which have the bad habit of nibbling its tentacles.

The Amphiprion percula nourishes of algae and small planktonic invertebrates. It is a protandric hermaphrodite speces: this means that the males transform in females once a certain age is reached. Usually, the actinia hosts one pair, but if the size allows this other immature males may add, thus forming a small community led by one female, recognizable at sight because more courageous and bigger. When this one dies, in a few weeks the breeding male changes of sex and the second in the hierarchy takes its place. The possible fights for the power happen, therefore, only among males. 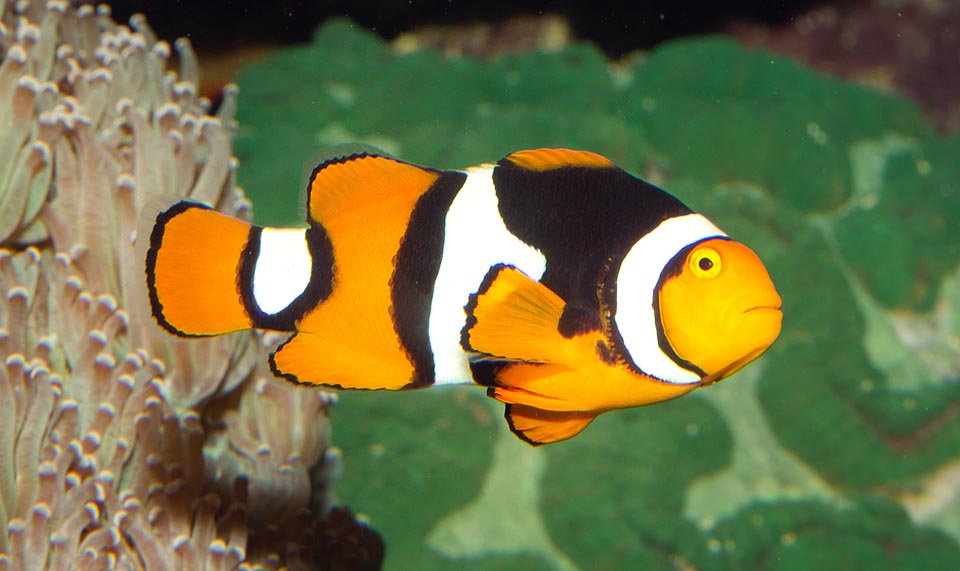 For the reproduction, the eggs are stuck at the feet of the actinia, on the underlying rock. The dominant male fecundates them and watches them, ventilating them with its fins, till when the hatching takes place, when the larvae will be taken off by the currents.

The Amphiprion percula reproduces in captivity and is often bred for the trade. In nature the populations may double in 15 months and have borne well, without harms, the degradations connected with the climate change. Therefore, the species enjoys nowadays of a very low vulnerability index: only 23 on a scale of 100.