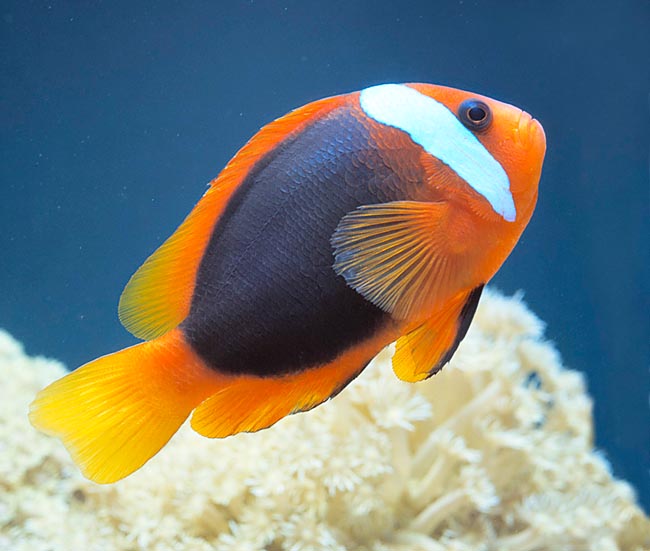 The Red anemonefish ( Amphiprion rubrocinctus Richardson, 1842), belongs to the class of Actinopterygii, the ray-finned fishes, to the order of Perciformes, family Pomacentridae and subfamily of Amphiprioninae, the clownfishes.

The name of the genus “amphiprion” comes from the Greek “amphi” = “on both sides” and “priön” = saw, because on both sides of the head the preoperculum and the suboperculum show a saw-shaped indentation.

The name of the species “rubrocinctus” comes from the Latn “rubber” = red and “cinctus” = girdle, belt, with reference to the red border surrounding the body.

It is at home in the Eastern Indian Ocean along the Australian coasts.

It lives in up to 8 m of depth, where its two symbiont actinias are fixed: the Entacmaea quadricolor and the Stichodactyla gigantea.

It reaches the 14 cm of length with flat and tall body like the Amphiprion clarkii e l’ Amphiprion ephippium.

The livery, characterized by red-orange shades like the Amphiprion ephippium, has also a showy white band near the eye and the dark zone extends practically all over the body. Also the ventral fins have the fore border black, but are never completely black as in the Amphiprion melanopus, for the rest very similar. The tail and the rear part of the dorsal fin fade to orange yellow. 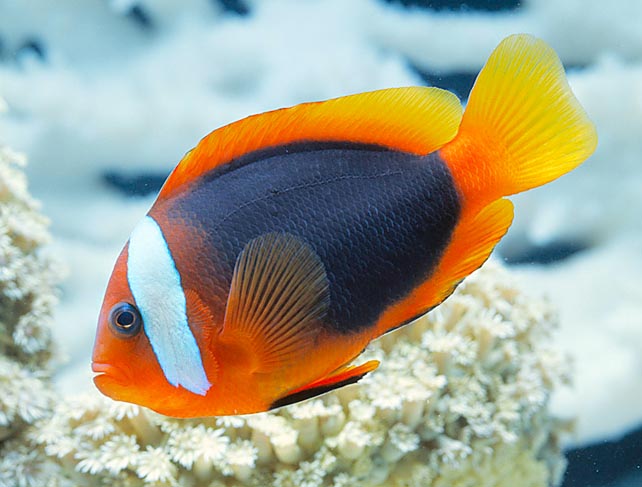 It nourishes of algae, small invertebrates and of all the edible animal fragments passing close.

Protected by protective mucus covering the scales, it is immune to the poison of the two actinias hosting it, and finds there, like all clownfishes, a safe haven. In exchange, it takes off the parasites and the leftovers of the actinia and chases away the fishes which nourish of tentacles. The Amphiprion rubrocinctus is a protandric hermaphrodite species: the males, growing, can in fact, at the due time, transform in females.

If we observe the actinias of good size, we discover that it forms almost always small communities headed by a dominant female bigger than the others. A queen with the spouse, and often smallest males waiting for the day of her death for moving up in rank. When this happens, the surviving spouse takes the place of the female and changes sex for then coupling with the biggest male in the group.

In nature the eggs are stuck on the rocks at the feet of the actinia. The male fecundates them and surveys them, ventilating them with the fins in order to avoid fungal infections. Upon the hatching, it goes back among the arms of the actinia, while the larvae disperse carried away by the currents.

As for the Amphiprion ephippium it is a fish little frequent in the aquaria, due to the modest diffusion, the size and the difficulties in finding one of the two symbiont anthozoans. In nature, the populations may double in only 15 months and their actinias have not gotten damages, like the corals, from the recent climate changes. The vulnerability index of the species is therefore nowadays very low: just 23 on a scale of 100.