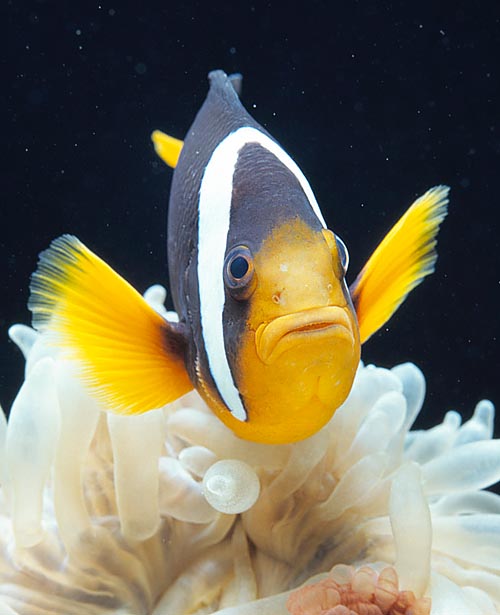 The Yellowtail clownfish (Amphiprion clarkii Bennett, 1830) belongs to the class of the Actinopterygii, the ray-finned fishes, to the order of Perciformes, to the family of Pomacentridae and to the subfamily of the clownfishes, the Amphiprioninae.

The name of the genus Amphiprion comes from the Greek “amphi” = “on both sides” and “priön” = saw, because on both sides of the head the preoperculum and the suboperculum show an indent shaped like a saw.

The name of the species clarkii honours the memory of the engraver John Clark, who helped Bennett with the drawings of his book about the fishes found on the coast of Ceylon.

It lives the tropical waters of the Indo-Pacific. It is present, indicatively, from Tanzania to the Persian Gulf, to Mauritius and the Maldives, in Sri Lanka, to the Andaman Islands, in Thailand, Australia, Indonesia, New Guinea, Micronesia, Philippines, Taiwan and in China up to southern Japan. In the southern hemisphere it reaches Tonga and New Caledonia.

The livery, rather variable on the geographic level, is brown-orange on the snout, the belly and the fins, but the dorsal mostly almost black as the remainder of the body. In any case are evident three white vertical bands interesting also the back, breaking the contour of the fish. The first is at level of the operculum, close to the eye, the second at the beginning of the soft rays of the dorsal and the third one on the caudal peduncle. The caudal fin can be yellow-orange or white. 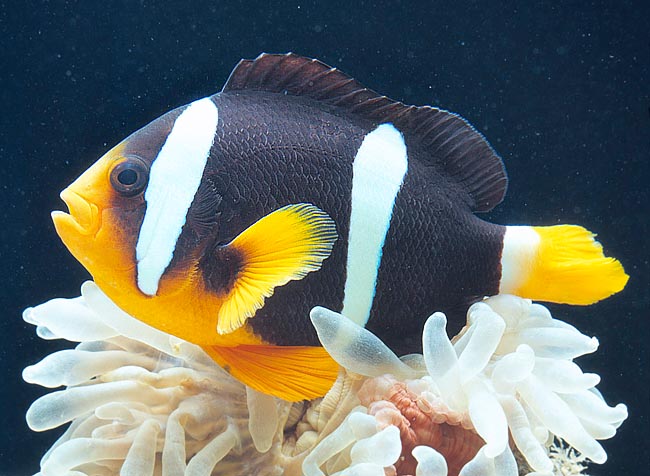 The Amphiprion clarkii nourishes of algae, zooplankton and of the fragments of edible animas passing close to him.

As we have seen, it lives in symbiosis with various species of actinias with urticant tentacles, lethal for other fishes, but to which it gets accustomed since young thanks to the protective mucus covering its scales. In this way it finds a sure shelter for hiding in case of danger, and in exchange it eliminates the leftover food and the parasites of the host, chasing away the fishes that nibble its tentacles.

The yellowtail clownfish is a protandric hermaphrodite species, the males, while growing, can therefore transform into females.

Usually a small community lives in an actinia having adequate size. The dominant female is evident at once, bigger and braver, followed in the hierarchy by the spouse and various smaller males. When the queen dies, in a few weeks the surviving spouse becomes female and gets married with the biggest male of the group, whilst the others advance of a step in the social ladder. In nature, the eggs are stuck at the feet of the actinia, on the rock. The male fecundates them and surveys them, ventilating them with the fins until the hatching comes, and the newborn larvae are dispersed by the currents.

If well kept, the yellowtail clownfish may reproduce in aquarium and may live even a decade. In nature the populations need 1,4-4,4 years for doubling their number and the vulnerability index of the species is fairly low, at the level 32 on a scale of 100.