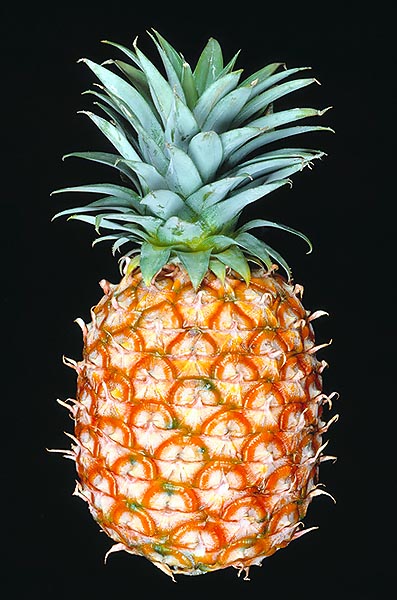 The Ananas comosus (L.) Merr. (1917) is probably native to Brazil and Paraguay. The cultivated plants are the outcome of a long selection which started in the pre-Columbian times.

The name of the genus comes from “nanas”, which in Guarani language means flower, perfume; the Latin name of the species, “comosus”, maned, covered by hair, refers to the tuft of leaves on the fruit.

Terrestrial perennial herbaceous, evergreen monocarpic (it bears fruit only one time during its existence), with a short stem, formed by a rosette of ribbon leaves, coriaceous, of a green-grey colour, tending to the reddish if in full sun, long up to 1,5 m, even if in the cultivated plants the length can be remarkably inferior, and 4-5 cm broad, with the borders equipped with cutting, bent thorns and with a thorn at the extremity; there are varieties with few thorns or unarmed, selected for facilitating the cultivation and the picking of the fruit.

The floral scape, robust, 30-50 cm long, develops at the centre of the rosette and ends with a globose, thick, about 30 cm long, inflorescence, with 50-200 flowers, each 12-24 mm long, subtended by a bract which can be green, yellow or red, with on the top a thick tuft of leaves.

The blossoming, which proceeds from the bottom upwards, lasts 15-30 days, the flowers are bisexual, but self-incompatible and the fructification happens by parthenocarpy (development of the fruit without fecundation), the fruit is a composite fruit (syncarp), of an initially green colour, then yellow or orange-red when ripe, formed by the fusion of the ripe ovaries with the base of the sepals and of the bracts and with the bark of the floral axis the textures of which, while enlarging, become fleshy and juicy.

The seeds are uncommon even if in presence of crossed fecundation (the main natural pollinators are the hummingbirds), are small, 3,5 mm x 1-2 mm, hard and of brown colour. The blossoming is variable by nature, therefore in the agronomic practice the induction synchronized with the blooming, aiming to a similarly synchronized picking, is done chemically spraying compounds which release ethylene, a hormone able to stimulate the differentiation of the vegetative apex in inflorescence.

The reproduction takes place by vegetative way through the new plants coming out between the leaves from axillary gemmae, on the stem under the fruit and the “tuft” of laves over the fruit; in the cultivations around the Equator they take 18-20 months to reach the maturation and fructify, the times get longer as we get far from same. 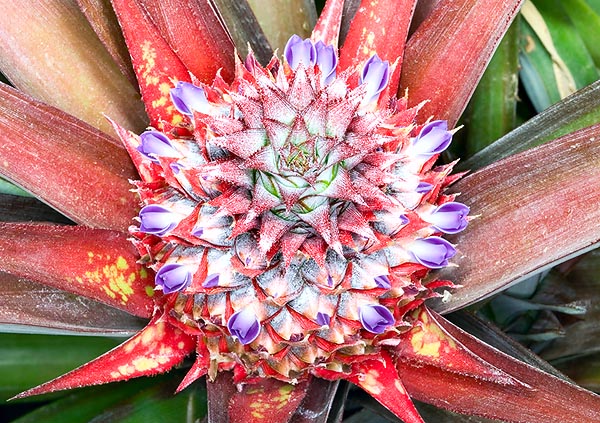 It is one of the most popular and economically important tropical fruits cultivable also in the subtropical climates, approximately in a belt comprised between the 30th parallel in the northern hemisphere and the 33rd parallel in the southern one, mainly rich of vitamin C, but A and B too, cultivated both for local consumption and for export, either as it is or tinned in slices and as juice.

Some varieties are cultivated for getting from the leaves robust fibres suitable for cordages, textures and in the paper industry; the fruit, and the stem even more, contain bromelain, a protelytic enzyme which, purified, is utilized both in pharmacology, mainly as anti inflammatory and anti oedematose, and in the alimentary industry for clarifying the bier, in the tinned meat, for rendering it more tender, and in the pre-cooked cereals.

The plant has also an ornamental employment, in particular the varieties with variegated foliage, both as outdoor plant, where the climate allows it, isolated or for forming flower-beds and edges, in full sun on light, permeable, sandy, acidic and rich of organic substance, soils, and as indoor plant, in pot, choosing the most possible luminous position.

Watering must be regular in summer, but allowing the superficial loam stratum to dry up before the next watering, and reduced in winter, as it is a plant able to stand long drought periods, but subject to rottenness when in presence of high humidity and low temperatures, temperatures which, for this reason, is good to be kept over the 16°C. 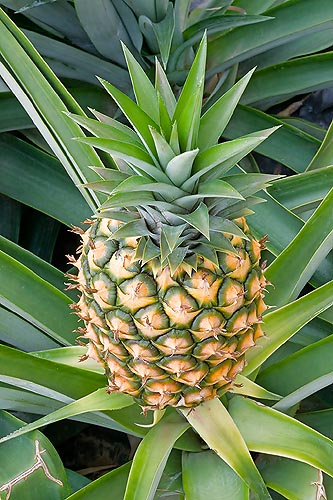 The presence of the characteristic tuft of leaves on the fruit, and the possibility of getting from them a new plant, have since ever aroused the curiosity and interest both in this and in the Ananas bracteatus.

The following is a simple method for getting new plants.

We select a plant with an intact tuft and with bright colours, we cut it at the base with a sharpened knife, eliminating possible residues of pulp which might become source of pathogen agents, and we leave it to dry up for some days.

We detach some basal leaves so that we discover the signs of roots present for a height of about 1 cm and we place it in sandy loam or with addiction of other inert materials in a very luminous location, where it can receive some hours of sun, with temperatures over the 18°C, the loam must be kept just humid, the rooting takes place usually in two, three months.

When cultivated in apartment, the new plant reaches the maturity after some years and even by then, due to the intrinsic variability and the not much favourable habitat conditions, it rarely blooms.

A system within everyone’s reach for obviating to this consists in hooding the plant with a transparent plastic film and place at the base one-two cut apples (the ripe fruits, in particular the apple, develop ethylene, hormone which, as already said, helps the blooming of the pineapple), for about three weeks; after six-eight weeks, if the plant is already ripe, the blooming should begin.