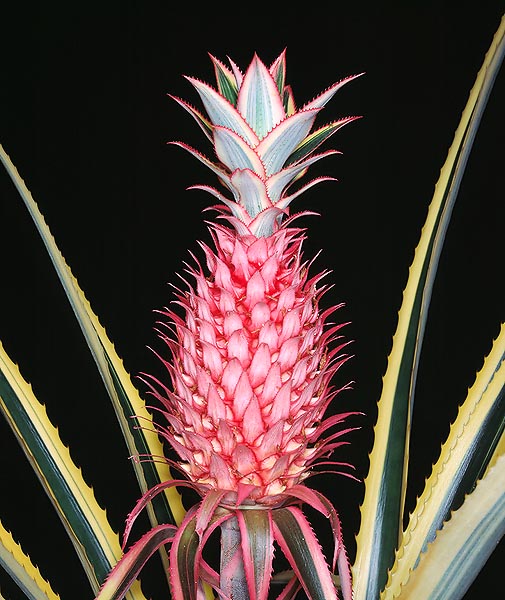 An ornamental pine-apple, appreciated also at home, in spite of thorns © G. Mazza

The Ananas bracteatus (Lindl.) Schult. & Schult.f. (1830) is native to Argentina, Brazil, Ecuador and Paraguay, where it grows in the deciduous or semi-deciduous tropical forests up to 500 m of altitude.

The name of the genus comes from “nanas”, which in Guarani language means flower, perfume; the Latin name of the species “bracteatus”, covered by thin leaves, refers to the showy bracts of the inflorescence.

Perennial, terrestrial, monocarpic (it bears fruit only one time in its life), about 1 m tall, formed by a rosette of ribbon leaves, coriaceous, of a dark green colour, long up to 1,5 m and about 4 cm broad, with the edges furnished of curved, cutting, thorns.

The floral scape, robust and straight, develops at the centre of the rosette, long up to about 50 cm and ends with an inflorescence formed by showy, imbricate bracts, with serrate, pink or bright red margins, which surround the flowers holding bright blue petals and with, on the top, a thick rosette of leaves.

The fruit is composite (syncarp), of red colour, formed by the fusion of the ripe ovaries with the base of the sepals and the bracts and with the bark of the floral axis, the textures of which, while enlarging, become fleshy and juicy; it is edible, but smaller, full of seeds and less juicy than the Ananas comosus one.

Several varieties do exist, with cream white striated leaves, the most sought-after is the Ananas bracteatus ‘Tricolor’, the long leaves of which are covered by green, yellow and red longitudinal strips. The plant tufts quickly and easily reproduces in a vegetative way by means of the new plants which come out from the axillary gemmae placed between the leaves and on the stem under the fruit, and the “wisp” of leaves over the fruit.

Very ornamental and appreciated plant, in spite of the thorns, both for its leaves, in particular those of the variegated varieties, and for the showy inflorescences and its long-lasting fruits, utilized in the tropical and subtropical gardens, as isolated or for forming flower-beds, edges, and also as defensive barriers, in full sun for a stronger coloration of the leaves and the fruits.

In pot, it is utilized for indoor decoration in luminous and spacious locations, seen the dimensions of the plant, even if there is the tendency to select for this purpose varieties of smaller sizes; watering must be regular in summer, but allowing the superficial stratum of the loam, sandy in order to allow draining and slightly acidic, to dry up, before giving water again, and reduced in winter. The plant requires high temperatures, starting from 18°C, for a best growth, even if it stands temperatures of a few grades less if kept in a dry position.

The plant has also employments other than the ornamental one, for instance, in the origin countries, from the leaves they get particularly resistant fibres for ropes and textures; the fruit, and even more the stem, contain bromelain, a proteolytic enzyme which, purified, is utilized both in pharmacology, mainly as anti inflammatory and anti oedematose, and in the alimentary industry for clarifying the bier, in tinned meat, for tendering it, and in the pre-cooked cereals.

For other information about the reproduction by means of the rosette of the leaves on the fruit, please see Ananas comosus.