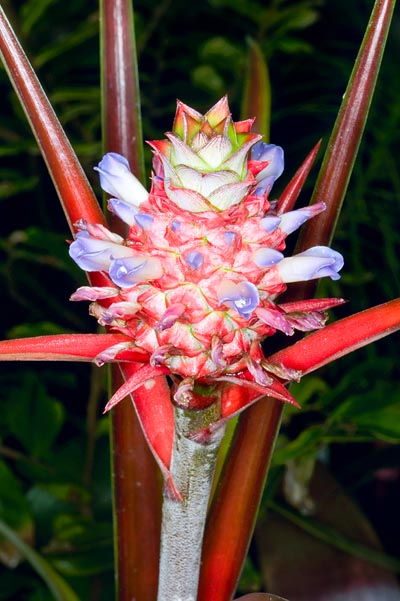 Indoor plant with an industrial future due to its fibres © Mazza

The name of the genus comes from “nanas”, which, in Guarani language, means flower, scent; the name of the species is the Latin word “lucidus” = bright, shining, with reference to the leaves which are glossy on the upper side.

Evergreen, herbaceous plant, monocarpic (bearing fruit only one time during its existence), acaulescent, terrestrial, having a certain polymorphism, is formed by a thick rosette of lanceolate leaves, broad up to about 60 cm of diameter.

The leaves, 0,7-1 m long, and 3-4 cm broad at the centre, are rigid and ascending, with the apices furnished with a robust thorn and the margins unarmed, of a glossy green colour on the upper side, which, in full sun, assume bronzy tones, and green grey below, due to the presence of small silvery scales; it exists in the wild also with the leaves of a more or less intense reddish bronze colour.

The inflorescence, at the centre of the rosette, is formed by a floral scape, long up to about 80 cm, of green colour, covered by a thin whitish tomentum and provided with lanceolate, sharp, bracts, similar to the leaves.

The scape ends in an inflorescence formed by an about 4 cm long and 3 cm broad spike, of hermaphrodite flowers surrounded by pink bracts; the spike carries on top a thick rosette of leaves which later on is surrounded by several smaller ones. The flowers have fleshy green sepals, with reddish edges and petals, long about 15 mm and 3 mm broad, of a white colour at the base, and violet blue on the apex.

The fruit, which lasts on the plant for a long time, is a syncarp (aggregate fruit), of about 5 cm of diameter and 6-8 cm of height, of a pink yellow to pale red colour, formed by the fusion to the ripe ovaries with the base of the sepals and of the bracts, which tissues, when enlarging, become fleshy. The fruit, very fibrous, is not edible and usually contains few seeds, at times none.

The plant reproduces easily by vegetative way through the new plants which come out from axillary gemmae between the leaves and the “tufts” of leaves over the fruit; recently, in Brazil, they have started its multiplication on a wide scale thanks to the micro-propagation for the production of ornamental plants meant for export to Europe and USA.

Very ornamental plant, both for the leaves, in particular those of the varieties with bronzy green or variegated leaves, and for the long lasting infructescences, can be cultivated in open spaces only in the tropical and humid subtropical zones, being rather sensitive to low temperatures. It can be utilized alone or in groups, in full sun or light shade, on very aerated, porous, draining, possibly sandy, substrata.

Elsewhere, it is to be cultivated in pot on substrata having the same characteristics foreseen for the outdoor cultivation, to be utilized in very luminous places with temperatures over the 14-16 °C, best by 20-22 °C; watering must be regular in summer, but allowing the surface stratum of loam to dry up before watering again, and reduced in winter.

In spite of the length of the leaves, it does not take much space, seen their vertical orientation, rendering it particularly suitable, considering also the absence of thorns on the margins, to indoor decoration.

The plant has also other employments besides the ornamental one, it is in fact cultivated, since remote times, by the natives for getting fibres from the leaves as they are particularly flexible, resistant, and long lasting, utilized for fabricating ropes, tissues and several handicrafts.

In the recent years, this fibre has been utilized also in industrial applications, and a further increment is expected, in particular in the car industry for the production of bio-degradable materials in place of the fibreglass, as it is almost doubly resistant of same, to be employed in the internal cars’ fittings.