The Bering wolffish (Anarhichas orientalis Pallas, 1814) belongs to the class of the Actinopterygii, the ray-finned fishes, to the order of the Perciformes and to the family of the Anarhichadidae, that counts only 2 genera and 5 species: the Anarhichas denticulatus Krøyer, 1845, l’Anarhichas lupus Linnaeus, 1758, l’Anarhichas minor Olafsen, 1772, l’Anarhichas orientalis Pallas, 1814 and the Anarrhichthys ocellatus Ayres, 1855. All voracious fishes, elongated as snakes, that might lead to think to the morays (Murenidae) but without pectoral fins. But, size apart, some scholars note a certain affinity with the family of the Blenniidae.

The name of the genus Anarhichas comes from the Greek “ανα” (ana) = on and “αρρίχομάί” (arrichomai) = to go with feet and hands, that is to climb, with reference to the belief that these fishes in spring climbed on the rocks, with the help of the tail and the fins, to lay the eggs. The species orientalis, conversely, refers in Latin to the zone of origin.

The Anarhichas orientalis is a rare species with a very fragmented distribution and small isolated populations. It has been found in North Pacific Ocean, from the island of Hokkaido in northern Japan to the Sea of Okhotsk, then in the Bering Sea, in Alaska and in the Arctic Ocean, with three specimens fished in Canada. 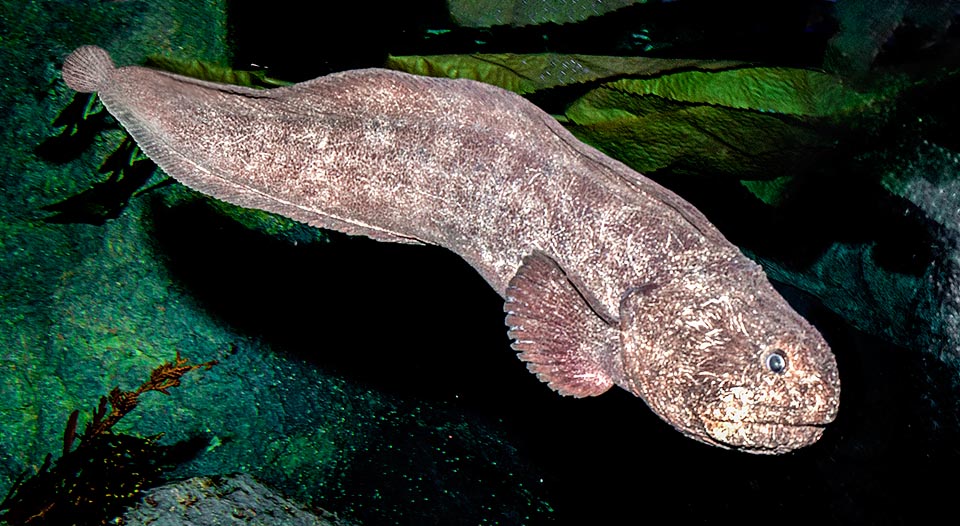 Very rare species, present with isolated populations from north of Japan to the Arctic Ocean, the Anarhichas orientalis can be 115 cm long with a weight of 15 kg © G. Mazza

It lives along the coasts, on rock sea-beds rich of weeds in even very shallow waters during the summer period; more offshore, in winter, when the coasts freeze, in less cold waters. It is usually found at 10-30 m of depth, going down rarely, depending on the season and the preys, even up to 100 m. And it is rightly in the abundance in some particular sites of crustaceans, mollusks and sea urchins, that is probably located the answer to the unusual enormous geographic distance between one population and another.

The Bering wolffish reaches the age of 17 years with a length of about 115 cm and a weight of 15 kg, but we are based on few reports and these values might be easily exceeded. There is no sexual dimorphism. The body, at almost circular section,ends with a thin caudal peduncle. It is marbling brown, with mimetic ripples, more or less dark in the adults, whilst the young show spots on the head and 3-5 stripes, equally dark, on the sides. 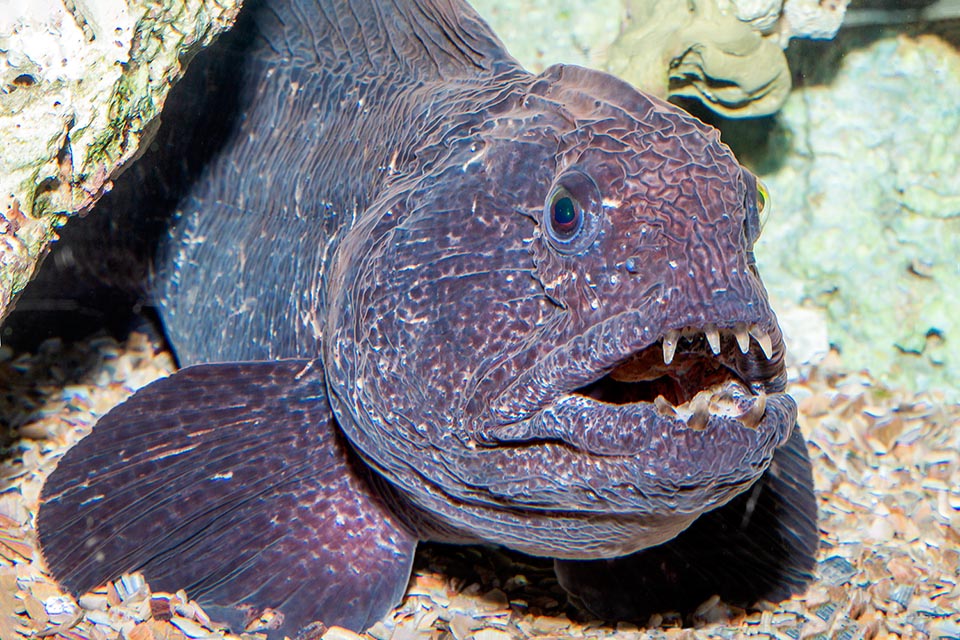 It lives along the coasts on rocky sea-beds and seen the huge pectoral fins that distinguish it at first sight from the morays, once they thought they served with the tail to climb rocks. The powerful canines pierce easily the shells of molluscs and the armours of the crustaceans that are, with the sea urchins, at the base of their feeding © Giuseppe Mazza

The snout has a steep profile with 4 terrifying canines, protruding from the jaws, to seize and pierce the thickest shells or break as if nothing happened the armour of whatever crustacean.

In the stomach of the few fished Anarhichas orientalis they have found mollusks belonging to the genus Buccinum, crustaceans of the genus Mya, sea urchins of the genus Strongylocentrotus, but also starfishes and some fish. It seems that the matings take place in October-November and the deposition follows in spring or during the summer. By the end of May a fished female contained already well developped eggs. It is not known how many are laid but they are quite big, reaching the 4-4,5 cm. 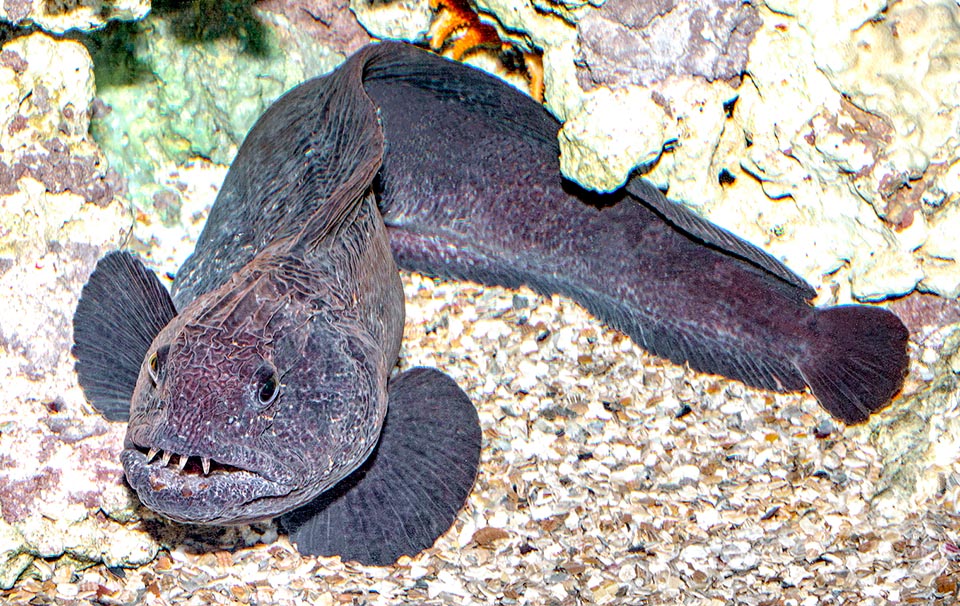 It is hunted by the Ringed seal (Phoca hispida) and by Eskimos. But the major threat comes today from the trawling and the pollution linked to the oil activities © G. Mazza

It is difficult to say if it is an endangered species. It is looked for only by the Eskimos, who utilize also its skin, very resistant, for leggings and footwear, seen that it swells with the water rendering the seams waterproof.

But these are small honest survival deductions, the only threat, apart from the Ringed seal (Phoca hispida) that is the only natural predator of the Anarhichas orientalis, might come from the trawling and the pollution caused by the oil activities.

Due to the absence of data, seen the rarity of the species and the geographical dispersion, it is nowadays (2019) very difficult to establish a vulnerability index. Because of the weak resilience, with a doubling of the populations over 4,5-14 years, it might already mark 65 on a scale of 100