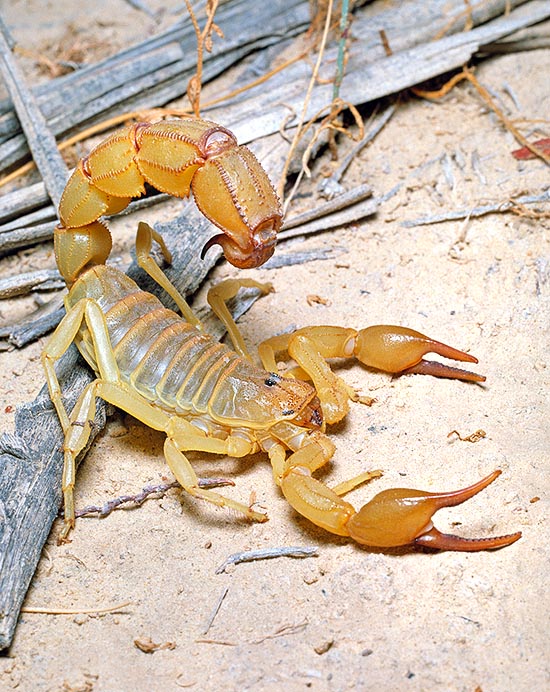 Androctonus australis is a 10 cm scorpion present in a wide belt of North Africa, up to Somalia and after the Red Sea in Asia up to India. It predates coleopterans, beetles and spiders, but at times eats also small vertebrates like lizards or micro-rodents © Giuseppe Mazza

The genus Androctonus , counting about 18 species, is present in northern and eastern Africa, in the Middle East and, eastwards, up to the reliefs of the Hindu Kush.

This scorpion lives in the arid locations and in the desertic areas, is found in stony lands, arid mountain regions or even on the slopes of the sandy dunes.

Unfortunately for the man, this species is found often near to the dwellings, in cracks of the walls or between the ruins. A study made on the distribution of this scorpion in Sfax, Tunisia, has shown that the hedges of cactuses which often are planted for limiting the properties stand among its preferred habitats. It has been suggested that the removal of these hedges might reduce the dangers of stings for the inhabitants.

Androctonus australis is a medium sized scorpion that can reach a length of 10 cm. The colouration is usually yellowish, but is in any case much variable. The last segments of the tail and the palpal chelae are usually darker, especially terminally. The abdomen is formed by 12 segments, the last five of which form the “tail” bearing the telson, the last segment, equipped with the sting and of the venom glands. The tail (metasoma) is very thick and strong, with the terminal segments usually bigger than the first ones. Below, close to the hind legs, are present two combs, sensorial organs probably sensible to vibratory and/or chemical stimuli, which in the male have longer and more numerous teeth. The combs are bent backward and outward, so much to be at times visible also when observing the specimen from on top. The chelae are usually more developed in the female.

It does not dig dens, but more often hides under the stones or in cracks of the rock: it loves in fact the dark and cool recesses, and for this reason it burrows and comes out in the open usually only during the night. The diet is mainly based on invertebrates, such as coleopterans, cockroaches and spiders though, sometimes, it eats small vertebrates like lizards or micro-rodents. Like all scorpions, Androctonus australis is not a social animal. 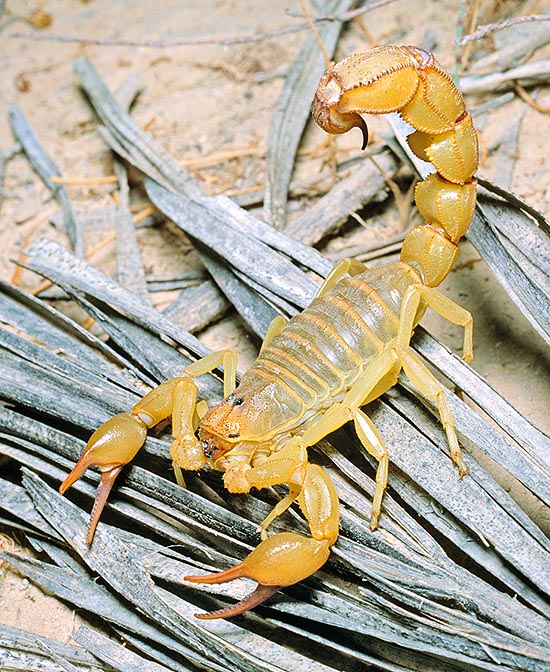 As its scientific name state, its sting can aver fatal for the man © Giuseppe Mazza

The mating occurs after a long and articulated courting dance: a sort of couple ballet who, grasping each other by the chelae, turns face to face, with the tail raised and the sting erected, thing that has led to think erroneously of a fight. With this dance the male pushes the female towards the site chosen for the coupling and finally will deposit the spermatophore into the genital orifice of the female.

After a gestation of 4-6 months, the female delivers some tens of small scorpions that then will carry on the back until the first moult. The growth foresees 7 or 8 moults before reaching the maturity. The duration of life is of about 5 years.

Unlike many other desert animals, this scorpion in case of sand storms does not hide under the sand or under the stones, and can stand the abrasive action of the sand grains pushed by the wind at high speed, intolerable situation for other living beings and very damaging for the human artefacts.

This resistance has intrigued the bio-engineers, who were able to highlight the fact that the chitinous armour of the scorpion is characterized by a micro-granular surface with protuberances of the size of a few micrometres. Experimental and theoretical studies of fluid dynamics suggest that the irregularities of the surface modify the flux of the wind and of the grains of sand in such a way to minimize the abrasive effects. It is thought that these observations may lead to design materials in condition of resisting in optimal way to the abrasive action of the sand, to be utilized for the coating of aircrafts and of other artefacts.

Androctonus australis is one of the most dangerous scorpions of the countries of North Africa and of the Middle East and has remarkable health significance seen that it is cause of numerous poisonings which may have even a fatal outcome. Its venom contains several different toxic proteins, which are responsible of almost all the fatal effects for the man. Most of these toxins act mainly on the ion channels responsible of the propagation of the electrical potentials in the nervous cells. The various toxins alter the function of different types of channels; can be involved sodium as well as potassium, calcium or chloride channels, causing in this way very complex effects. Besides the neurotoxic effects the poisoning, through its action on the various types of ion channels, causes however also important inflammatory phenomena due to the activation of the cells of the immune system. These can be responsible of the long term effects of the poisoning, in particular of the pulmonary and cardiac damages. It is in fact known that the persons poisoned surviving to the acute effects have often permanent damages.

Experimental studies done on animals show a massive activation of the inflammatory response caused by hyper-stimulation of the immune cells which is cause of serious damages to the tissues, like pulmonary oedema and of the myocardium, pulmonary haemorrhages and necrosis, acute bronchopneumonia.

The mortality appears especially in the children and in the debilitated persons. The affected people show different types of pathologies, due to the effects of the stimulation of the autonomic nervous system as well as of the central one: hyper excitation, hyperthermia, vomit, profuse sweating and salivation, tremors and convulsions. The inflammatory phenomena produce fever, anorexia, vasodilatation, hypotension and increased permeability from the capillaries resulting in oedema. The most serious effects include cardiac dysfunctions, pulmonary oedema and even fatal shock. 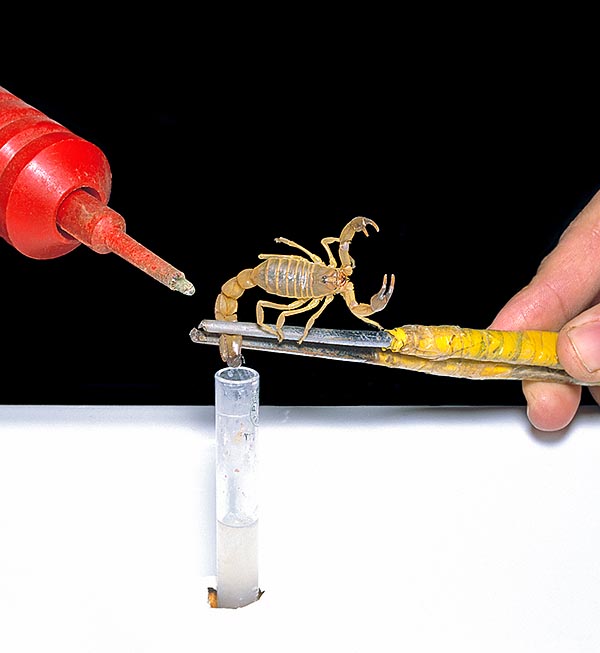 The number of cases of poisoning is very high in the various countries of North Africa and of Middle East with, for instance, more than 29.000 cases in Morocco in 2009 or 30.000 cases per year in Iran. The population at higher risk is that of the young with less than 15 years of age, thanks also to the habit of playing barefoot outside the house after the sunset. The mortality depends also from the possibility in providing appropriate assistance besides the age, the body weight and the health status of the patient and varies, in the various studies from the 0,2% up to the 2%.

The different toxins containing in the poison of this scorpion, seen their specific action on different types of channels, represent an important instrument in the pharmacological research for the study of the ion channels functions of the nervous cells.

The treatment of the persons bitten by an Androctonus australis must provide the pharmacological symptomatic therapies, associated to the administration of antivenom of Androctonus.

Typically, these serums, containing antibodies against the toxins, are produced inoculating in animals appropriate doses of the venom of the scorpion, duly treated for reducing its toxicity without however modifying the capacity of inducing the production of antibodies. The venom utilized for the production of the serums is taken from scorpions maintained in terraria, with a practice often called “milking”.

The animals utilized for the inoculations can be horses or other species. Recently in the Middle East have been utilized for the production of the antivenoms some dromedaries, with promising results seen that the serum of dromedary seems to reduce the risk of inducing in the patients an anaphylactic shock in comparison to what can happen with the serums of equine origin. More recently, for immunizing the animal has been proposed to use synthetic and modified toxins of scorpion, practically not toxic but valid immunologically. In perspective, these synthetic toxins, seen their absence of toxicity, might even be utilized for producing a serum directly in the man. A very promising approach is that of producing, by means of cells cultivated in vitro, monoclonal antibodies turned towards the various types of toxins, that may have greater efficacy and, especially, present a low risk of anaphylactic reactions.

The legend of the scorpions’ suicide

A widespread legend affirms that the scorpions, when surrounded by the fire, choose to suicide with their own poisoned sting. A 1998 study has proven that the venom of the scorpion Androctonus australis, in fatal doses for other arthropods, has no effect on the scorpion itself, as the on channels of the membrane of the nervous cells of the scorpion are not sensible to the action of its toxins. Therefore, it is not possible for this animal to commit suicide with its own poison.