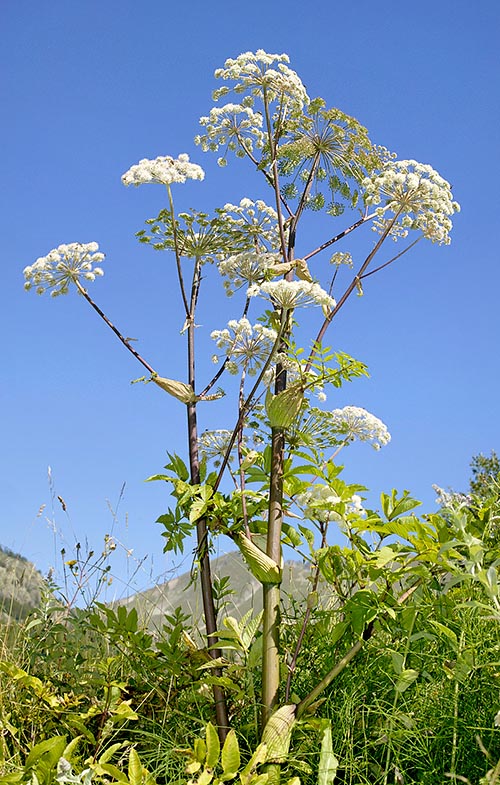 The genus Angelica includes about fifty species mainly diffused in the temperate and cold zones of the world. The Wild angelica is a species with Euro-Siberian distribution that is, of the cold and temperate-cold areas of Europe, boreal and medium Asia.

The name of the genus comes from the Greek “aggelos” = angel, messenger, and refers to the pleasant smell of the plant and to its medicinal properties, and it was the Leipzig physician August Quirinus Bachmann (Rivinus), in the XVII century, to give the name of “herba angelica” to the plant, as he wanted, in such way, to affirm its sacred origins: a legend says that it was the archangel Gabriel (in some zones it is associated to the archangel Raphael and to the archangel Michael) to make known the properties of the plant to the men. The name of the species comes from the Latin “silvèster”, from “silva”, that is, forest, sylvan, of the forests or of the woods.

The wild angelica (Angelica sylvestris L. 1753) is a perennial large herbaceous plant, with erect stems, 50-150 (200) cm tall stems, somewhat zigzagging, striated, hollow, ramose-corymbiform, of purple-red pruinose-glaucous colour. The root is rhizomatous, of pale or greyish brown colour and contains a lemon-yellow juice, of aromatic smell, acrid and pungent. The basal leaves are quite big (up to 60 cm long), with triangular contour, (2)-3 pinnatisect, divided in ovate-lanceolate segments, the margin has sharp teeth ending in whitish cartilaginous spinules, with much dilated and swollen sheaths of the petioles wrapping and protecting the young axillary branches and the inflorescences still in bud. Inflorescences carried by 20-30 (50) rays forming conical umbels, small flowers, with 5 pink-pinkish petals (flowering from May to August). The flowers are elliptic diachenia, compressed on the back, of 2-3 x 3-4 mm with two membranaceous wings as wider as the seed and three well evident longitudinal ribs.

The wild angelica grows in the woods and in the humid locations, in ravines, hedges and on the banks of the water streams. It is common from the plain up to 1600 m of altitude. In the context of the entity Angelica sylvestris L. two subspecies have been distinguished: the sylvestris, common from the high plan-hill up to the mid-mountain, with oval or oval lanceolate foliar segments, normally not decurrent on the petiole. The fruits are 4-5,5 mm long and 3-4 (5) mm broad, and the subsp. montana (= Angelica elatior), diffused in some mountain regions and of the subalpine belt; it presents narrower foliar segments, elongated, mainly lanceolate, the terminal ones decurrent on the petiole and often merged at the base (connate). The fruits are 6-8 mm long and (4,5) 5-6 mm broad.

A much known species, more prized than the sylvestris for the herbal, culinary and liqueur use is the Angelica archangelica known as Garden angelica or Norwegian angelica; it differs due to the green stems, the cylindrical foliar petioles, the white-yellowish or greenish petals, the fruits having corky wings and the rays of the inflorescences arranged in way that the same presents globose or almost as such. It is a species with circum-boreal-arctic range but which, thanks to the cultivation (diffused especially in France, Germany, Poland, Czechoslovakia and North Europe), in some zones of the Alps it has, sometimes, become sub-spontaneous. It s employed for the preparation of several liqueurs, such as the Chartreuse, the Bénédictine, the Anisette, the Strega, the Petrus Boonekamp, and also: in the Carmelite water done by the Carmelites, in the Vespetrò, in the amaros and in the Turin Vermouth. 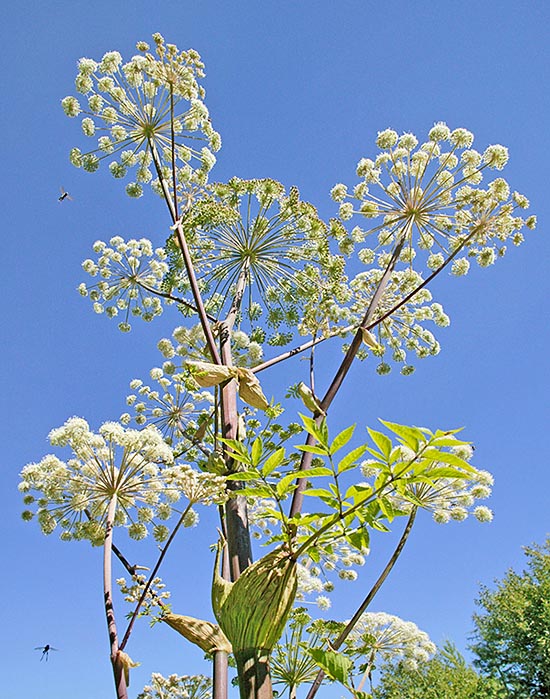 Fruits and roots have medicinal virtues, but is unadvised for ulcers and tans © Giuseppe Mazza

The wild angelica has remarkable stimulant properties for the hepatopancreatic secretions and alleviates the painful spasms due to the formation of intestinal gasses, as well as appetising, digestive and eupeptic, carminative, diuretic, expectorant, antispasmodic and emmenagogic. It is employed for the preparation of eupeptic bitters with direct mechanism, with action on the gastric glands.

The extract of the root stands in the composition of sedative waters and digestive liqueurs; fights stomach acidity, the gastric atonia and aerophagy. He who suffers from inappetence, anorexia, meteorism, dyspepsias and has digestive problems will find in this herb a sure relief.

It is contraindicated for the persons suffering from gastric and duodenal ulcer and it is suggested not to expose long time to solar radiations during the utilizations of preparations with angelica (the furocoumarins may cause allergies and burns to the skin).

Some preparations made from bergapten, xanthotoxin and other coumarins are utilized in the treatment of the psoriasis.

The powder obtained by grinding the seeds is effective against the lice. In Greenland, Finland and in Sweden, the wild angelica is used the same way as cooked vegetables and many cakes of those countries are aromatized with its fruits; the foliar petioles and the young hollow stems are chopped and candied.

In summer, the elegant flowered umbels of the wild angelicas attract countless insects and emanate a gentle scent. The characters to be kept in mind for not mistaking it with toxic or irritant umbellifers, such as the hemlock (Conium maculatum) or the hogweed (Heracleum sphondylium), are: its pleasant scent, the absence of thick small brown-purple small dots on the stems and the presence of the typical enveloping large sheaths at the base of the petioles.

Digestive infusion good in the cases of gastric atonia, acidity and stomach swellings

Two teaspoons of chopped rhizome in a cup of boiling water. Leave in infusion for twenty minutes and drink one hour after the meals sweetening with some honey.

Leave to macerate for three days one handful of chopped root and a pinch of seeds in one litre of full-bodied red wine shaking every now and then. After filtering, to drink a small glass before the meals.