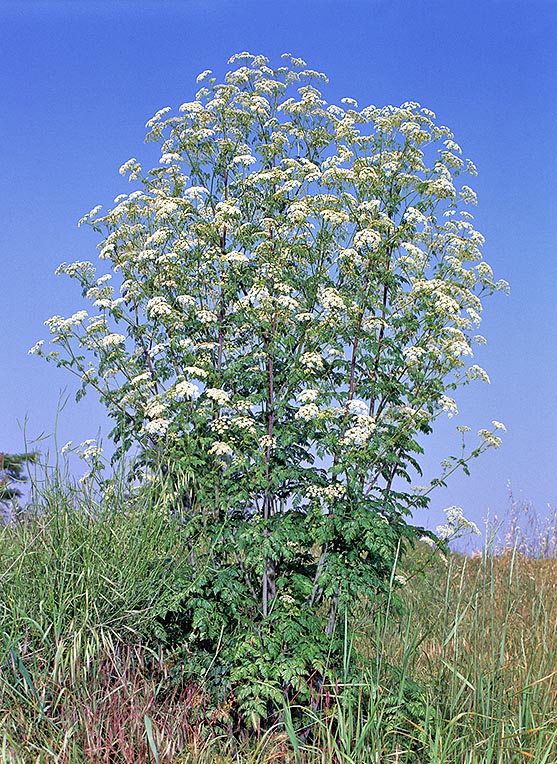 The term “conium” comes from the Greek “coneion” (κωνειον), indicating the hemlock, maybe related to the term “konas” (κωνας), vertigo. The name of the species maculatum (Latin for maculate) refers to the maculae present on the stem.

For this plant, the Romans did use the name of Cicuta, whilst in the Middle Ages, in northern Europe, with this name they indicated another poisonous apiaceous, Cicuta virosa, which does not exist in the south (in Italy it is present only in Lombardy, Trentino and South Tyrol and in Veneto).

It is an imposing, biennial herbaceous plant, characteristic for the penetrating and unpleasant smell, described as similar to that of a cat’s urine, evident especially when shattered.

During the first year it usually produces only leaves. The erect stem, which usually appears on the second year, is up to more than two metres tall, hollow, striated in surface and with numerous red-brown spots or striations, generally ramified especially upward.

The leaves are alternate, up to about 50 cm of size, compound, with triangular contour hem, strongly subdivided (tripinnatesect), with toothed margin, with a robust petiole similar to the stem, expanded at the base for sheathing the stem.

The flowers appear on the second year in great umbels composed by numerous (10-20) umbellets. Calyx with five sepals merged at the base. Corolla with five oval, white petals. The 2-3 mm fruit is globose, with evident undulated ribs.

Plant of Euro-Asian distribution, grows all over Italy, from the sea level up to about 1800 m of altitude. It loves grassy, shady, locations and ruins, often close to water streams, in sols rich of nitrogen (nitrophilous). The hemlock has acclimatized in North America, where is considered as a weed. The blooming takes place from April to August.

The hemlock is often considered as the poisonous plant par excellence. Actually, the whole plant contains toxic alkaloids, the main of which is the coniine. The content is at its maximum in the fruits, which can contain up to 2 g of alkaloid per 100 g, and minimum in the stem and the roots. The fatal dose for the man is of few grams of fruits.

The hemlock is toxic also for the cattle, which often refuses it even if there are not rare cases of serious intoxications. The plant is not toxic for many birds. It has been noted that, for still unknown reasons, the animals having been intoxicated with hemlock, if they survive, often tend to eat it again. In the grazing animals which have ingested hemlock, the toxins can move into the milk, with potential danger. 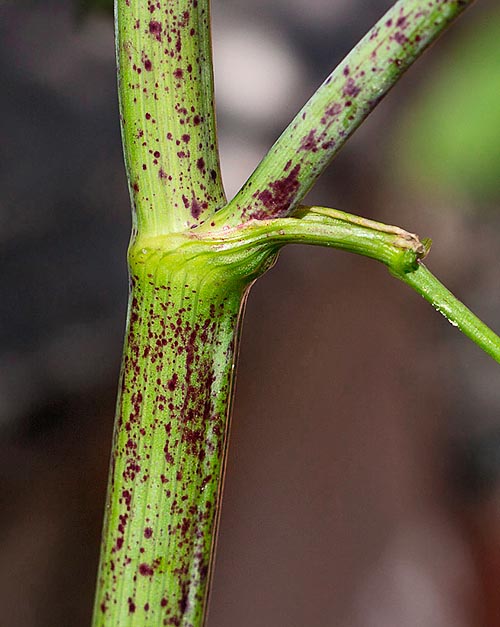 Typical is the stem with rust red spots and petioles sheathing at the base © G. Venturini

The hemlock is teratogenic for the cattle: the pregnant females having eaten it are exposed to deliver malformed progeny, in particular with palatoschisis (cleft palate) and congenital muscular contractures. The coniine develops its main toxic action on the nervous system, acting in particular on the neuromuscular synapses. The alkaloids joins the receptors for the acetylcholine, the neurotransmitter active in these synapses, and blocks them, hindering therefore the stimulation of the muscle fibres and causing a flaccid paralysis. The primary effect is that on the muscles of the respiration and so the result stands in a potentially fatal respiratory paralysis. The action is therefore similar to that done by the curare. The symptoms of the intoxication initially manifest with dryness of the mouth, swallowing difficulty, nausea and weakness of the limbs, vomit, tremors, rapid breathing, tachycardia, loss of urine and convulsions. With high dosages, the muscular paralysis appears and then possible death due to respiratory arrest and resulting asphyxia. The intoxicated person keeps conscious.

Quite recently it has been observed that in the hemlock intoxications occur also serious muscular damages, with destruction of the muscular fibres (rhabdomyolysis) and serious renal lesions, such to lead to the renal failure. The coniine may be also absorbed through the skin.

Treatment of the hemlock intoxications

The treatment is symptomatic only, as no antidotes are known. If the symptoms of paralysis occur, it is indispensable to provide artificial respiration, in way to prevent death by asphyxiation. The toxicity of the Cicuta virosa is due to a different substance, the cicutoxin, a neurotoxin acting on the receptors for the neurotransmitter GABA (gamma aminobutyric acid), differently than from the coniine.

The hemlock intoxication may be caused by the ingestion of parts of the plant, erroneously mistaken with other edible species (leaves mistaken as parsley, anise seeds), even if the disgusting odour limits the edible use of the raw plant.

It is said that the desiccation or the cooking decrease the toxicity, but this is not true. Some cases of poisoning have verified in children who had built up some blowpipes or some whistles with the hollow stem of the plant.

A particular type of intoxication, called coturnism (Coturnix is the Latin name of the quail Coturnix coturnix), is due to the ingestion of birds having ingested hemlock. Quails, larks, thrushes or other birds, hunted in spring, may have eaten fruits or buds of hemlock, and the poison, to which they are not sensitive, accumulates in the internal organs.

In particular, this happens if they have not taken off parts such as the gizzard of the birds. In Italy, have occurred various cases especially during the eighties. The symptoms consist in muscular weakness, pain at the extremities, nausea and vomit, accompanied by muscular damages (rhabdomyolysis, which is destruction of the muscular fibres) and renal damages up to the renal insufficiency. The death may come due to respiratory paralysis. Recently has been isolated a new alkaloid of the hemlock, the conmaculatine, having analgesic activity, but highly toxic. 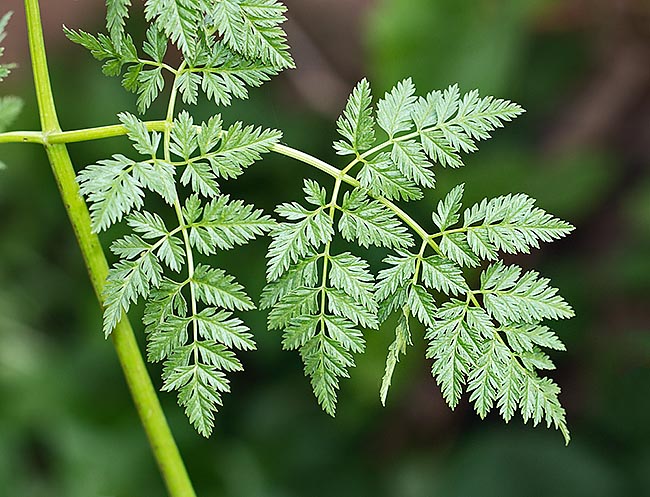 The leaves can even be 50 cm. They have strong odour, unpleasant recalling cat's urine © Giorgio Venturini

Historical and archaeological studies have shown that, by the middle of the thirteenth century, two young people have been mortally poisoned by the fumes emitted from hemlock contaminated incense during a religious ceremony.

Hemlock has been used since yore as sedative and as antispastic. The physicians of the old Greece recommended it for various ailments, amongst which the arthritis.

Romans did use the hemlock for medical purposes for the affections of the skin or of the liver and of the nervous system, besides for the cancer and for excessive sexual libido.

In the Middle Ages a mix of hemlock, betony Stachys officinalis and seeds of fennel was considered as a medicine for the bite of rabid dogs. Seen its inhibiting action on the muscular contraction the hemlock has been considered as a remedy for the cases of epilepsy and of muscles spasms. It has also been suggested its use as treatment against the scrofula (tubercular adenitis). Castor Durante, in ‘500, against the erotic fantasies suggests applying on the testicles a poultice gotten from leaves of hemlock. In the past, it has been utilized as antidote for the strychnine poisoning or in the treatment of tetanus. The low therapeutic interval, that is the difference between the therapeutic doses and the toxic ones, has led to its gradual disuse. In the homeopathic medicine, hemlock preparations are suggested for the treatment of various pathologies, such as vertigo, headache, eyes problems, menstrual, urinary and sexual problems, prostatic hypertrophy, cysts, cancer or nervous problems.

The old Greeks used the hemlock as poison for the capital executions of criminals. Plato, in the Phaedo, describes the last moments of Socrates, condemned to drink the hemlock for corrupting the young and for having neglected the gods.

“You, my good man that you are acquainted with these things, what then should be done?” Socrates asks the man who has carried the bowl with the hemlock. And that one, handing the bowl: “nothing else than to drink and then pace a little the room until when you feel the legs heavy; then stretch out and so it will make its effect.” Socrates emptied it without drawing breath… went a little up and down the room, then said that he was feeling the legs getting heavy and so lied down as told him by the poison man who, the meantime, touching him did examine the legs and the feet and all of a sudden, pressed strongly a foot asking him if it was aching. Socrates replied negatively. After a while, the man touched him the legs and then, going up slowly, more and more up, showing how he was getting cold and stiff. Then, while going on in touching him said: “When it will reach the heart, then all will be over.” He was already cold up to the abdomen… and these were his last words: “Crito, we owe a cock to Asclepius, give it to him, do not forget.” After a while he drew a
gasp. The man discovered him: he had the eyes fixed. Seeing him, Crito closed his lips and his eyes. 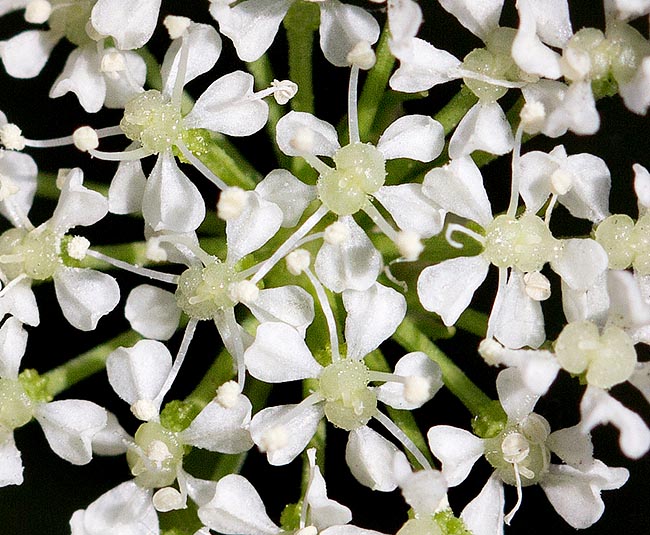 The symptoms described by Plato do not correspond to those of a hemlock poisoning; it is possible that the potion used for the capital executions contained a mix of various poisons, but, overall, we must think that Plato was not present at his teacher’s death and also that for him, his pupil, the end of a wise and beloved philosopher like Socrates could not happen if not in a dignified and composed way. The phrase of the cock for Asclepius divides the commentators, who have given the most different interpretations.

Less known, but very interesting, is the case of the death sentence with hemlock of Phocion (318 BC), Athenian politician and military. (Phocion was called “The Good” and was known for his honesty; maybe they condemned him rightly for this?). Pluto refers that the dose of hemlock prepared resulted insufficient, but the executioner refused to prepare another, except upon payment of 12 drachmas. Phocion himself had to pay, asking the money to his friends (it is estimated that the value of one drachma was that of the daily wage of a worker, it was therefore matter of quite an expensive execution).

Seneca, the writer and philosopher tutor of Nero, accused of having participated to a conspiracy against the Emperor, was ordered to take off his own life. He slashed his wrists, and then did cut the veins of his legs, but seen that the blood did not get out sufficiently, ingested the hemlock. Not happy with this, he immersed in a pool of warm water to facilitate the flux of the blood and, finally, as it would seem, died suffocated by the fumes. It was also said that, in a book written by an anonymous author published in Turin in 1870 that Cavour did pass away poisoned by the hemlock, following a plot organized by Napoleon III.

An old English legend narrates that the spots present on the stem of the hemlock do represent the mark placed on Cain’s front after the killing of his brother Abel. Considered as a magic plant, the hemlock was associated to the black magic.
Shakespeare cites the hemlock in the King Lear and, in the Macbeth, provides the recipe of the magic potion as prepared by the witches:

“… Scale of dragon, tooth of wolf, witches’ mummy, maw and gulf of the ravined salt-sea shark, Root of the hemlock, digged i’th’ dark; Liver of blaspheming Jew… To cool with baboon’s blood: Thus the spell will be ready and sure.”