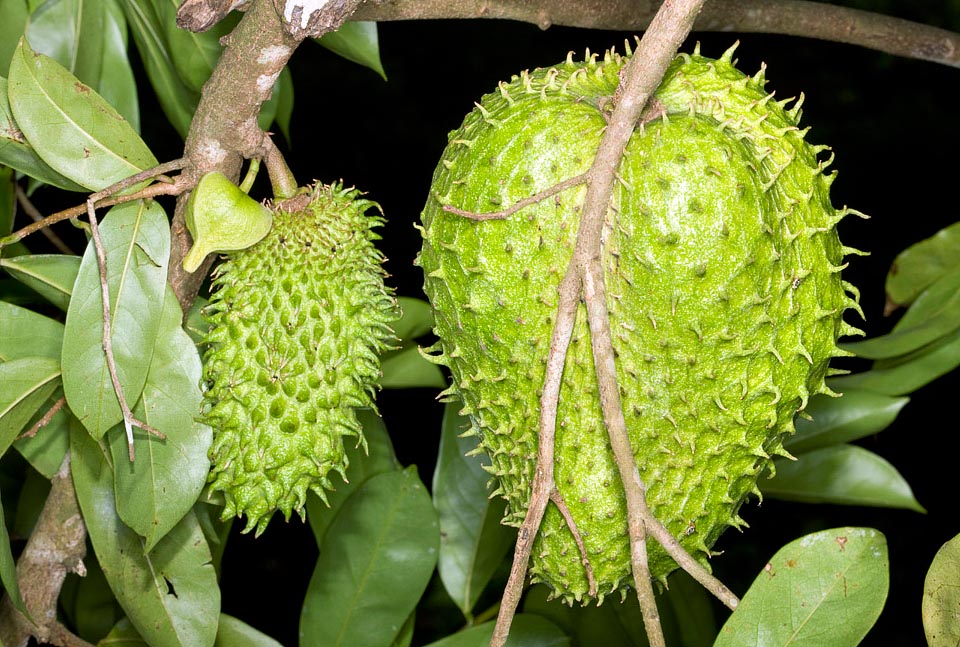 The Annona muricata L. (1753), cultivated since remote times, is probably native to Central and tropical South America, and the Caribbean.

The name of the genus comes, after some, from the Latin “annona” = nourishment, food, referring to the alimentary utilization of the fruits, after others, from its local name (in Taino language); the name of the species comes from the Latin “murex” = murex, with which were generically called two molluscs (Murex trunculus and Murex brandaris), with the shell covered by thorns, from which the purple was obtained, with reference to the fruit covered by tubercles. 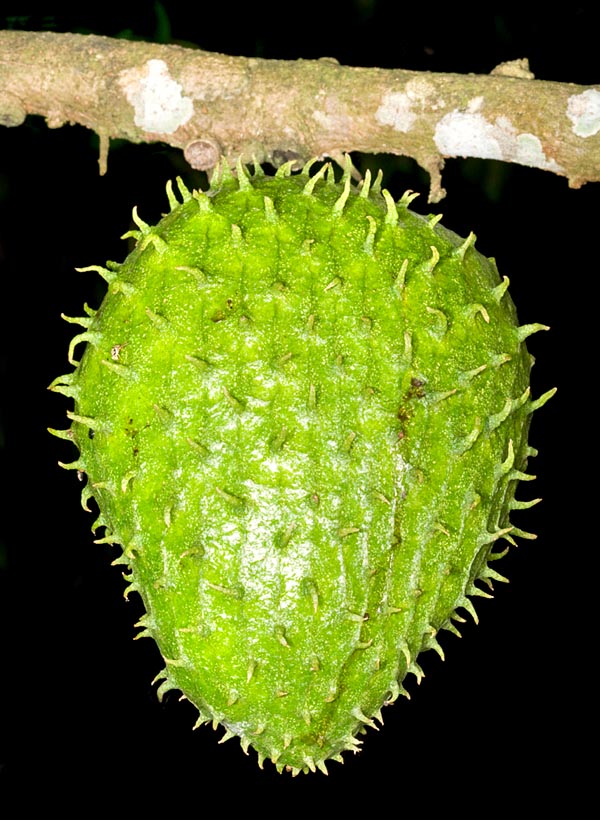 Not much ramified, evergreen tree, which can reach a height of 5-6 m, with oblong, or obovate, leaves, 8-15 cm long and 3-6 cm broad, of a glossy dark green colour on the upper page, and pale green on the inferior one, with a rather unpleasant smell.

The flowers, usually single or coupled, come out from the trunk or the branches, and are about 4 cm long, with three pulpy, greenish yellow, outer petals, and three smaller, pale yellow, inner ones.

The fruits are syncarps (a whole of more fruits, simple, growing up at the same time, to form an apparently unique fruit), ovoid, or of irregular shape, long up to 30 cm, of a dark green colour tending to the yellowish green when ripe, covered by soft, bent, thorns, and can weigh even more than 6 kg; the pulp is white, juicy, with a more or less sour taste and with a smell which recalls the pineapple, containing several elliptic, compressed, black seeds, long about 15 mm.

It usually reproduces by seed, which germinates in 2-4 weeks, the selected varieties, by cutting or grafting.

The plant is fundamentally tropical for what the temperature is concerned, adult specimen can lose the leaves or the aerial part already with temperatures around the 0 °C; the best exposition is in full sun and normally it is cultivated in sandy, acid or neutral soils. From the fruit, which can be conserved only for a few days, only the pulp and the juice are consumed, the last being utilized as such of for preparing drinks and ice-creams. All the parts of the plant, already amply utilized in the traditional medicine, contain several bio-active substances of remarkable interest in various fields of the medicine; the leaves contain, among other things, acetogenins, substances under study nowadays doe presumed anti-tumoral properties.