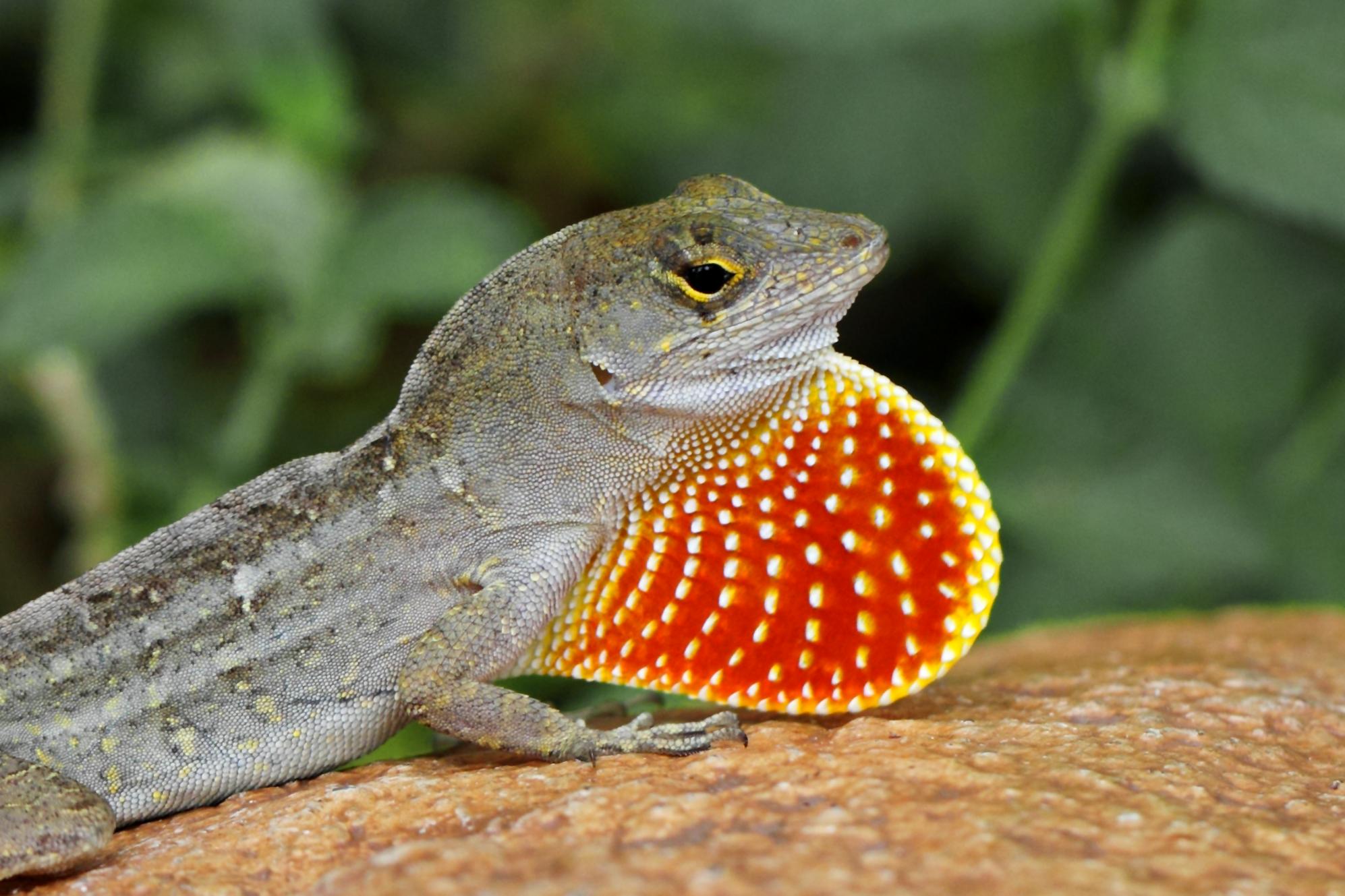 The term “Anolis” has been introduced in the XVIII century reutilizing the Caribbean terms “Anoli” and “Anoalli”. Conversely, the specific epithet “sagrei” has been chosen in honour of the Spanish botanist and politician Ramon de la Sagra, professor of Natural History in Cuba and activist in Spain and in France.

Anolis sagrei  is native to Cuba and the Caribbean including the Bahamas and their satellite islands. It has been introduced in Jamaica and in the Cayman Islands. Later, also in Mexico where it has formed stable populations in the Yucatan Peninsula, in Florida, in some areas of Texas, in Hawaii and in Taiwan. Its ample diffusion and the capacity to adapt also to anthropized environments are the reason why presently the IUCN Red List classifies it as least-concern, not identifying any threat to its conservation. In the areas where it has been introduced it is even considered as an invasive species. 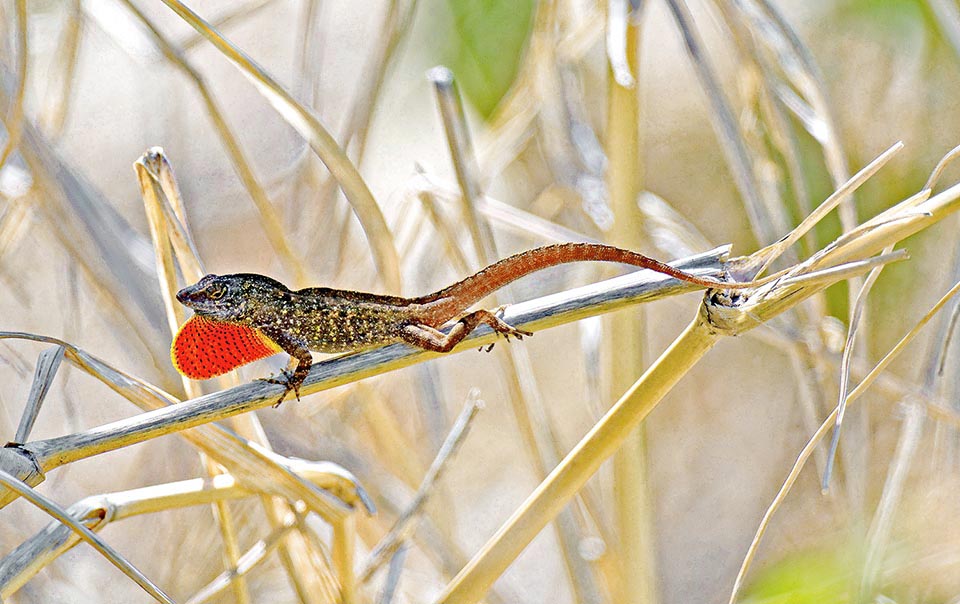 The males, longer than the females, reach the 21 cm. Besides the much greater red jugular sac they have an erectile dorsal crest © Uwe Speck

The average length is of about 12 cm (muzzle-cloaca 5 cm) with male specimens that may reach 21 cm, whilst the females do not exceed 15 cm. The muzzle is short and the fingers have well developed finger pads for climbing trunks and branches.

The livery varies depending on the population and on the zone. Basically, the specimens have a brown-grey shade with a pattern of white and yellow colour on the back.

Like other species of Anolis, A. sagrei can vary the colour of its livery, passing from lighter to darker shades depending on the stimuli and the ambient temperature. Usually, the darker tones are associated with lower temperatures or appear during the defense of own territory as part of the display towards conspecifics.

Both sexes have a jugular sac of red or orange colour with a white edge, however in the males it is remarkably bigger. The jugular sac stretches through the movements of the elements of the hyoid apparatus and is utilized to attract the females, or to scare potential predators, or as a signal for communicating with the conspecifics. 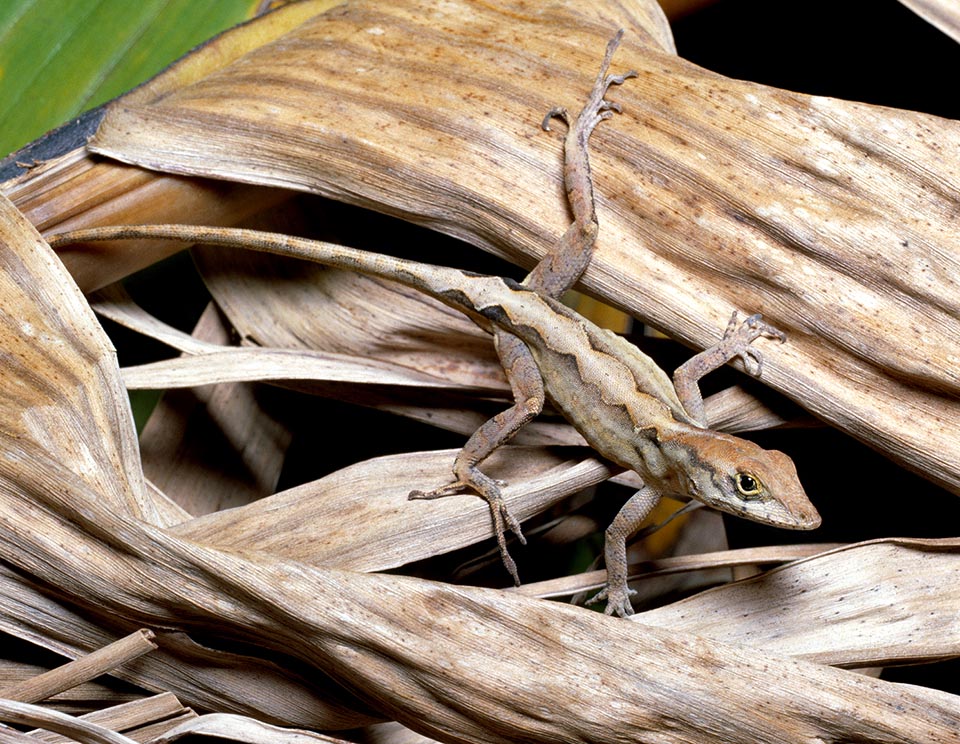 Conversely in females we often note a zigzagging mimetic pattern with marked pale dorsal line. In the warm and humid months, they can la one egg every 14 days © Giuseppe Mazza

In the males, the signals of the jugular sac can be accompanied by the erection of a dorsal crest that happens by means of a vasodilation to allow the entry of fluid into the crest. At times the crest may extend also along the tail, but this trait varies a lot from individual to individual.

The females do not have the crest and instead they display a marked dorsal clear line, much more visible than on the males.

Anolis sagrei is a generalist species in terms of habitat and adapts also to anthropized and suburban environments. It prefers humid areas with open vegetation. Normally, it is found on the soil, but it is capable of proceeding up on the trees and on the shrubs.

The great adaptability of this species is confirmed by the possibility of changing own preferences in terms of habitat relative to context and to the threats it meets. For instance, it has been noted that in some determinate areas, the introduction of a predatory saurian like Leiocephalus carinatus, has brought A. sagrei to move from the open areas to more vegetated ones, occupying more elevated positions in order to avoid the predation. 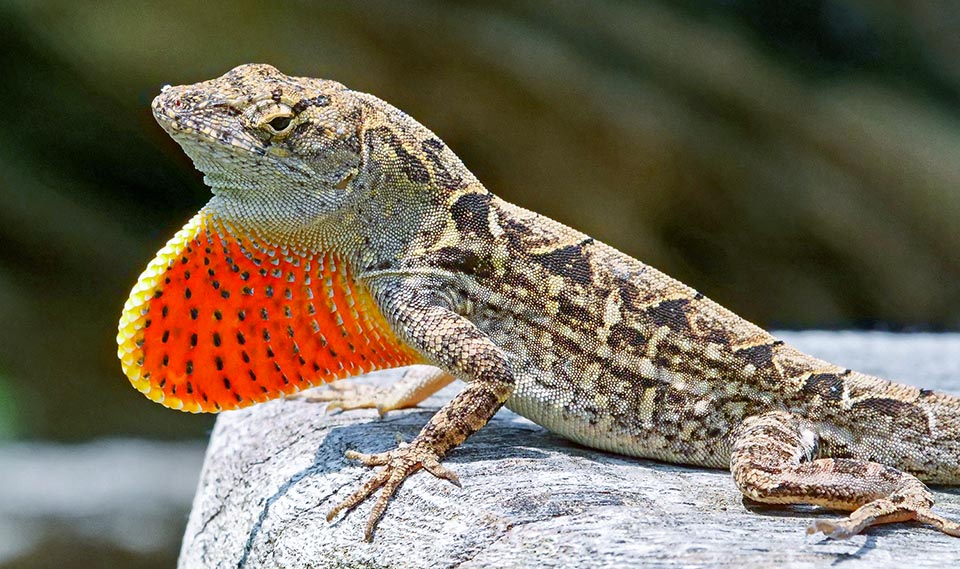 The courting is characterized by very marked visual signals. The males extend at different intervals the jugular sac, move the head, and create a pulsating motion by flexing the limbs. Generally, females prefer the individuals having an ampler and intensely coloured jugular sac, clear sign of strength and finally of good health © Kristy L. Baker

Anolis sagrei is diurnal and active in the days with mild and warm temperatures that, considering its geographical distribution, occupy most of the year. During these days it can be seen while thermoregulating, basking, on the vegetation or the rocks.

In the coldest or adverse weather days, it tends to hide under fallen trunks, bark or other shelters that may be even occupied by other individuals at the same time.

The diet of Anolis sagrei is composed by insects, arachnids and other invertebrates. However, it can occasionally also predate small vertebrates.

Anolis sagrei is oviparous and the female, during the warmest and humid days, lays round eggs in succession when the soil is humid or close to rotting wood at intervals of about 14 days. 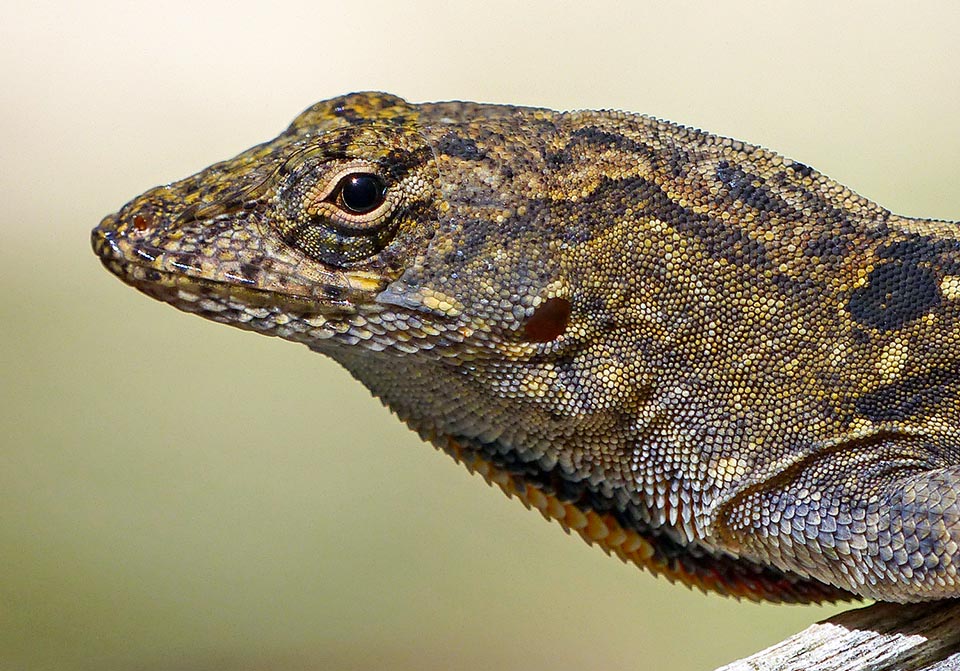 Anolis sagrei diet is formed mainly by insects, arachnids and other invertebrates, but sometimes it can predate even small vertebrates. The livery of this species is extremely changeable. Generally the darker shades are associated to lower temperatures or appear during the defense of the territory as part of the display towards the conspecifics © Simon Marshall

The courting is characterized by very marked visual signals. The males extend the jugular sac at different intervals, move the head (head-bobbing) and make a pulsating movement by flexing the limbs. The rôle of the jugular sac is very important for increasing their own visibility towards the female, so much that in the most part of the populations are awarded and selected the individuals having the amplest and most coloured sacs.

In the areas where more predators are present, the courting is less marked, is done from higher areas and the morphological selected traits represent a compromise between the necessity of attracting the partner and of limiting the visibility to avoid the predators.