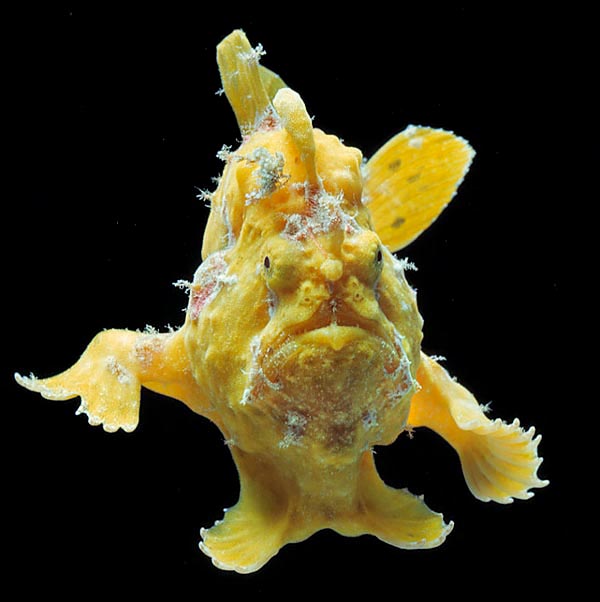 An ET? A nightmare? No, it’s only a swimming Antennarius pictus © Giuseppe Mazza

The Painted frogfish (Antennarius pictus Shaw, 1794) belongs to the class of Actinopterygii, the ray-finned fishes, to the unusual order of Lophiiformes and to the family of the Antennariidae, mainly present in the tropical and subtropical seas with about fifty species.

The name of the genus comes from the Latin “antenna” = antenna, flagpole, with reference to the fishing rod, called illicium, it has on the head.

The Latin name of the species “pictus” = painted, colourful, streaked, refers to the showy livery.

It has a very vast distribution in the tropical waters of the Indo-Pacific.

Indicatively, we find it from South Africa, Madagascar and East Africa up to the Red Sea and the Arabic Sea, then at the Seychelles, the Maldives, in India, Sri Lanka, Cocos Island, in Indonesia, Australia, New Guinea, Palau, Philippines, Taiwan and in the southern part of Japan. Eastward, it has gone northwards up to the Marshall and Hawaii islands and southward up to the Society Islands, after having colonized New Caledonia and Tonga.

It is a benthic species which moves around among the corals in relatively shallow and calm waters, usually around the 15 m of depth, but it has been sighted even at 75 m along the outer part of the reefs. It spends most of the day motionless, idly digesting the preys among the colourful corals and the sponges, which it perfectly imitates passing unobserved. 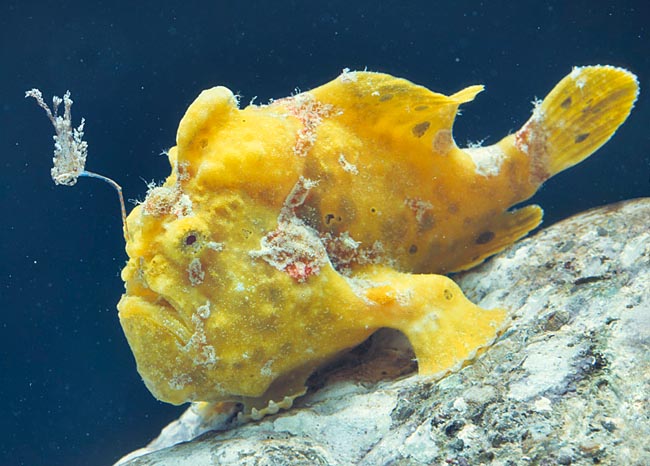 Massive, with an outline to say the least, unusual, and an almost roundish look, the Antennarius pictus can reach the length of 30 cm.

The skin, rich in protuberances and without scales, can be red, yellow, green, brown, grey or black, with spots, according to the cases, red, brown or grey which imitate the oscula and the chiaroscuro of the sponges.

On the back, over the mouth, we note a spiny ray transformed in a mobile filament, the famous illicium, ending in a tufty bait for attracting the attention of the preys.

Then come two spiny rays, invisible because under the skin, forming a small hump, and, finally, we see a more traditional fin composed by 12-13 soft rays.

The mouth, pointing upwards, is enormous with longer inferior jaw. Inside, we note some thin teeth, arranged one close to the other like a brush. The branchial opening, like in the morays, is reduced to a simple hole, well disguised, at the base of the pectoral fins.

It’s the illicium it moves like a worm to draw attention. In 1/10.000 of second the protractile mouth opens sucking the ill-fated © Giuseppe Mazza

It is a very greedy fish, cannibal at times, which does not hesitate in swallowing preys having its same size. Perfectly camouflaged among the sponges and the corals, covered as it is by excrescences, it really looks like a sponge or a rock rich of encrustations. It keeps motionless and when it sees a fish approaching moves up and down the illicium to arouse its curiosity. 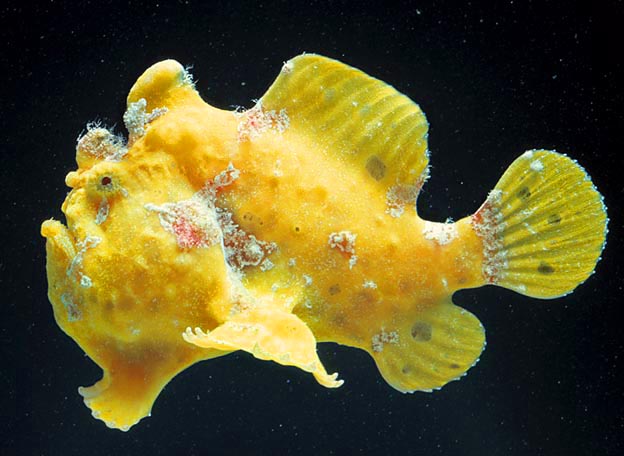 The much variable colour has created many synonyms. The spots imitate the sponges ocula © Giuseppe Mazza

The one who was perhaps looking for a small worm gets closer and is suddenly aspirated by an enormous protractile mouth which springs forward opening in a ten-thousandth of a second. The depression is such that the ill-fated, without even realizing, finds itself in the darkness in the stomach.

As we can easily guess from its surely non-aerodynamic size, the Antennarius pictus is a very poor swimmer. It moves ahead walking on the fins with small flcks, but, in case of danger, it can swim for long time with powerful movements of the tail.

For mating, the spouses get up to the surface where the female spawns thousands of eggs united in floating cords which are fecundated on the fly and then entrusted to the currents.

They hatch after a few days and the planktonic larvae go drifting for 1-2 months before metamorphosizing and reaching the bottom where, in the early days, the young are mistaken for nudibranchs.

The populations can double in less than 15 months and the vulnerability index, 16 over 100, is presently very low.