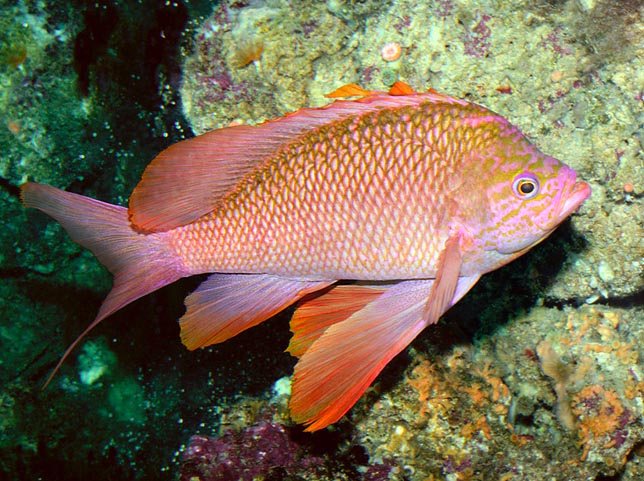 The Swallowtail seaperch (Anthias anthias Linnaeus, 1758), in Italian “Castagnola rossa” = red damsel, belongs to the class of the Actinopterygii, the ray-finned fishes, to the great order of Perciformes and to the Serranidae family.

The name of the genus and of the species has distant origins. It seems that it had been given by Aristotle to a mythical lucky charm fish, which was ensuring the safety of the fishermen. Whence, the synonym of Anthias sacer, shown below, and given by Bloch to the species in 1792, to emphasize, with the term “sacred”, this ancient belief. For sure, in spite of the Italian name, it is not akin to the well known Damsel (Chromis chromis) in Italian “Castagnola”, belonging, on the contrary, to the family of the Pomacentrids.

The swallowtail seaperch is at home in most of the Mediterranean, but the Black Sea. Beyond Gibraltar Strait, we find it, northward, along the Spanish, Portuguese, French and English Atlantic coasts, and, southward, beyond the Acores and the Canary Islands, up to Angola.

This fish loves the darkness. It lives among the corals in grottoes at 30-50m of depth, but it seems having been seen also at 300 m.

Relatively high and compressed, it may reach, tail included, the 25 cm of length. The mouth is large and oblique, as a predator, with the inferior jaw slightly longer. The numerous teeth, present also on the vomer and on the palate, are tiny, but also caniniform. The biggest ones, conical, sharp and protruding for seizing the preys, are obviously placed around the jaws, 2 in front, on the upper one, and 4 or 6 under, on the lower one. 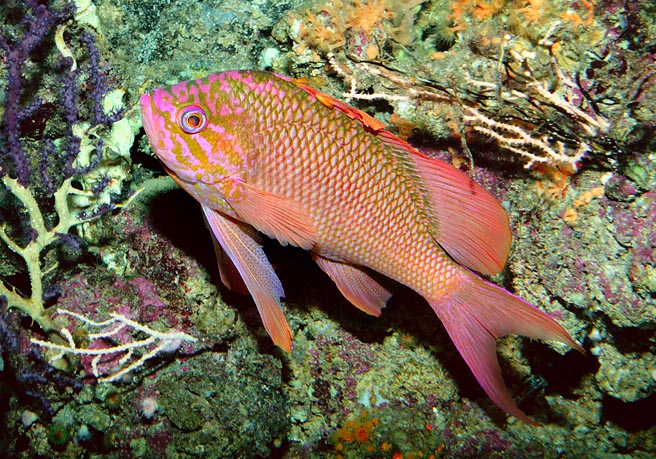 The preoperculum is denticulate down below and the operculum has three spines, one of which is blunt, in the back area. The dorsal fin, spiny at the front, is much higher in the second part, sail-like, with soft rays. So far, nothing strange, as it is a scheme we often find in the fishes, but, it’s the third, spiny ray which renders unmistakable the whole, as it is almost three times higher than the second one. Also the ventral fins, are truly unique, sharp and of huge size if compared to the norm. The anal one, well developed, makes its figure, whilst the pectorals appear, in comparison, modest.

The swallowtail seaperch goes hunting, especially during the night, small fishes, without neglecting the crustaceans. It usually lives in schools, formed by a ten of individuals. It is mainly matter of a dominant male with its harem. When it passes away, seen that it is matter of a protogynous hermaphroditic species, the oldest female, that has now learned what to do, takes its place and changes of sex.

The reproduction takes place in spring, and in autumn the newborns reach the size of 5-8 mm. It settles well in suitable aquaria and may live for years. The vulnerability index of this species is of 38 over 100.