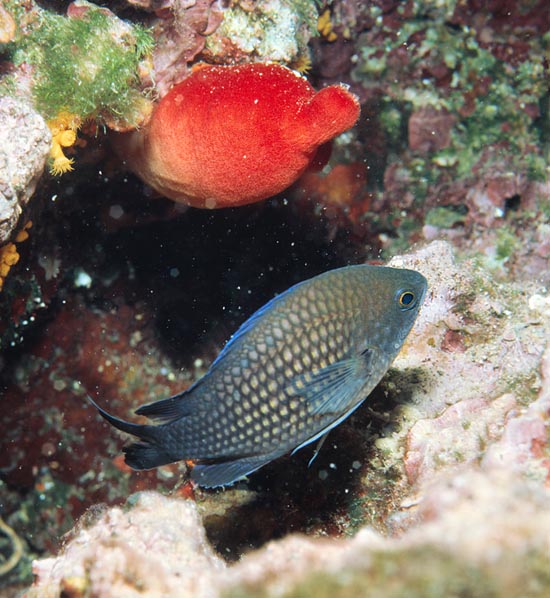 Chromis chromis in its habitat. Above, a Halocynthis papillosa © Giuseppe Mazza

The Damselfish (Chromis chromis Linnaeus, 1758) is a small sea fish afferent to the class of the Actinopterygii, to the order of Perciformes, to the family of Pomacentridae and to genus Chromis.

The damselfish is the only European member of the family.

The members of this family include several tropical species, plus the damselfish which lives in our waters. These fishes, as well as the other species, are not caught because their fleshes are spiny and of poor gastronomic quality.

The damselfish is diffused, in addition to the Mediterranean also in the eastern Atlantic; a species similar to the Chromis chromis, the Chromis cyanea, where also the adults have a nice clear blue colouration, is present in the Atlantic and is absent in our seas, whilst the Chromis viridis is found in the Indian Ocean, the Pacific and in the Red Sea.

The males, in vast schools, populate the bottoms rich of stones; each one takes possession of a quite restricted zone, where a stone is located and defends it against possible intruders devoting to it much attention. The female comes only at a later stage.

The Pomacentrids are closely biologically related with the wrasses, to which they have in common the presence of a pharyngeal tooth and the dorsal fin with spiny rays; however, they differ from them for their smaller size and the normal lops, instead of being big, protruding and fleshy. The body of the damselfish, like the other members of the family, is high and convex, both top and bottom, is covered by cycloidal scales rather big.

The damselfish is a small fish which does not exceed the 12 cm of length. It diversifies from the other species of the Italian seas because of the livery, which, in the adults, is brown-blackish, whilst in the sub-adults it is uniformly bluish with longer and more fluctuating fns. There is sexual dimorphism.

During the time of coupling, which takes place in July, the damselfishes manifest strange habits: the males, much territorial, take possession of a restricted area in the bottom, where is located a stone, and the female, which comes later on, lays there its eggs, anchored by means of filaments, and then they will be fecundated. During the other periods of the year, these fishes go around in shoals close to coast as well as offshore, and frequent the banks of weeds, nourishing, exclusively, of plankton. Presently the IUCN identifies its status as “non vulnerable”. The vulnerability index of this species is of 35 over 100.