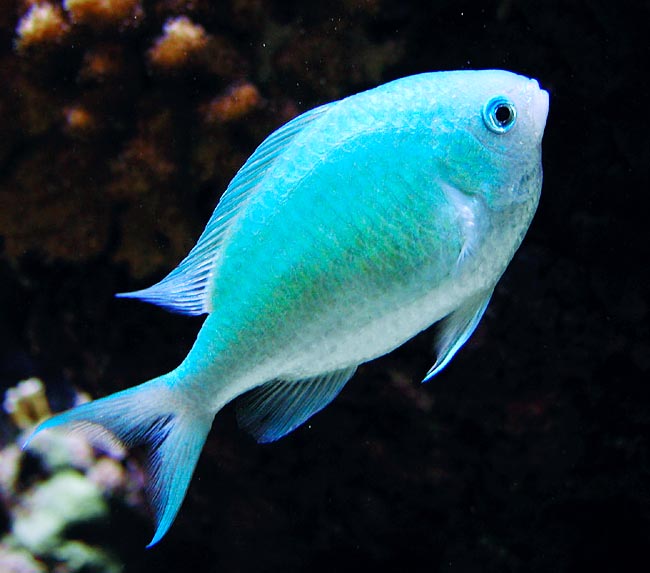 The Green chromis (Chromis viridis) is common in Indopacific on madrepores of the genus Acropora © G. Mazza

The Blue green damselfish or Green chromis (Chromis viridis Cuvier, 1830), belongs to the class of the Actinopterygii, the ray-finned fishes, to the order of Perciformes and to the family of Pomacentridae, which counts about thirty genera and almost 400 species, practically all tropical, but rare exceptions such as our Damselfish (Chromis chromis) of the Mediterranean.

The name of the genus is that of a not well identified fish cited by Aristotle and assigned, as we have seen, by Linnaeus to our damselfish. A successful genus, which has about 95 species, about one fourth of all combined species of Pomacentridae.

The name of the species, “viridis” = green in Latin, is, on the contrary, unambiguous.

We find it, indicatively, from East Africa and Madagascar to the Red Sea, the Seychelles, Mauritius, Réunion, the Maldives, India, Sri Lanka, Australia, Indonesia, Micronesia, New Guinea, Palau, the Philippines, Taiwan, China and in the islands of Ogasawara and Ryukyu in the southern part of Japan. Eastward, it has colonized the Fiji Islands, Samoa, Tonga, Kiribati, Tuamotu and Pitcairn, which represent also the southern limit in the Pacific after the Great Barrier Reef and New Caledonia.

It lives in the lagoons, but also on the outer side of the reefs, in relatively calm and shallow waters up to about 12 m of depth. It s strictly linked to the madrepores, especially those belonging to the genus Acropora, next to which it swims, in small schools, ready to disappear among the branches at the least sign of danger. It does not love the dead corals, and therefore avoids the degraded zones. 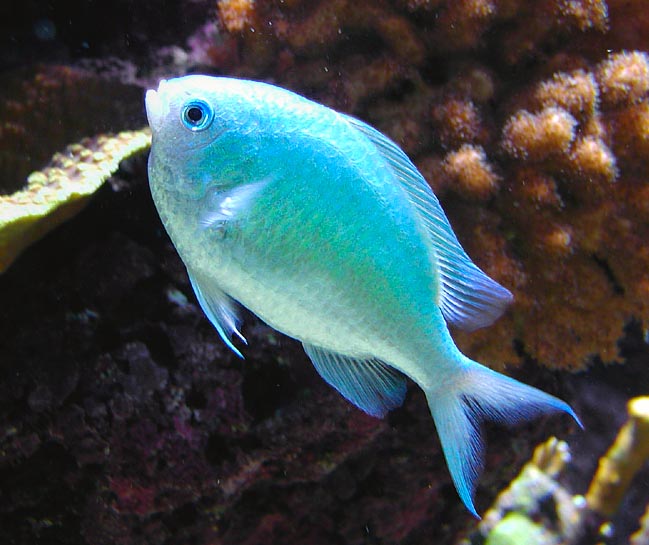 Omnivorous, it eats plankton, by suction or with sudden movements of its protractile mouth © Giuseppe Mazza

The protractile mouth is armed with caniniform teeth. The eyes are relatively large. But what is more striking is the bright blue turquoise livery, with electrical shades, changing unabated between the green and the blue depending on the inclination of the light. The abdomen is paler, at times with yellowish hues.

The blue green damselfish is omnivorous. It nourishes of phytoplankton and of zooplankton. It quietly sucks the algae, the eggs and the larvae of fish carried by the currents, but for the faster organism, like the crustaceans, which might run away, extends and closes the mouth with the speed of a lightning, in a few thousandths of a second.

The marriages are a pair matter, but they take place grouped. The males chose for the nest, a small dimple dug in the sand, the dead branch of madrepora or simply, one hospitable seaweed. Then they dance, moving up and down, like if they were jumping inside a virtual column of water, for attracting the attention of the females and show the competitors that is their place.

The female enters the column for a synchronized dance, but does not spawn immediately. Only later on, when they are well together, it fixes the eggs to the substratum in the indicated place and the male fecundates them. Once the ceremony is over, it comes back to the every day life, whilst the male tries to attract another female. When the nest is overflowing of eggs, about half a millimetre wide, it calms down and keeps watch for 2-3 days, till the hatching, ventilating them and eating the non fecundated ones which are getting rotten.

The larvae, about 2 mm long, carry on pelagic life for 3-4 weeks. Then the juveniles, led by the olfactory signals emitted by the available madrepores, colonize them, sheltering at the centre of their ramifications. When they go up they find more plankton risking being predated, but if they keep low, where there is little current and the coral polyps have already done the lion’s share, they risk dying starving.

The resilience of the species is good, seen that the members can double in less than 15 months, and the vulnerability index is surely low: only 21 on a scale of 100.