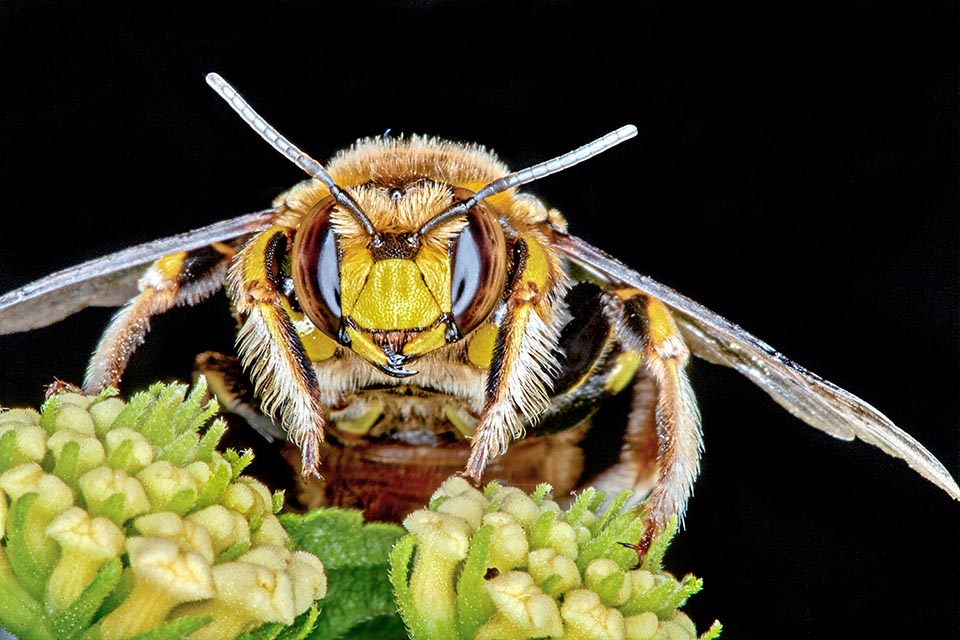 Anthidium florentinum is a species of solitary bee of the family Megachilidae. This taxon stands out for its rather stocky appearance and for the presence, in the females, of a ventral brush (the scopa) that facilitates the transportation of the pollen to the nest. The species of Anthidium characterize mainly for the yellow (or white) bands interrupted on the abdomen, which make them look a little like wasps. Moreover, the male is bigger than the female, an uncommon feature among the hymenopterans.

The Florentine anthidium is a carder bee (see below). It was described in 1775 by the Danish Johan Christian Fabricius. The original description was based on at least one specimen conserved at the Museum Tottianum in the collection (nowadays disappeared) of the Danish Count Otto Thott. Fabricius had originally inserted this bee in the genus Apis created by Linnaeus. In 1804, that is 29 years later, he reclassified it in his new genus Anthidium.  It is still classified there, with about 220 other species widely distributed in the various ecozones (but Antarctica). About thirty species are reported for Europe. 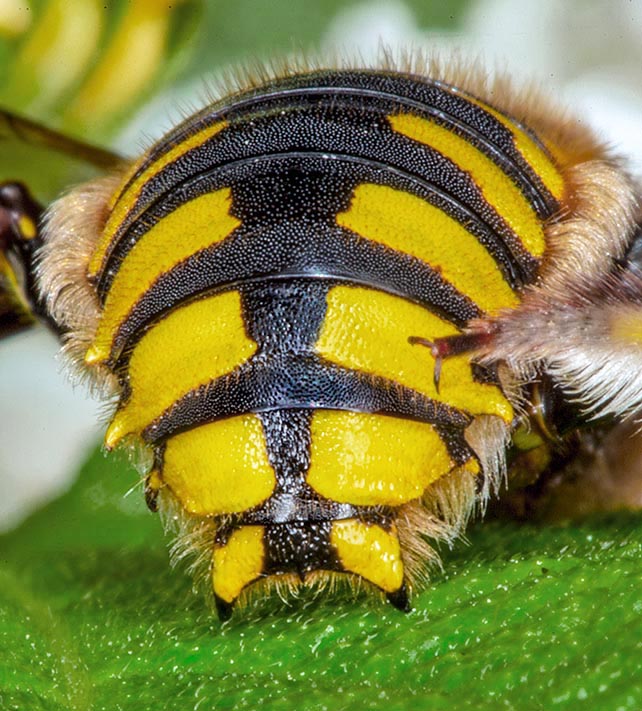 Distinguishes from female due three-abdomen black apical teeth: a small at center and two long and sharp on sides © Giuseppe Mazza

Fabricius has not given any explanation concerning the etymology of the name of his genus Anthidium, and not even of the species florentinum. Hazarding a hypothesis, Anthidium, could have come from the old Greek “ἄνθος, ánthos” = “flower”, as well as from the Greek “ἄνθηδών, anthēdṓn” = “bee”. As he placed his new species in the south of Europe (“Europa australiori”), we can deduce that “florentinum” refers to “Florentine” (that is, coming from the Italian city of Florence). Anthidium florentinum has no common or vulgar names, but only the simple translation of its scientific name in the language.

In some southern and western Europe regions, Anthidium florentinum can be mistaken with a very common species, A. manicatum (Linné, 1758).  These two species, actually have similar look, size, colouration and an aggressive territorial behaviour. Anthidium florentinum is recognized for the following characters: in the male →

(1) tergite 5 with some lateral teeth, (2) tergite 7 with three blunt teeth equidistant and arranged in a triangle  and (3) the well defined clipeus teeth; in the female → (1) side of tergite 4 with a tubercle of variable size, as it can be weakly developed or shaped like a tooth, (2) tergites 5 and 6 with hooked and sharp lateral teeth, (3) one size a little bigger (from 12 to 16 mm; whilst it is from 10 to 13 mm in A. manicatum), (4) clipeus totally yellowish (but a black apical edge).

Anthidium florentinum is widely distributed within the Palearctic ecozone. This bee is native to the Mediterranean Basin and its range spreads to North Africa (Morocco, Algeria), to southern and central Europe (Slovakia, Hungary, Albania, Romania, BulgariaSlovenia, Croatia, Bosnia and Herzegovina, Serbia, Montenegro,

North Macedonia, Greece, Turkey), to Middle East (Iran, Palestine, Syria, Lebanon, Israel) to central Asia (Kazakhstan, Tajikistan, Uzbekistan, Turkmenistan, Pakistan, Afghanistan) and to China (Inner Mongolia, Xinjiang, Gansu, Sichuan). In Europe it is not rare in the south of France, in Italy and in Spain; it is found also in Germany and in Switzerland. 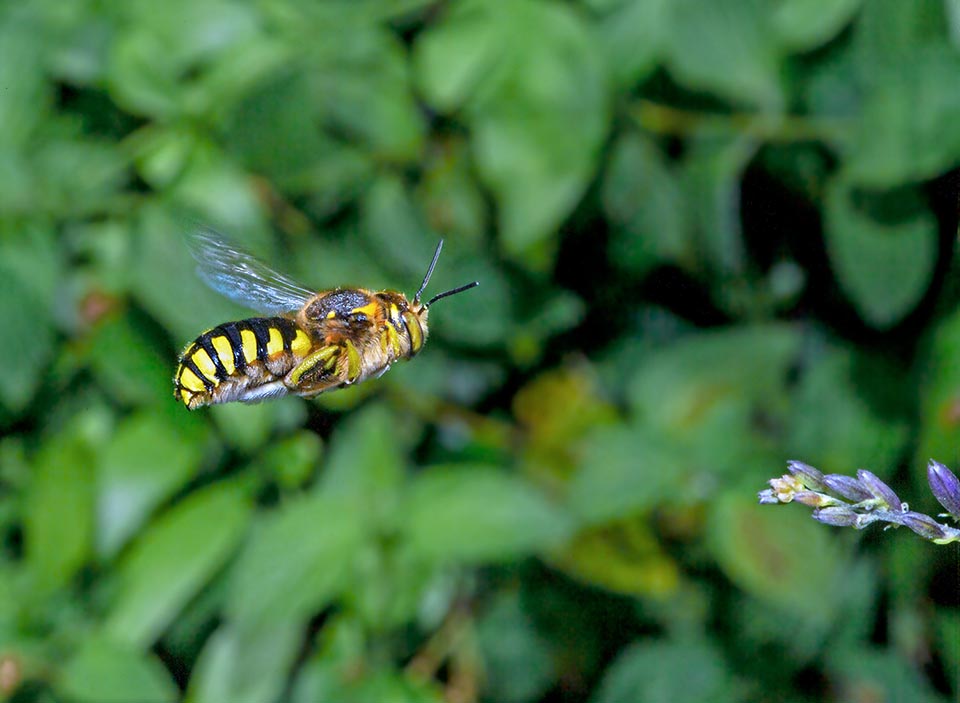 Males, territorial, patrol flying their small kingdom, chasing away the intruders from the flowered plots visited by the females © Giuseppe Mazza

We have to note, finally, that this solitary bee is absent in Great Britain, whilst for Belgium it has been sighted in the region of Brussels (data to be confirmed after further observations). The Florentine anthidium has been accidentally introduced in Canada, in 2012, date from which several individuals have been photographed and reported on various naturalistic sites. It seems that the species is getting acclimatized in those areas.

The anthidia are also known with the popular name of carder bees, definition coming from their peculiar behaviour. Contrary to other species of the family Megachilidae (nicknamed “leaf-cutters”), they do not shred the leaves or the petals of the flowers for upholstering their own nest. Conversely, they tear up the hair found on the plants, pile it up in a sort of balls of “wool” they carry under their own body and finally utilize it for lining the nest (see below). 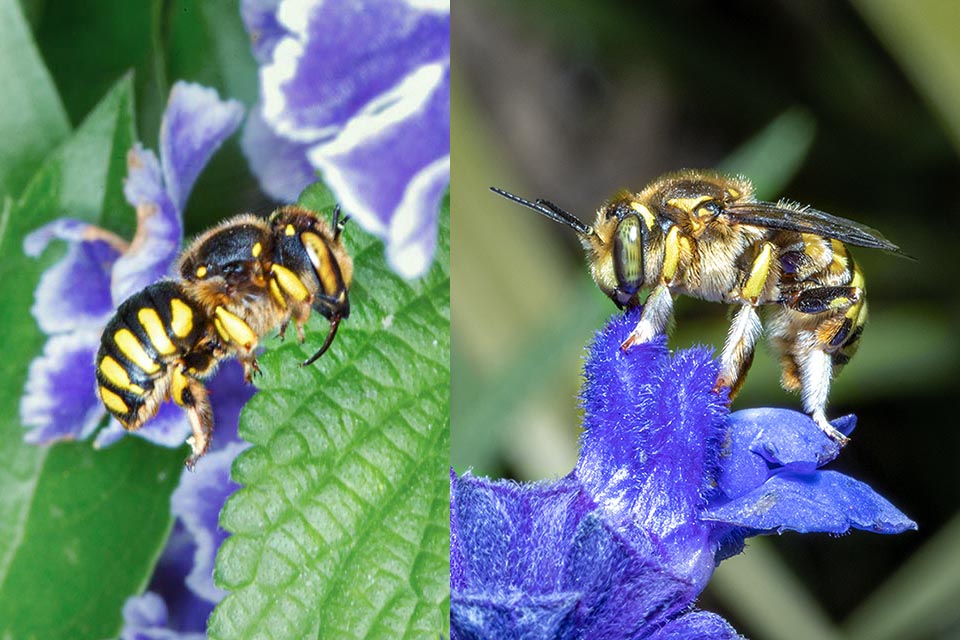 Anthidium florentinum is a generalist bee (called polylectic) that has been observed visiting a large number of species. Among these we mention some Asteraceae (Calendula arvensis, or field marigold, Centaurea calcitrapa or red star-thistle), some Amaranthaceae (Gomphrena globosa or globe amaranth), some Fabaceae (Lotus corniculatus or common bird’s-foot trefoil), some Labiatae (Antirrhinum majus or snapdragon, Ballota acetabulosa  or Greek horehound, Lavandula latifolia or boadleaved lavender), some Rosaceae (Rubus ulmifolius  or elmleaf blackberry), some Alliaceae and some Scrophulariaceae (Verbascum thapsus or great mullein, Linaria sp. or toadflax).

In Italy A. florentinum is often attracted by the Rubus sp. (Rosaceae). In France, many authors report it also on the southern globethistle (Echinops ritro), the black horehound (Ballota nigra), the lamb’s ear (Stachys  byzantina), the silver ragwort (Senecio cineraria) or the rose campion (Silene coronaria). In a recent comparative study, A. florentinum has been identified as an efficient pollinator of alfalfa (Medicago sativa); however its territorial behaviours limit its possible utilization as a controlled pollinator. 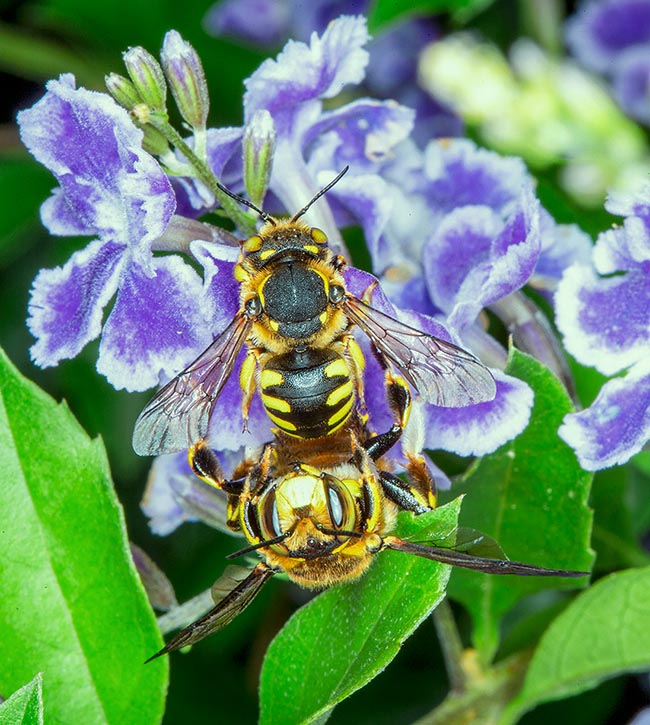 As soon as it sees a female, the male jumps on her vigorously. Mating lasts just a few seconds; then the couple quickly separates. The fecundated female continues collecting as nothing had happened. It does not waste time and energy rejecting other males. The multiple couplings increase, with different genes, the fecundated eggs © G. Mazza

Female: 13-15 mm. Short antennae, little longer than the head, of black colour. Eyes of flattened oval shape, occupying almost all the length of the head. Clipeus and lateral facial part wholly yellow, apical margin with a black edge and with short rounded denticules; jaws black apically and yellow at the base. Tergites 5 and 6 with a blunt apical tooth. Tergites from 1 to 6 with two lateral yellow spots separated by a black median band; the dimension of the spots increases progressively towards the back. Legs with extended yellow and black patterns; ventral brush (scopa) golden yellow. A yellowish pubescence is present on all the body.

Male: 14-20 mm. Tergite 4 laterally adorned by a developed tubercle or tooth shaped; tergites 5 and 6 with sharp lateral teeth, the yellow spots of the tergites from 1 to 6 slightly less extended than those of the female (the shape and the extension of these spots strongly vary within the species). Tergite 7 mostly yellow with a brown discal spot more or less extended and three black apical teeth: one small at the centre and two longer and sharp on the sides. Abdominal sternites covered by a yellow pubescence less dense than the abdominal brush of the female (the male does not collect the pollen). Internal face of the tibiae and of the femurs with fringes of long clear bristles.

This solitary bee can be encountered especially from May to September. The length of its life is limited to some weeks. These bees are called “carder” because even if they nourish of nectar and pollen of various species of plants, they need pubescent plants for building up their own nest (see above).

The females “scratch” the lower face of the leaves of these plants thanks to their jaws finely toothed and form a ball of fluff they carry between their legs up to the nest. This one, often located close to their preferred plants, is built in a micro-cavity of a tree or of a wall, in the hollow of a stem, or in a ravine in the ground, or even in nests abandoned by other solitary bees in stems of plants or in the brambles. Starting from this ball of vegetable fluff is made a small nest where one egg will be laid on a layer of nectar and pollen, at times called “bee bread”. The small cell is then closed with some vegetable wadding. The female can fabricate about ten small cells during its short life.

The larval development of the Florentine anthidium has not yet been documented in the scientific literature. 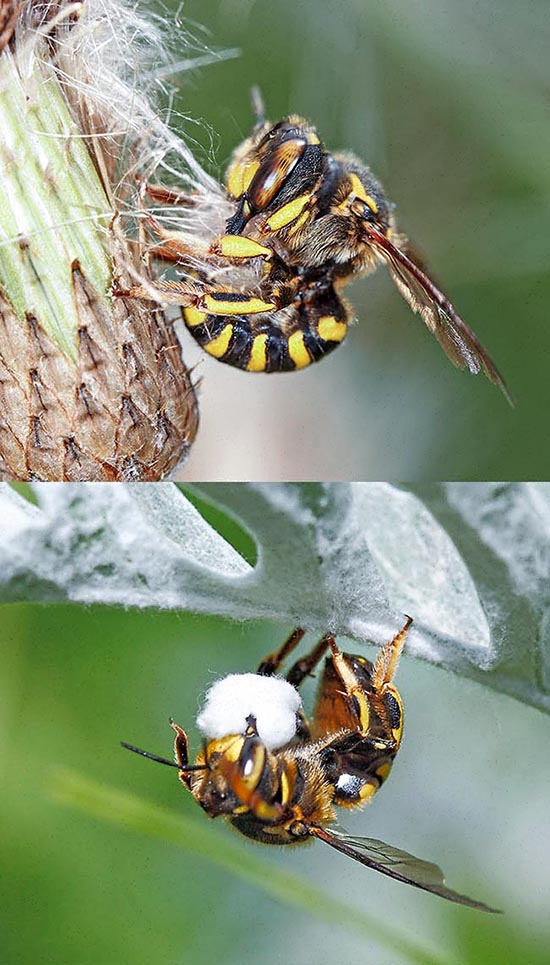 Female collecting flowers and leaves down. It’s wrapped in a ball and carried to the nest placed in small hollows. It will contain only one egg, put on layer of nectar and pollen, at times called “bee bread”. The female can fabricate about ten small cells during her short life © Lucie Kriznar

However, it is quite probable that the preimaginal stages are similar to those of Anthidium manicatum, the most common species in Europe: the small larva emerges from the egg and eats the “bee bread” remaining sheltered in the wadded small cell of the nest. As the days go by the larva grows up, develops, transforms in nymph, always inside the small cell that protects her from the vicissitudes of the environment and from the predators. After some weeks the adult, at last, will leave the nest.

While the females are busy in collecting to obtain the food resources or the vegetable down for building the nest, the males – territorial – go patrolling the territory around the flowered plots, in particular close to the plants more visited by the females. They do not hesitate in violently bumping all intruders or potential competitors to drive them away. At times they catch them with their front legs in order to push them out from their territory. Aggressive by nature, the males are equipped for fighting and have two types of weapons: small spines placed on the edge and at the extremity of the abdomen and a pair of jaws for biting. The males are ready to face any intruder, even insects much larger than them, like the violet carpenter bee or the bumblebees (Bombus sp.), which they do not hesitate to attack and drive away from their own territory. We must also remember that contrary to the females, they do not have the sting and consequently they cannot prick the rivals or the intruders. Some males, often the smallest ones, have been at times observed at the margins of the territories surveyed by bigger “grumpy” males; these “more shy” males do not reproduce or do it only quite rarely.

The male performs short stationary flights and, when sights a female, rushes on it vigourously. It seizes it firmly thanks especially to the strength of its forelegs, fringed by long lashes that reinforce the adherence between bodies, and maybe also to the spines of its abdomen. Coupling lasts only some second; then the couple quickly splits up. The male looks for other females, whilst the fecundated female goes on in collecting. Love makes hungry. Males and females have various partners (they are therefore polyandrous and polygynous). The polygyny of the females seems to indicate the existence of a competition between the spermatozoa, having the majority of those of the last male that has coupled before the spawning, more chances of fecundating a greater number of eggs. Having to deal with this kind of selective pressure, the males of Anthidium must not necessarily emerge before the females, unlike other species of solitary bees. By multiplying their partners, the males increase the probabilities of transmitting their own genes. On the other hand, the females, accepting multiple matings, save energies for ensuring their offspring (collection of pollen, construction of the nest, spawning) rather than disperse them in rejecting the male pretenders. The reproductive success of the females seems to be less dependent on the size of the body than the males, where the bigger males reproduce more than the smaller ones.

In the list (not exhaustive) of the species considered by the International Union for Conservation of Nature (IUCN) and referred to the national taxonomic database of France, the Florentine anthidium is considered as a species of least concern (that is species for which the risk of extinction on the territory is low).