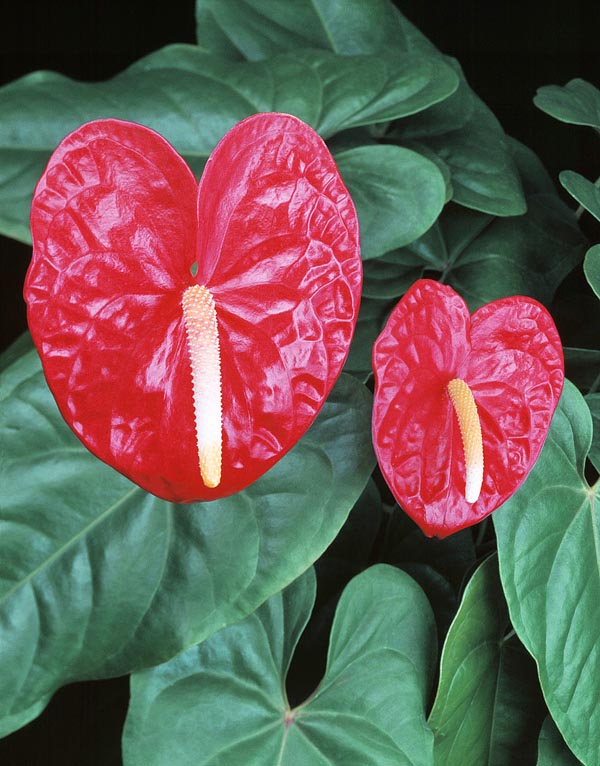 The Anthurium andraeanum Linden ex André (1877) is native to Colombia and Ecuador, where it grows in the pluvial forests between 600 and 1.200 m of altitude.

The name of the genus is the combination of the Greek wordings “anthos” = flower, and “oura” = tail, with reference to the spadix of the inflorescence; the species is honoured to the French horticulturist, landscape gardener and editor, Edouard François André (1840-1911) who discovered it in 1876 and described it for the first time.

Evergreen, perennial, rhizomatous, epiphytic herbaceous, with an erect stem tall up to 30 cm, and a diameter of about 2 cm, from which, time passing, aerial roots develop, the leaves are cordate-sagittate of an intense green colour, leathery and glossy, 10-40 cm long and 10-20 cm broad, on thin, 20-60 cm long petioles.

The long-lasting, about six weeks, inflorescences, are axillary, on an erect reddish peduncle, more or less as long as the petioles, and are formed by a showy spathe of orange-red colour, heart-shaped, with often prominent veins, 6-15 cm long and 5-12 cm broad, and a 5-9 cm long spadix, usually bent towards the bottom, of yellow colour tending to the white when ripe, on which are like a spiral several tens of small hermaphrodite, protogeneous flowers (the stigma, which is the female part, is receptive before the ripening of the stamens, thus avoiding the self-fertilization).

In cultivation do exist several varieties and hybrids with colours of the spathe going from the white to the green, pink, red and combinations of these colours.

The fruits are yellowish ovoid berries containing one or two seeds. It reproduces by seed, division or apical cutting provided of aerial roots; industrially, by micro-propagation in vitro.

The plant can be cultivated in open air in humid tropical climate zones, in shady position on organic, porous and draining substrata, constantly kept humid; as plant in pot for indoor decoration, it is not very popular, due to the difficulty, for those not owning a greenhouse, to maintain the high levels of local humidity which it needs, with temperatures around the 20-25°C, without sudden variations.

It is, on the contrary, amply cultivated for the production of the cut flower, which is highly decorative and long-lasting, in some tropical countries, in particular the Hawaii, from where it is despatched all over the world, but also in special greenhouses outside from the tropical zones.

The plants is highly sensible to the bacterial infections caused by the Xanthomonas axonopodis pv. dieffenbachiae, which has caused, in the past, great economic damages, which has originated several researches for its genetic improvement.

All the parts of the plant contain calcium oxalate, therefore it is a good practice to keep a minimum of precautions when handling the plant in order to avoid possible skin irritations and also to avoid that domestic animals can chew and swallow some parts.