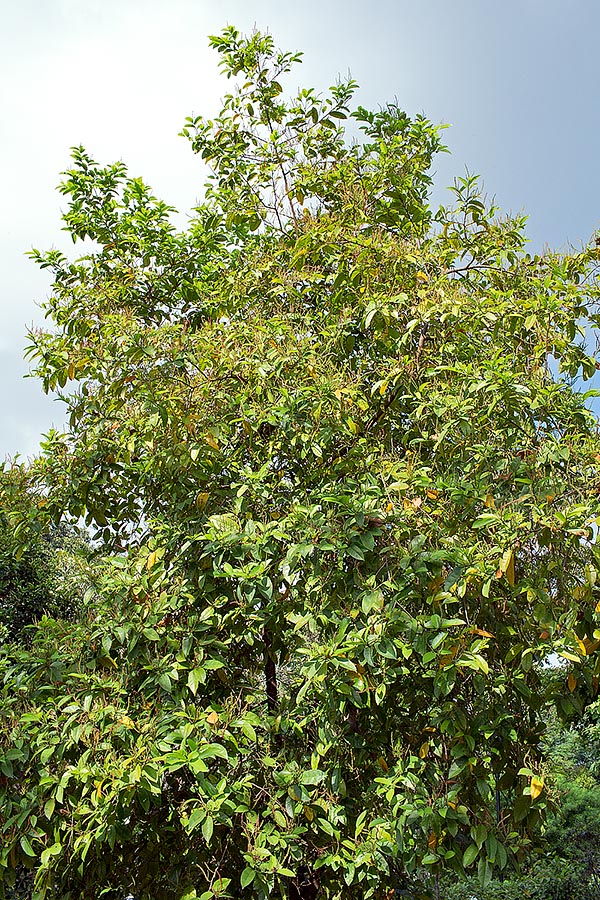 The name of the genus is the combination of the Greek preposition “ἀντί” (anti) = against and of the substantive “δέσμα” (desma) = link, bond, bandage, after some, whilst for Joannes Burman (Burmannus) (1707-1780) it would mean poison (Thesaurus Zeylanicus), with reference to the use against the snake bite; the specific name should come, after Georg Eberhard Rumph (Rumphius) (1627-1702), from a local name (Herbarium Amboinense).

The Antidesma bunius (L.) Spreng. (1824) is a shrub or more frequently an evergreen dioecious tree that may reach the height of 30 m, often provided in the old specimens of tabular roots at the base (roots similar to buttresses), with smooth or slightly wrinkled bark of brown colour. Linear stipules (appendages at the base of the leaf that have the main task of protecting it during the initial phase of growth), about 0,5 cm long and 0,2 cm broad, caducous; leaves, on a 0,5-1,5 cm long petiole, alternate, simple from oblong-elliptic to obovate with pointed to rounded apex and entire margin, 6-20 cm long and 4-8 cm broad, of glossy dark green colour above, paler below, coriaceous.

Inflorescences bearing numerous tiny flowers, of about 2 mm of diameter, without petals, the male ones being axillar or terminal, ramified, 6-20 cm long, the female ones terminal, rarely ramified, 8-20 cm long. Sessile male flowers with 3-4 lobes calyx, rarely 5, 1-1,5 mm long, and stamina, in the same number as the lobes, 2-3 mm long, with reddish anthers; the flowers emit a quite unpleasant smell. Female flowers, on a 0,5-1,5 mm long pedicel, 2-6 mm in fruit, with calyx similar to the male one, glabrous or pubescent ovary and 3-4, rarely up to 6, stigmas; female specimens may carry also hermaphroditic flowers and fructify abundantly in absence of male plants.

The fruits are ellipsoid drupes compressed laterally, 0,8-1,2 cm long and 0,6-0,8 cm broad, glossy, initially of green colour, then white, yellow, intense red and finally blackish purple when ripe, coexisting on the same infructescence ripening in different times. The fuits contain only one oblong seed, about 7 mm long and of 5 mm of diameter, immersed in a sourish to sllightly sweet pulp when completely ripe. 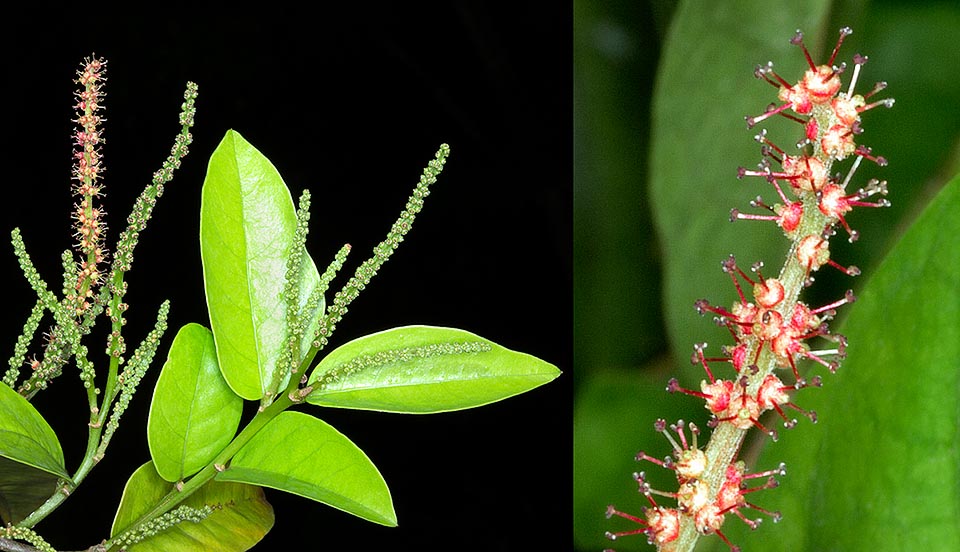 Ornamental tree due to the luxuriant foliage and the showy infructescences of the variously coloured fruits, suitable for the tropical and humid subtropical zones and marginally for the mildest temperate-warm ones, where temperatures just under the 0 °C are a short lasting exception, but where usually does not get to fructify. It requires full sun or slight shade and is not particular about the soil, even if poor, slightly acidic to slightly alkaline, but grows best in the fertile ones maintained constantly humid.

It is often cultivated in some of its origin areas close to the villages and in the family orchards for the fruits rich in citric acid, consumed raw or utilized in sauces to accompany the fish, for syrups and jams or for getting alcoholic beverages, whilst the young leaves are consumed, as vegetable, with rice dishes. The bark contains a toxic alkaloid; roots and leaves are utilized in the traditional medicine for the traumatisms, the fruits in the gastrointestinal disorders, indigestion, dysentery and in diabetes, in particular the hypoglycemic activity of the extracts appears to be confirmed by some laboratory studies. Finally, the bark is employed locally for fabricating robust cordages.

→ To appreciate the biodiversity within PHYLLANTHACEAE family please click here.