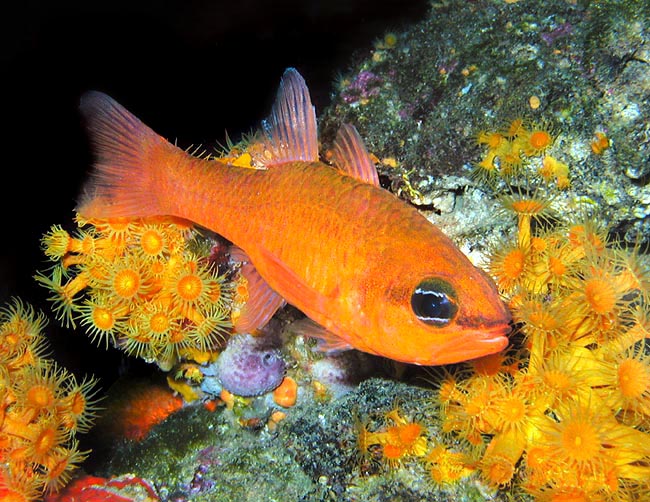 The Cardinal fish (Apogon imberbis) lives in darkness, in submerged grottoes among the corals © Giuseppe Mazza

The showy Cardinal fish (Apogon imberbis Linnaeus, 1758), belongs to the class of Actinopterygii, the ray finned fishes, to the order of Perciformes and to the showy and multiform family of the Apogonidae.

The name of the genus comes from the Greek “A pogon” = beardless, and that of the species emphasizes the concept in Latin, as “imberbis” means the same thing. But what has to do the beard? This is explained by the Italian name of “Re di triglie” (= king of mullet).

Seen the colour, the zoologist who was the first to examine this species, thought, in fact, to be facing a special mullet, without barbels, the king of the mullets, in conclusion, hence the Linnaeus’ name of Mullus imberbis = mullet without barb (beard), nowadays synonym.

The genus Apogon was created later on in 1802 by Bernard Germain Étienne de la Ville, Count of Lacépède (1756-1825) for gathering several tropical species having lively colours.

The Apogon imberbis is the only Mediterranean member of the genus Apogon, but its diffusion is ampler, as, passed the Gibraltar Strait, it protrudes on the Atlantic coasts. Northwards, it reaches the Biscay Gulf, and then the Acores, Cape Verde, Madeira, the Canary Islands and the African coast from Morocco up to the Gulf of Guinea.

As one can easily guess from the big eyes, the Cardinal fish loves darkness and spends most of its day in dark grottoes. In summer, it can be seen while escaping from a den to another, at 10-70 m of depth, but in winter, for getting shelter from the cold, it goes down even up to 200 m 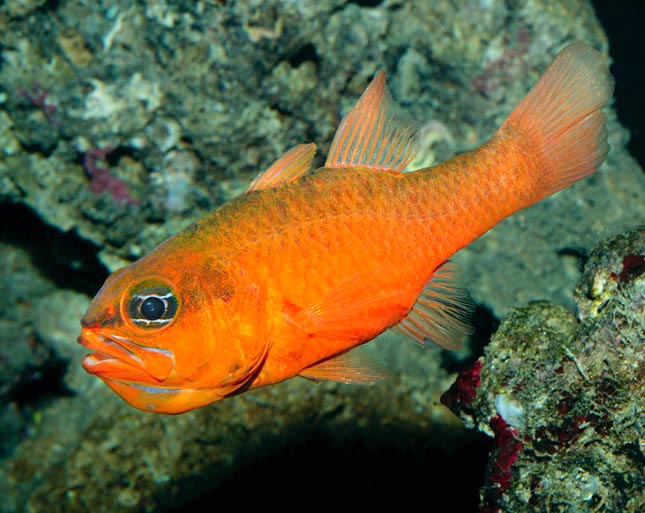 A male with the eggs in mouth along the coasts, but in winter it may go down even to 200 m deep © G. Mazza

It measures, usually, 10-15 cm and is recognized at once, prima facie, due to the cardinal red which contrasts with the silvery-bluish iris, almost black, of the eye, run by two typical clear bands.

At times, on the caudal peduncle, we see three tiny spots in triangular position, which may merge forming a more visible one.

The mouth is relatively big, with countless small teeth placed on the jaws, the vomer and on the palate.

Very shy, the cardinal fish lives solitary or in small schools. Hidden during the day, it plucks up courage by the evening, and gets out hunting small fishes, crustaceans and invertebrates. The males, after the nuptial parade, which takes place between June and October, fecundate the just spawned eggs which stick each other, thanks to some tacky filaments and form a small ball. The male sucks it and keeps it inside the mouth up to the hatching, for several days.

A commendable parental care, but when then daddy courts other females and the fasts follow one another, it may happen that it eats, by accident or by hunger, eggs and sons, as is proved by half-digested residuals found in the stomach of some fished specimens. On the other hand, one egg more or less, this splendid species is, fortunately, not endangered. The vulnerability index of this species is of 15 over 100.