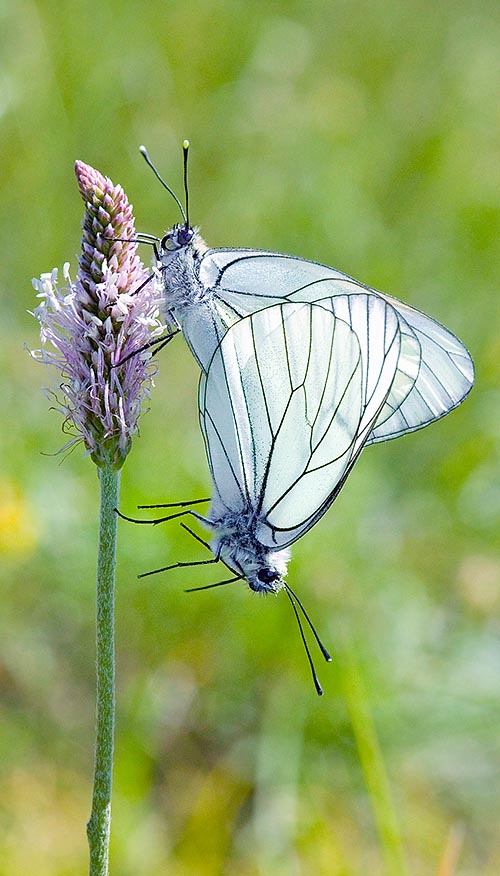 White, almost transparent, with its black or dark brown veins and its 75 mm of wingspan, Aporia crataegi, here while mating, is really unmistakable © Mazza

The Black-veined white (Aporia crataegi Linnaeus, 1758) belongs to the order of the Lepidoptera and to the family of the Pieridae a rather vast group including butterflies of various size, present in every continent and which in Europe includes the so-called “white” ones, that is the cabbage butterflies, the small white, the napi and the sinapis.

In the tropical areas this family includes butterflies of remarkable beauty and of fantastic colours but also in our continent some genera display charming tonalities (Colias, Anthocharis, Gonepteryx).

The black-veined white is a very common butterfly even if subject to strong annual fluctuations. In some years it becomes even a pest and it is possible to observe groups on the flowered meadows seeing the presence of hundreds of individuals in quite reduced spaces.

As it loves the proximity of water, often on the mountain paths close to streamlets can be seen thousands of specimens practically leaning on each other, busy in sucking the salts that permeate the soil. Their attraction towards this activity renders them extremely vulnerable to possible dangers as they may even be touched without the fear that they flee away.

It is a species that is showing during the last century a progressive tendency to move to altitudes higher than their traditional habitat, usually abandoning the plain and preferring the hilly zones. It loves the flowery meadows and does not have a preference for any particular essence.

The scientific name Aporia has been object of various interpretations. The Greek etymology says that A-privative alpha united with “poros” = narrow passage, should identify the difficulty in transiting in a narrow and complex way and Macleod refers this to the difficulty in understanding the strong fluctuation that this butterfly, only member of this genus, has during the various years.

Referring to this sense of difficulty and of shortage, Westwood and Spuler join this fact to the scarcity of scales this butterfly has on the wings and which often renders them rapidly hyaline and transparent. Another possibility stands in the rarity or the strong reduction of this butterfly in some periods and in some areas. Explanation given in Germany during the second decennium of the 19th century and which might lead to definitely agree with this interpretation as the prevailing concept.

The name of the species crataegi simply comes from the genus Crataegus, the scientific name of the hawthorn, its host plant. The common European names are: Black-Veined White, in English; Baum Weissling, in German; Gazé or Piéride de l’Aubépine, in French; la Blanca del Majuelo, in Spanish.

The black-veined white is a Palearctic butterfly diffused all over Europe excluding the northern part. It is common in the Mediterranean basin, African coasts included, temperate Asia up to Korea and Japan. It is considered as endangered in various north-European nations and is extinct in the British islands whilst is very abundant in the other nations where is present. It is totally absent in Sardinia and in Corsica. It lives from the sea level up to 2000 m of altitude. 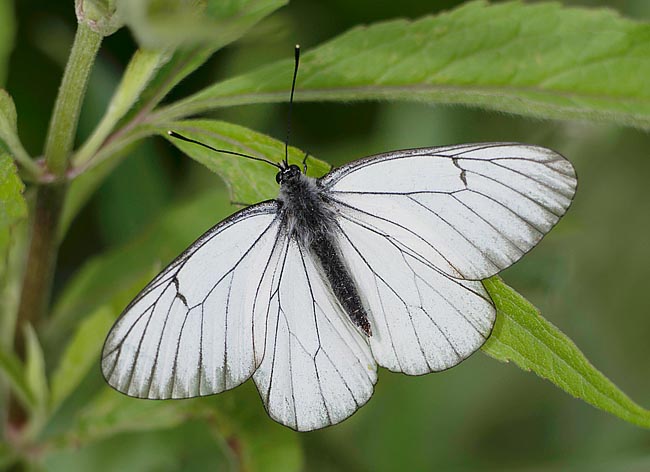 It is a monovoltine species. Eggs are laid in June-July and the larvae spend the winter in a sort of nest built around the host plant. The pupae fix on the trees branches and when hatching emit a red blood discharge liquid that once long time ago was deemed as a divine sign of ill venture for the population and the harvests © Gianfranco Colombo

The Black-veined white is a remarkably big butterfly reaching the 75 mm of wingspan. It is completely white with very much marked veins on both wings of black colour, very strong in the males and dark brown in the females. As said before, on the apices of the fore wings, it shows a scarcity of scales which reveals the glossy and hyaline surface of the wing which, therefore, results being transparent.

The entire shingling of this butterfly results furthermore rather weak and after a few days of flight the specimens lose most of this cover leaving uncovered most of the wing surface. They have a stocky blackish body becoming glossy and oily after a few days of life. Like all pierids, the antennae are robust and clavate and are long about half of the fore wing. It is a highly sociable butterfly and gathers often in huge number in the visited areas.

It loves to frequent open and sunny meadows with strong presence of inflorescences it continuously visits flying from flower to flower and creating, where present in big quantity, that messy and wavy movement that makes them look from afar a sort of a moving sea. Particular and odd is the behaviour of these butterflies when the sun suddenly disappears: they hang on the flowers where they are staying, remaining motionless in bunches until when the rays do reappear.

It is a monovoltine species and the adults fly away from May to July. It lays a huge number of eggs as during the development it is often subject to deadly reduction. At times, entire generations reduce to quite a few specimens whilst in other years the survival avers almost total. 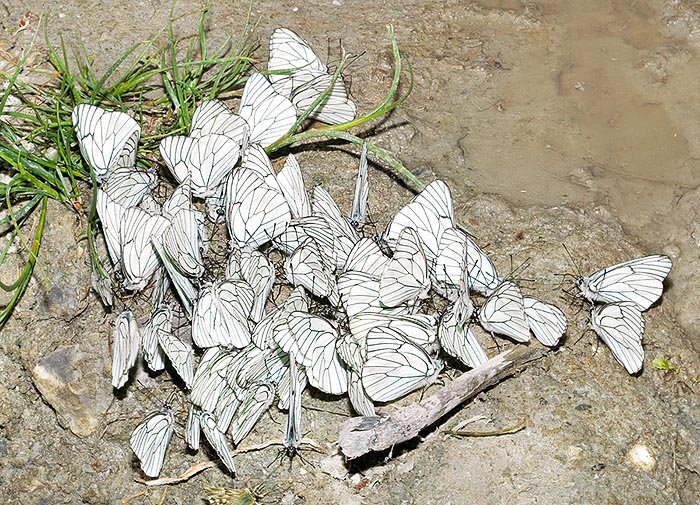 It is a gregarious species, common or rare depending on the years. Often, on the mountain paths, close to streamlets, are found thousands of specimens close each other, busy in sucking the salts permeating the soil © Giuseppe Mazza

The eggs are laid between June and July and are usually placed directly on the upper face of the leaf.

The larvae, during the first phases, keep united in a unique and big nest built around the whole host plant, in which they will spend the winter. Though this cocoon protects the whole colony from the natural foes, the final number of the survivors will usually result very small.

Upon the last stage, the caterpillars abandon this nest and look for an isolated place where to pupate.

The caterpillars are whitish with an ample yellowish dorsal line and the whole body is scattered of very fine white spines.

The chrysalises, yellow with a slight and sparse black dotting, are firmly fixed to a small branch.

When hatching, this butterfly emits a blood red discharge liquid, called meconium, that inevitably soils the tree where the cocoon is staying, a situation that, in the past, has originated the strangest beliefs and legends. In England, when this butterfly was still much diffused, when these trees and the underlying grass did appear blooded, it was thought that the happening was a divine sign of bad omen for the populations and the harvestings.

The caterpillar nourishes mainly on Prunus, Crataegus and Spiraea but also on other Rosaceae and fruit trees. At times it is a parasite in the fruit orchards.