The green garden of fish. All about aquarium plants. How to cultivate them. Each one has its own task. 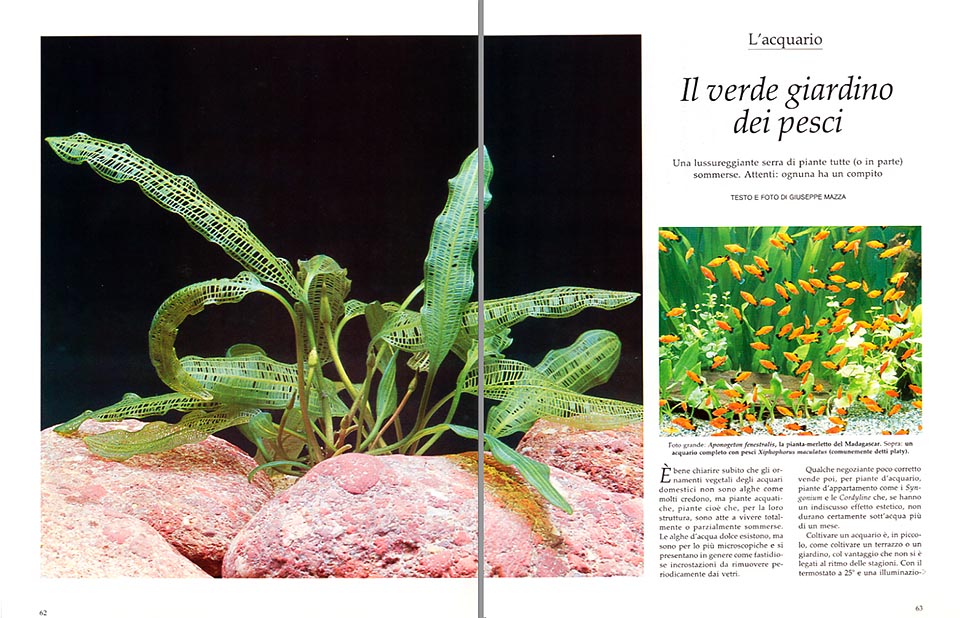 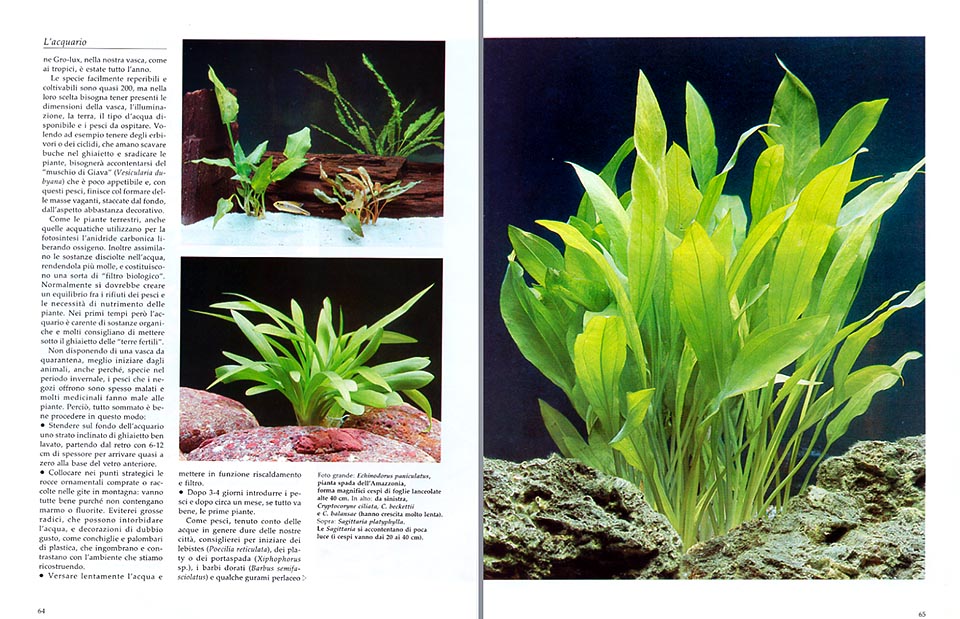 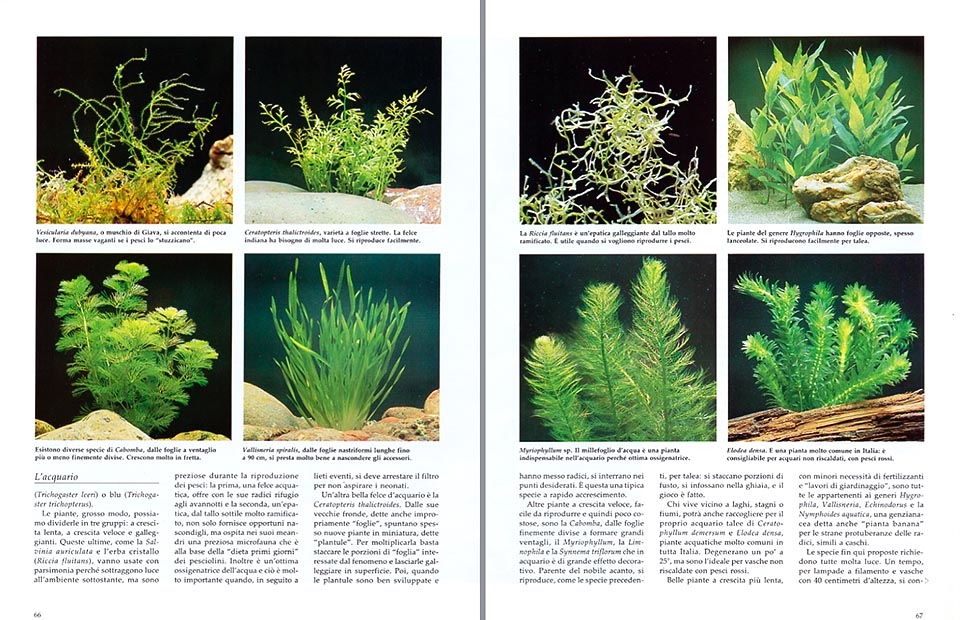 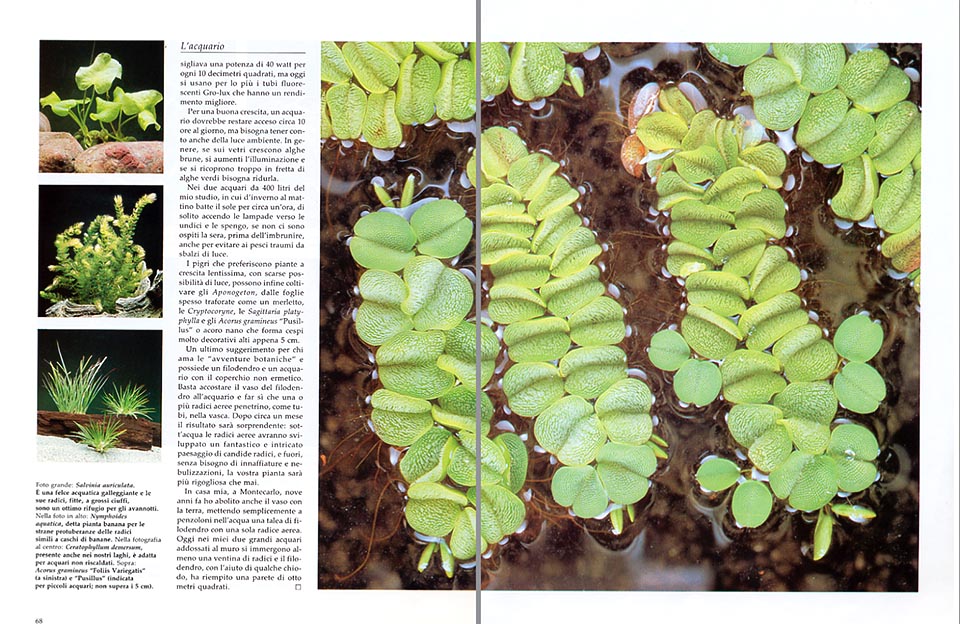 My mother-in-law insists in saying that they are algae, and the elder of my daughters, Emilie, five years old, asserts that, behind the big plant of Echinodorus, which is towering at the centre of the pool, Barbet and Zebrino, two nice fishes of our aquarium, are playing ball, or are building up their nest.

We must say that the magic vision of the underwater world stimulates the fantasy, but for the “grown-ups”, it is better to clarify that the vegetable ornaments of the domestic aquaria are not algae, but water plants, that is, plants which, thanks to their structure, can live totally or partly submerged.

The fresh water algae do exist, but they are, mostly, microscopical, and appear, usually, as annoying green or brown incrustations, which must be, periodically, removed from the glasses.

Some not too much honest dealer sells as aquarium plants, the apartment ones, such as the Syngonium and the Cordyline, which, even if holding an unquestionable aesthetical effect, by sure do not last under water more than one month.

He who purchases an aquarium must not, after me, look at it as a knick-knack, but as a small greenhouse for aquatic plants where to recreate, little by little, a submerged world.

To cultivate an aquarium is, on a smaller scale, like cultivating a terrace or a garden, with the advantage that you are not tied by the rhythm of the seasons. With the thermostat at 25 °C, and a Gro-lux lighting, in our pool, like in the Tropics, it’s summer all the year round.

The species easily available and tillable, are almost 200, but when choosing them, we have not to forget the size of the pool, the lighting, the land, the type of available water, and the fishes to keep inside.

If, for instance, we want to keep some herbivores or some cichlids, which love to dig holes in the gravel and uproot the plants, we shall have to content ourselves of the Java Moss (Versicularia dubyana), which is little plummy and, with these fishes, ends up in forming some wandering masses, detached from the bottom, with a rather decorative look.

But let us start from zero, that is, from the person who has just bought an aquarium, and, loving both plants and animals, wants to build up, at home, an ecological environment.

Like the terrestrial plants, also the aquatic ones utilize, for the photosynthesis, the carbon dioxide, freeing oxygen. Moreover, they absorb the substances dissolved in the water, rendering the same softer, and constitute a sort of “biological filter”.

Normally, we should have to create a balance between the wastes of the fishes and the nourishing necessities of the plants. At the beginning, however, the aquarium lacks of organic substances and many suggest to place, under the gravel, some “fertile lands”.

Not holding a quarantine basin, I would say to begin from the animals, also because, particularly in winter, the fishes the shops offer are frequently sick and many medicines cause damages to the plants.

Consequently, all things considered, I would say to proceed in this way:

1) To spread on the bottom of the aquarium a sloping stratum of well washed gravel, starting from the back with 6-12 cm of thickness, to get almost to zero at the base of the front glass.

2) To place in the strategical points the ornamental rocks bought, or picked up during the excursions on the mountains: they are all suitable, provided they do not contain marble or fluorite. I would avoid big roots, which can trouble the water and decorations of dubious taste, such as plastic shells and divers, which are obstructive and are in contrast with the environment we are constructing.

3) To pour the water slowly and start the heating and the filter.

4) After 3-4 days, to introduce the plants, and, after about one month, all going well, the first fishes.

I realize that this is a rather long process, which probably will shock some readers and the dealers which love selling and selling again fishes and plants, but, as per own experience, this seems to me to be the best way.

As fishes, keeping in mind the rather hard waters of our cities, I would suggest, as a beginning, some guppies (Poecilia reticulata), some platyfishes, or some swordtails (Xiphophorus sp.), the Gold Barbs (Barbus semifasciolatus), and some Pearl Gourami (Trichogaster leeri), or Blue Gourami (Trichogaster trichopterus).

We can split the plants, roughly, in three groups: those growing up slowly, the fast ones, and the floating ones.

The last ones, like the Salvinia auriculata, and the Crystalwort (Riccia fluitans), must be utilized with parsimony, because they reduce the light to the are placed below them, but are precious during the reproduction of the fishes.

The first, an aquatic fern, gives with its roots, shelter to the fry and the second, an hepatica with a thin thallus very ramified, does not only furnish excellent hide-outs, but gives hospitality in its meanders, to a precious micro-fauna which is at the base of the “first days diet”, of the small fishes.

Furthermore, it is very good for oxygenating the water, and this is very important, when, following yo births, we have to stop the filter in order not to aspirate the new-born.

Another nice aquatic fern is the Certopteris thalictroides.

To multiply it, it suffices to take off the parts of “leaf” interested by the phenomenon, and to leave them floating on the surface.

Then, when the plantulae are well developed and have put roots, they are to be interred in the desired places.

This is a typical fast growing species.

Other growing fast plants, easy to reproduce and, therefore, little expensive, are the Cabomba, with the leaves delicately parted to form great fans, the Myriophyllum, the Limnophila, and the Synnema triflorum.

In tropical Asia,where it grows spontaneous, this plant is considered as a pest for the paddy-fields, but when in aquarium, it has a big ornamental effect.

Relative of the noble acanthus, it reproduces, as the previous species, by cutting: you take off parts of the stem, hollow them in the shingle, and, that’s it.

He who has lakes, ponds and rivers within reach, can also pick up, for his own aquarium, some cuttings of Ceratophyllum demersum and Elodea densa, aquatic plants very common in all Italy.

At 25 °C, they degenerate a little, but they are the best for not-heated pools with gold fishes.

Nice plants, with slower growth, and with lesser necessities of fertilizers and of “gardening”, are all the members of the genera Hygrophila, Vallisneria, Echinodorus, and the Nymphoides aquatica, also called “Banana Plant”, due to the strange protuberances of the roots, similar to bunches of bananas.

All the species proposed until now require much light. Time ago, for filament lamps and pools of 40 cm of height, they were suggesting a power of 40 Watts per every 10 square decimetres, but now they use mostly the fluorescent Gro-lux tubes, which have a better output.

As a rule, for a good growth, an aquarium should remain lit for about 10 hours a day, but we have not to forget the ambient light.

Generally, if some brown algae are growing on the glasses, the lighting must be increased, and if they cover too quickly of green algae, the lighting is to be reduced.

In the 400 litres two aquaria of my study, where in winter, the morning, the sun comes for about one hour, usually, I switch on the lamps at around 11 o’clock, and switch them off, if there are no evening guests, before dusk, thus to avoid the fishes to shocked by sudden changes of light.

The lazy people who prefer very slow growing plants, with scarce need of light, can, finally, cultivate the Aponogetum, with the leaves often bored like a lace, the Cryptocorine, the Sagittaria platyphylla, and the Acorus gramineus var. pusillus, or Dwarf Acorus, which forms very ornamental tufts, only 5 cm tall.

A last hint for a lover of “botanical adventures”, and owns a philodendron and an aquarium with a not-airtight cover.

It suffices to place the pot of Philodendron close to the aquarium and to manage to get one or more of its aerial roots to enter, like tubes, the pool.

After about one month, the outcome will be surprising: under water, the roots will have developed a fantastic landscape of candid aquatic roots, and outside, without any need of watering, or nebulizations, your plant will be astonishingly luxuriant.

At home, in Monte-Carlo, nine years ago, I have abolished also the pot with the land, placing simply, dangling in the water, a cutting of Philodendron with only one aerial root.

Nowadays, in my large aquaria, close to the wall, are dipped at least a thirty of roots, and the Philodendron, with the help of a few nails, has covered two walls with 12 square metres of leaves.

I have stopped the filtering of the pools, the water is clear and odourless, the fishes are in good health, and, last but not least, I do not have to water the Philodendron any more, when I am flying towards the Tropics. 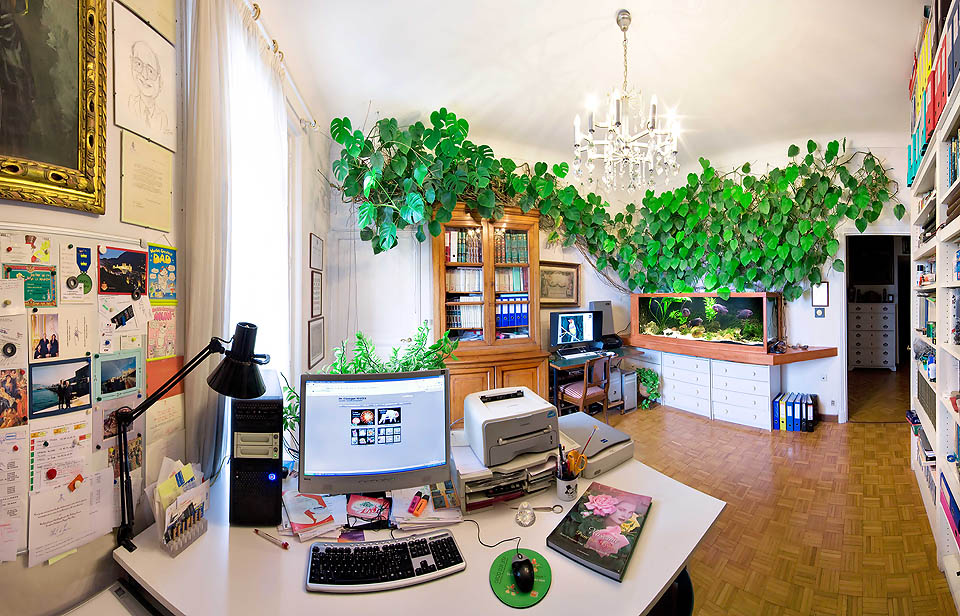 My philodendron (Monstera deliciosa) and the aquarium © Giuseppe Mazza