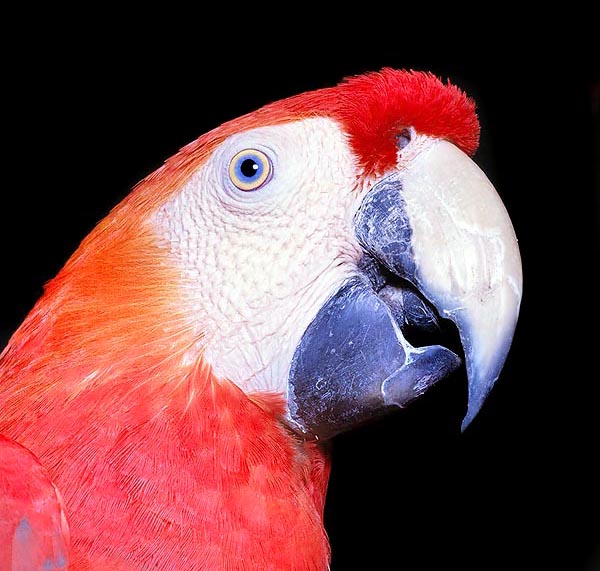 Sociable and noisy, present in all zoos, the Ara macao is the more known among Ara genus © G. Mazza

Among all the true parrots belonging to the genus Ara, it is probably the most known in captivity, although its commerce and sale is strongly forbidden by the CITES. The only bodies which are allowed to keep it captive and in the sphere of the biology of conservation programmes are the Zoological Gardens, Zoo-safaris, Zoo-parks and Aquatic Parks.

The wording which gives the name to the genus Ara has a purely onomatopoeic origin, as it refers to the particular cry done by the birds belonging to this genus.

Most probably it was given by the first biologists who discovered these birds in the central-southern Americas, rightly hearing the cry of the Ara macao Linnaeus, 1758, which emits it more intensely between all the species of the genus Ara, this not so much pleasant call, but typical, a sort of ‘rraa…aar’.

As the main colours are the yellow, red and blue, in Italian it is commonly called also Ara giallo-rosso-blue and in English, Scarlet Macaw. The specimens bred in captivity need spacious aviaries, usually with the dimensions of 2x2x3 m, whilst the box for nidifying must be 80x50x50 cm. 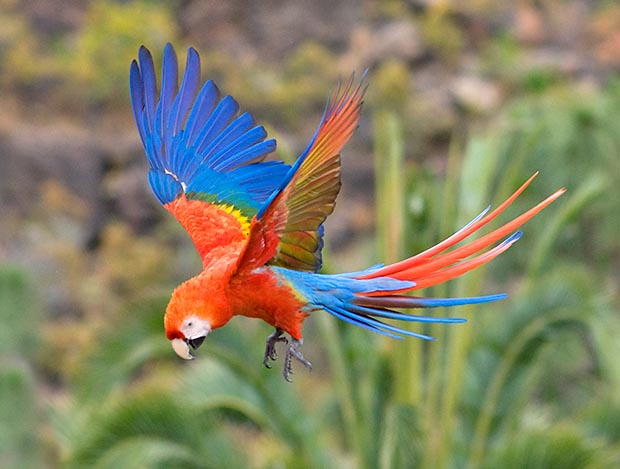 The principal colors of the Macaw macao (Ara macao) are the yellow, the red and the blue one © G. Mazza

This because it’s a bird which, since the birth, needs to move the wings very much. When out from the aviary, it flaps the wings very quickly even for some minutes, whilst the other species of Ara rarely do that for more than a few tens of seconds. And also in the wild, for nidifying, they need vast spaces, inside trunks of large diameter.

They do not bear very well the low temperatures, whilst in summer they enjoy the presence of the sun and of aerated locations.

Unluckily, the specimens recovered in the wild, for instance because wounded, if placed in an aviary, adapt badly to taming, whilst those in captivity, are tamed easily, getting affectionate to their owner and are capable to perform ability exercises and are very clever in vocal imitation, perhaps helped by the fact that they lose the capacity to emit their characteristic cry.

It is good to put inside the aviaries some pieces of trunk which they will bark for using their great beak.

They are frugivorous, preminently granivorous, in captivity it would be best to furnish diets rich in dried fruits, nuts, almonds (the shell of which they break easily with their robust and curved beak), apples, cereals of various kind, wheat, carrots which will provide almost all the full spectrum of dietary minerals, proteins, vitamins and vegetable fats needed, which in the wild they can satisfy through their specific alimentary ecology. 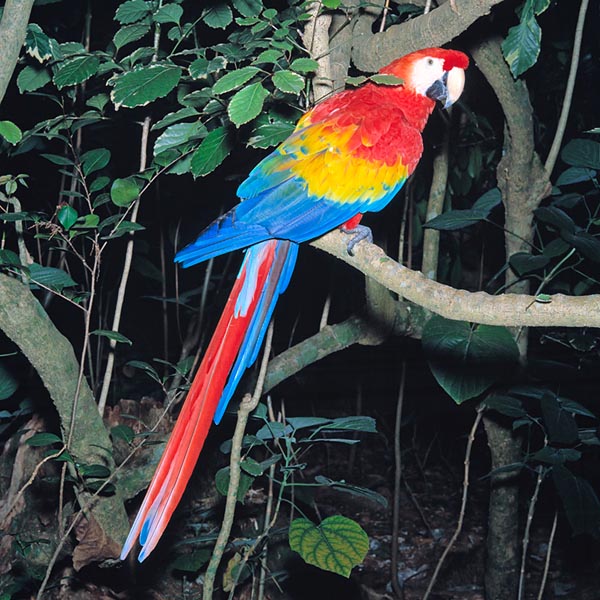 Prefers pluvial and evergreen forests as well as, the primary or secondary forests of lowland © G. Mazza

The zoogeographic areas can be divided in two main macro-areas.

The Central American one, where they are found mostly in Mexico, Guatemala, Belize and Panama; they are present also in Costa Rica where, unfortunately, the overwhelming commerce of bananas, with relevant utilization of herbicides and insecticides has decimated the species due to the habit the same has to nidificate on these plants. The South American area is very vast, as it concerns the Amazon Basin, and spreads from Paraguay to Bolivia, to Peru east of Andes, the Amazonian Brazil (Mato Grosso), Guyana and Trinidad. Colonies are present also in the Galàpagos Islands and Coiba Island.

Usually, they are found in the lowlands up to 500 m of altitude, even if flying couples have been sighted up to 1000-1500 m of altitude. It has a preference for the evergreen, pluvial forests and the plain primary and secondary ones. They have been seen also in the South American savannahs and prairies, even if, being provided of zygodactyl feet, they prefer to live on the trees, rather than to walk in the plain. The most dense colonies are however found on the trees growing at 200-250 m of altitude above the sea level.

It is 81-96 cm long, of which more than a half is the graduated and pointed tail, typical of all Macaws. The average weight is in the order of the Kilo. The plumage is mostly scarlet, but the feathers of the rump and of the coverts of the tail are pale blue, the great upper coverts are yellow, the upper sides of the flight feathers are dark blue, like the tips of the tail feathers. 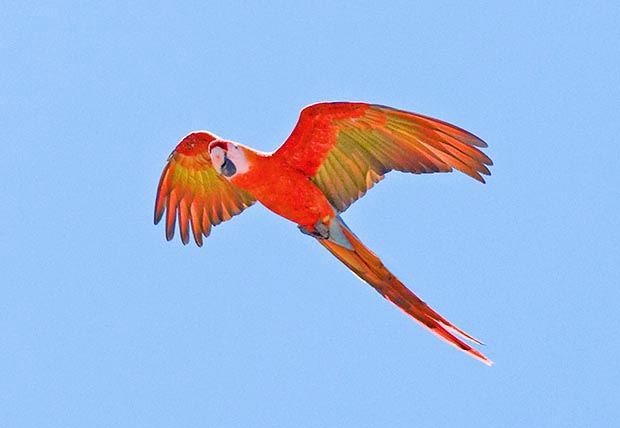 The Ara macao measures 81-96 cm, but more than half are up to the tail © Giuseppe Mazza

The parts of the head between the eye and the lateral portion of the base of the beak and the cheeks are white, the mandible is black, the limbs with zygodactyl foot, are pale, the iris black in both sexes, the pullets have brownish iris and a paler chromatism, but when matured sexually, which will be when 6 years old for the females and 7 for the male, it will assume the characteristic brightness. Robust, curved beak and with the superior half portion mobile in respect to the skull.

Although the females would seem to have a very little shorter and more curved beak, even an experienced eye would have an extreme difficulty in determining the sex. There is, therefore, a complete absence of sexual dimorphism both chromatic and morphologic. The determination of the sex in a couple of Ara Macaw is done either through analysis of the DNA of the feathers (the coverts) or of the karyotype, or by laparoscopy, with an incision between the next to the last and the last costae, for pointing out the presence of the testicles, when the sexual maturity has happened, the absence of which will be the discriminant in favour of the feminine sex.

It is a very noisy bird, which emits sounds which can be easily heard, in the forests, from very far away. They can live in associations with other likes, forming rowdy colonies, especially close to water streams where they love to bathe, mainly in summer. 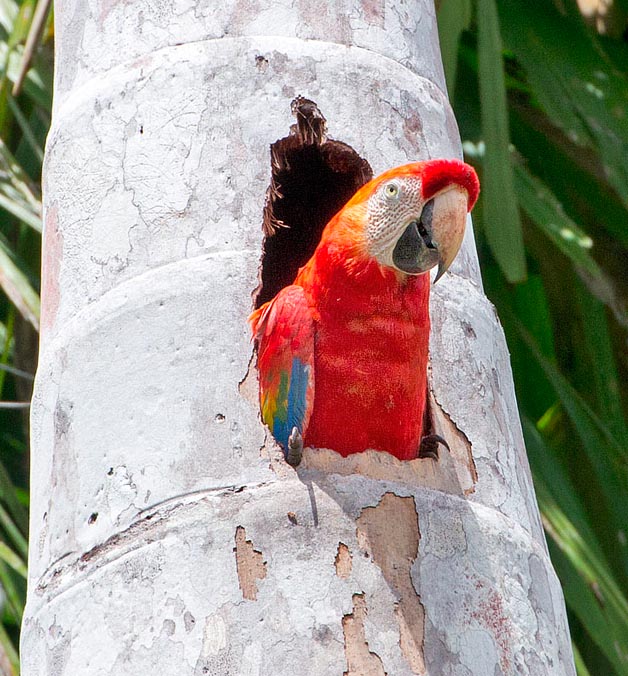 Home sweet home. What’s better than a net, at the right height, in the heart of a palm? © Giorgio Venturini

The are very folksy, usually not aggressive, apart when engaged in the building of the nests and during the courting, or when the offspring is present. They are excellent vocal imitators and clever flyers. It happens frequently to see couples (both male and female, or male and male), flying. They fly almost the whole day, looking for food, but the evening, when they rest. They are mainly granivorous and frugivorous (nuts, also seeds of various drupaceous plants, or with hard pericarp).

They love the figs of the genus Ficus, fruits of Rubber tree (Hevea brasiliensis), fruits of the Bursera graveolens, tropical plant of the family Burseraceae, or also fruits of plants of the family of the Malvaceae (Sterculiaceae) which they swallow together with a little of sand or of clay, which is good for neutralizing the presence of poisonous alkaloids, often present in these fruits when unripe.

As other species of Ara, they do not have a specific season of reproduction, what is noticed is that during the phase preparing the mating, the male becomes particularly aggressive when constructing the nest, built almost always inside the cavity of great diameter tree trunks. The female lays an average of 2 to 4 white eggs, some of these can be not fecundated. The clutch lasts an average of 24-26 days, during which the male is busy in furnishing the food to the partner and later, once the eggs are open, by regurgitation to the pullets.

These ones learn how to fly when about three, three and half months old, but they will go away for good from the parents after about one year of life. The CITES governs and forbids the trafficking of this species, which density is constantly decreasing due to the continuous deforestation and the utilization of pesticides, herbicides and anti-cryptogams. The IUCN has classified them as Threatened Species.

Psittacus macao Linnaeus, 1758; Psittacus tricolor Bechst, 1811 (even if until short time before 1811 it was called Psittacus omnicolor of Bechst, then replaced with tricolor).