The species is native to western Taiwan where it grows in open areas or in the rain forests from the sea level up to about 1000 m of altitude.

The generic name, Arenga, comes from the Malay ‘areng’ referred to the Arenga pinnata; the species is honoured to the erman botanist Heinrich Gustav Adolf Engler (1844-1930) author of the system of classification of the plants that bears his name.

The Arenga engleri Becc. (1889) is a monoecious species, monocarpic (the stem after having brought to maturation the fruits dies), caespitose, unarmed, with 2,5-4 m tall stems and of 10-15 cm of diameter, covered by the foliar bases and by a mass of brown-blackish fibres that remain for long. 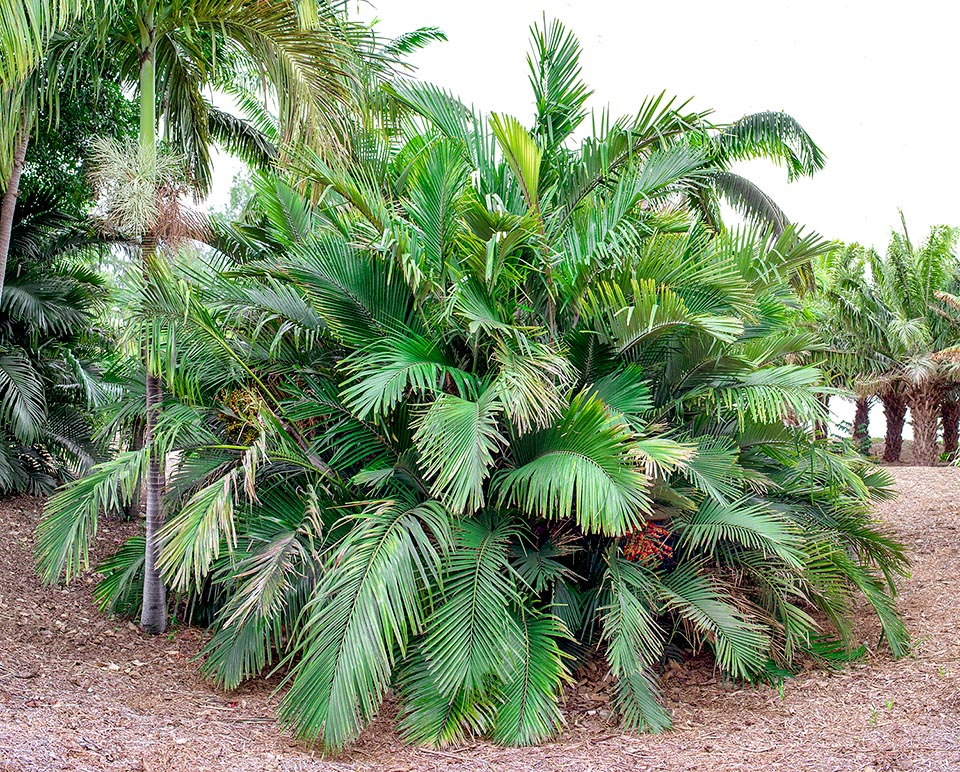 Native to Taiwan, where can be 4 m tall, Arenga engleri is a caespitose, monocarpic species, hence the 10-15 cm broad stems die after fructification but the plant survives through new stems produced in succession. Cultivable in open land in the tropics and in warm temperate climates or in pot for the decoration of inner and outer spaces © Giuseppe Mazza

The leaves, on a 0,8-2 m long petiole, are imparipinnate, initially erect, then arcuate, 1,6-2,8 m long, with 30-42 pairs of induplicate leaflets (inserted on the rachis to form a V), linear, excepting the flabellate terminal, with margins slightly lobed and irregularly toothed apex, arranged regularly along the rachis, excepting the base where they stand in groups of 2-4, on the same level, 45-75 cm long and 2-4 cm broad in the median part, of glossy dark green colour above, silver grey below.

Inflorescences, on a 50-60 cm long peduncle, between the leaves (interfoliar), 35-45 cm long, unisexual, due to the elimination of the flowers belonging to the other sex, on the same stem, with ramifications of the second order, that develop solitary at each node from the downwards (basipetal) at the end of the vital cycle. Oblong male flowers, 1,2-1,7 cm long and of 0,6-0,7 cm of diameter in bud, of orange yellow colour with 25-50 stamens, globose female flowers, of 0,8-1 cm of diameter, of orange yellow colour with trilocular globose ovary; the flowers emit and intense scent, sensed from far away, that reminds that of the “Parma violet” (Viola odorata L.). Globose fruits, 2,2-2 cm long and of 1,8-2,5 cm of diameter, initially green, then orange yellow and finally purple red when ripe, containing 1-3 angular seeds, 1,3-1,6 cm long and 1-1,2 cm broad; the pulp is highly irritating due to the presence of calcium oxalate crystals, therefore the fruits are to be handled with care, possibly wearing gloves. As aforementioned, once the fructification is completed the stem dies, but the plant keeps on living with the new stems produced in succession. 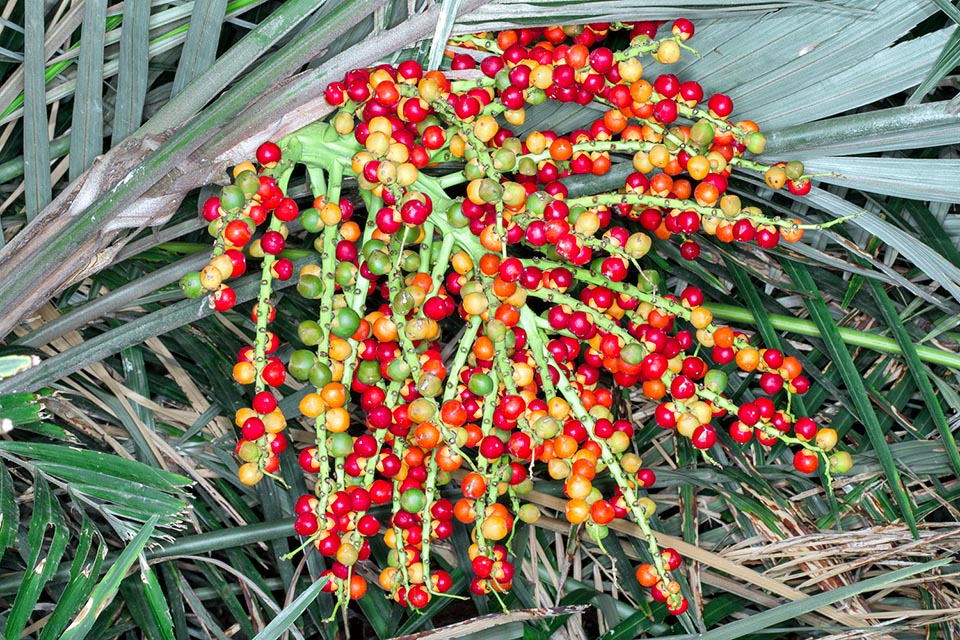 The fruits have the intense smell of the Parma violet. The pulp of the globose fruits, red when ripe, is highly irritating due to the presence of calcium oxalate crystals © Giuseppe Mazza

It reproduces by seed, previously kept in water renewed daily for one week, placed in draining loam maintained humid at the temperature of 26-28 °C, with variable germination times, from 3 months to up to more than one year, less frequently by division, being an uneasy operation, due to the compactness of the stems, and of uncertain outcome.

Palm standing among the most attractive and adaptable to different conditions of cultivation, utilizable in large as well as in small gardens in the tropical, subtropical and warm temperate climate zones, where it may resist temperatures up to about -7 °C, provided exceptional and short lasting. It can grow in full sun and also in the shade, even if it prefers an intermediate exposition, and in various kinds of soil, slightly acidic to slightly alkaline, even poor, provided draining, and when adult can bear short periods of drought, but grows faster and more luxuriant in the fertile ones maintained almost constantly humid. Young plants are easily cultivated in pot for the decoration of inner and outer spaces.