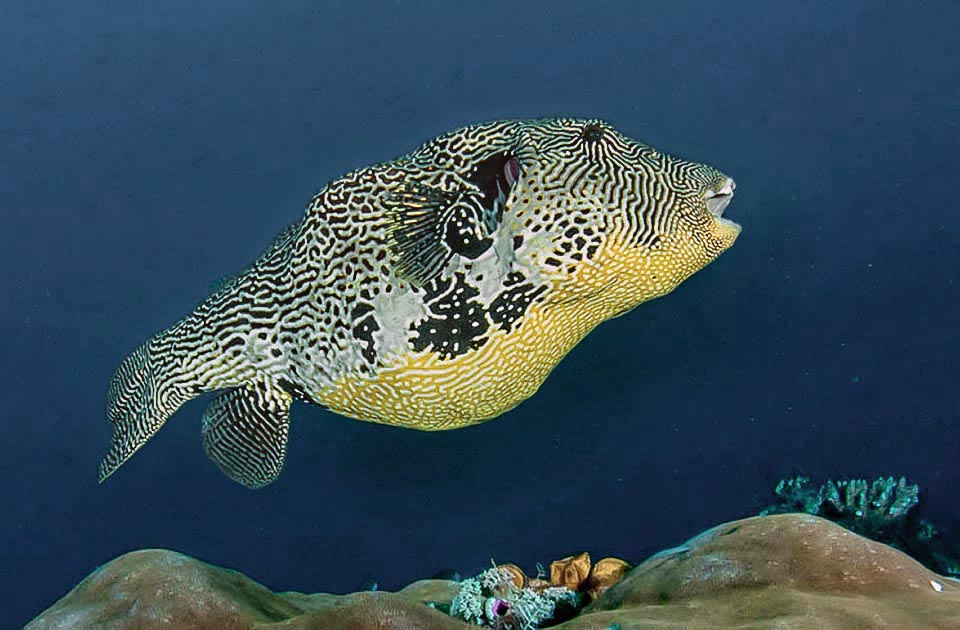 The unusual Map puffer (Arothron mappa Lesson, 1831), belongs to the class of the Actinopterygii, the ray-finned fishes, to the order of Tetraodontiformes and to the family of Tetraodontidae, the pufferfish, which counts 26 genera and about 200 species, mostly tropical and marine, but present, at times, also in the fresh and brackish waters.

The name of the genus “arothron”, comes from the Greek “a-”, privative, and “rothron” = nostril. In these fishes, in fact, the nasal tentacles do not have openings, are therefore “without nostrils”, even if, maybe, they have olfactory functions.

The Latin name of the species, “mappa” = napkin, piece of fabric and, by extension, geographical map, refers to the mimetic labyrinthine drawing which seems to almost indicate a pathway.

The map puffer fish has a vast distribution in the tropical waters of the Indo-Pacific. We find it, indicatively, from South Africa to the Seychelles, Mauritius, Réunion, Maldives and Andaman Islands, in Thailand, Indonesia, Australia, New Guinea, Micronesia, Philippines and Taiwan up to the Ryukyu Islands in the southern part of Japan. 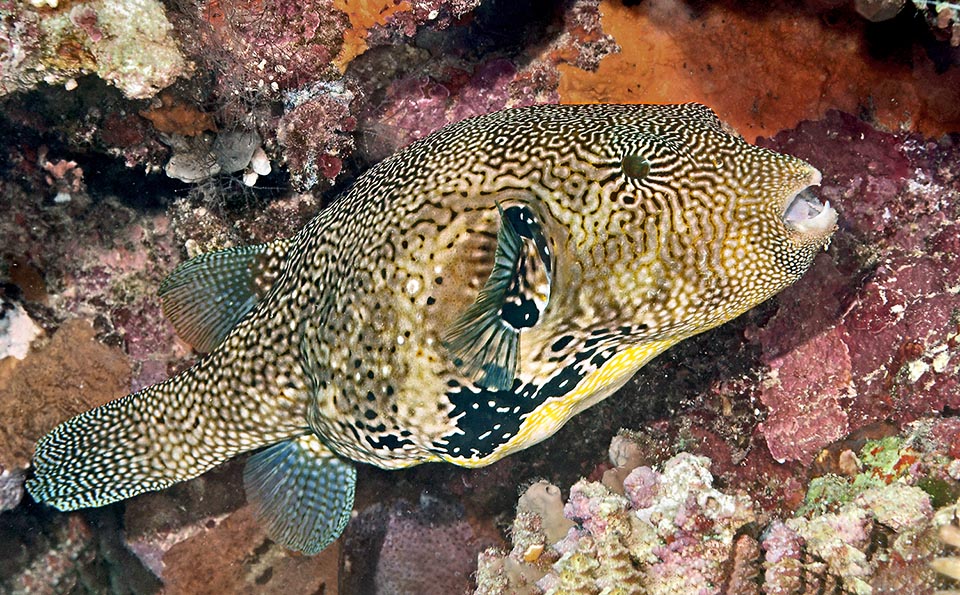 Even 65 cm long, its mainly eats several benthic animals, including the sponges and algae full of poisonous bacteria that allow him to fabricate its famous tetrodotoxin © Benoit Lallement

Eastward, it has colonized Samoa and Tonga. Southward, in the Pacific, the Great Barrier Reef and New Caledonia.

It lives, solitary, in the lagoons and in the coralline formations, in clear and calm waters between the 5 and 30 m of depth.

The relatively elongated body can reach the 65 cm. When in danger, the animal swells swallowing water till it gets, as well befits a puffer fish, an almost spherical shape. The stomach expands enormously whilst a membrane, blocked inside the mouth, seals the mouth.

The fish is of course now unable to swim, but it surprises the aggressor for the sudden change of look and becomes practically elusive, like in the game of biting the apple hanging on a thread. 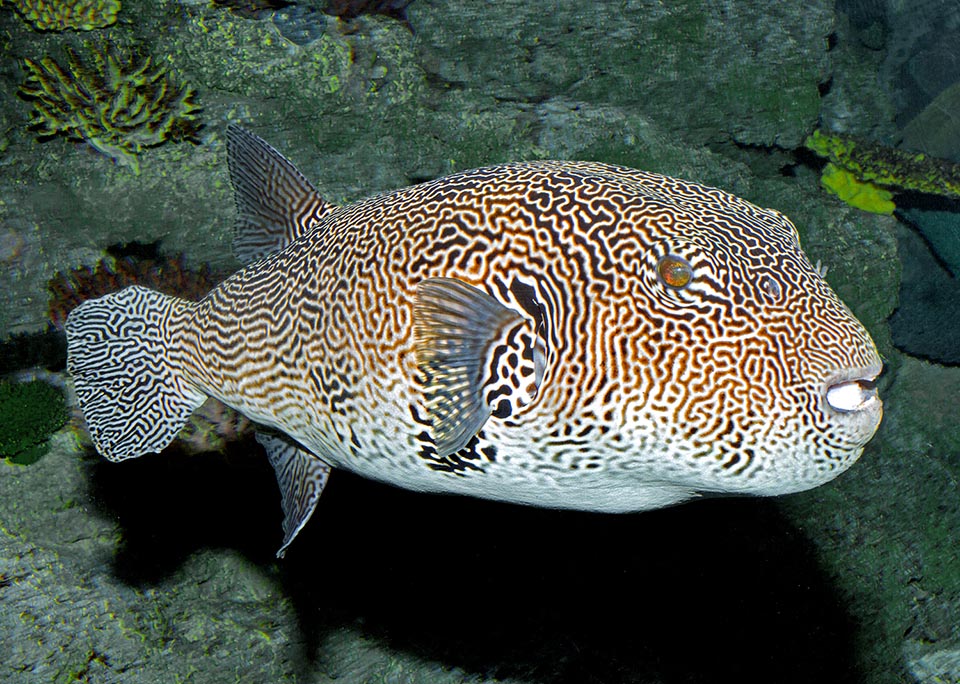 This is a very strong poison that accumulates in the skin and the bowels inhibiting respiration of he who eats them. Before, of course, the animal swells like a ball for not being grabbed and swallowed by the predators, but when the operation fails, even if it dies, the importunate survivors in future will avoid attacking the fishes with its livery © Giuseppe Mazza

The skin, protected by poisonous mucus, has no scales. The snout, short, has small mouth with two incisors merged on each jaw, forming a solid beak. 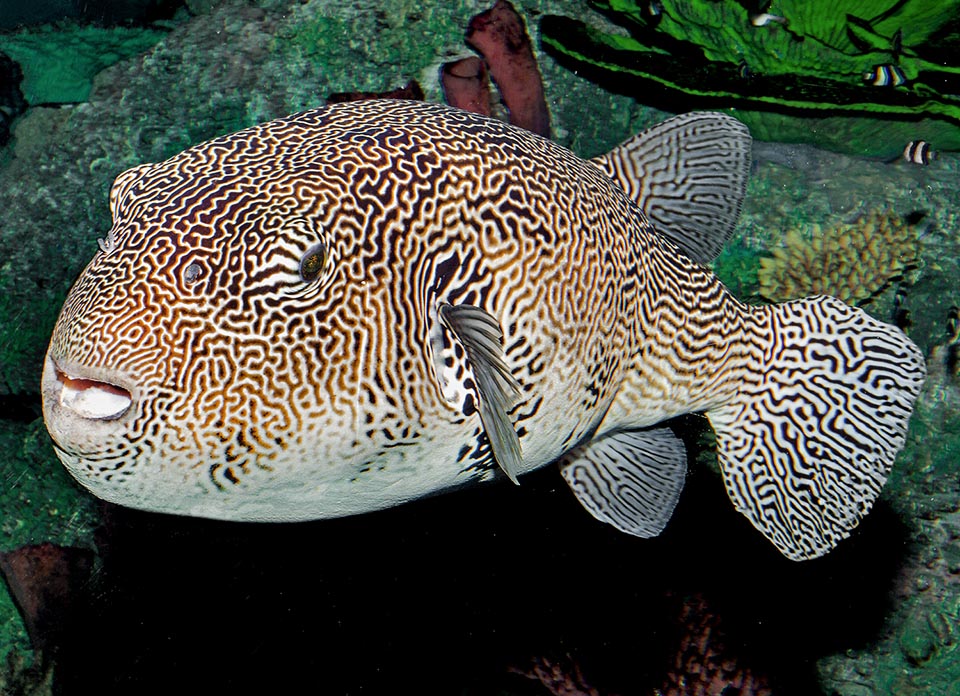 Nature is primarily worried for the survival of the species, and in addition to serve as a warning, these typical labyrinth-like designs have also a camouflaging function © Giuseppe Mazza

The map puffer fish nourishes of numerous benthic animals, among which the sponges and weeds full of poisonous bacteria. Like many Tetraodontidae, it accumulates in this way, day after day, in the skin, the liver and in the ovaries, a particularly toxic substance, the tetrodotoxin, which causes paralysis, up to block breathing. The predators know well this, and, despite the manipulations done by experienced cooks, every year tens of deaths occur among those who want, at any cost, appreciate its flesh, prized and theoretically edible because the muscles do not contain poison.

For the reproduction, the Arothron mappa digs a hole into the sand where the fecundation takes place. Considering that it is a relatively rare fish, even if the populations decimated by the events may double in 1,4-4,4 years, the fishing vulnerability index is already, unluckily, alarming, being of 46 on a scale of 100.