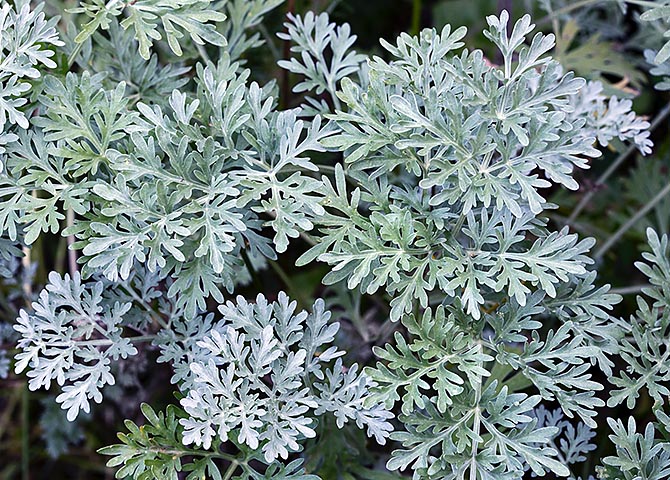 The genus Artemisia includes, after the various taxonomical interpre- tations, from 200 to 400 species of herbaceous or shrubby plants rich of essential oils and with a rather bitter taste due to the presence of terpenoids and sesquiterpenic lactones. They mainly live in the temperate climates of both hemispheres, mostly in the boreal, manly in dry and semi-arid habitats. The pollination is anemophilous and many species host, as nursing plants, various larvae of lepidopterans.

The etymology of the genus is uncertain, after some authors it should come from Artemisia II, wife of Mausolos, ruler of Caria, after others it is more likely that it may refer to Artemis, goddess of the hunt, after others from the Greek word “artemos”, healthy, with reference to the beneficial properties of many species of Artemisia.

The name of the species comes from the Latin “absinthium”, name with which was indicated the species and which gets its origin from the Greek “absinthion” bitter (lacking of sweetness), with reference to the very bitter taste of this plant. 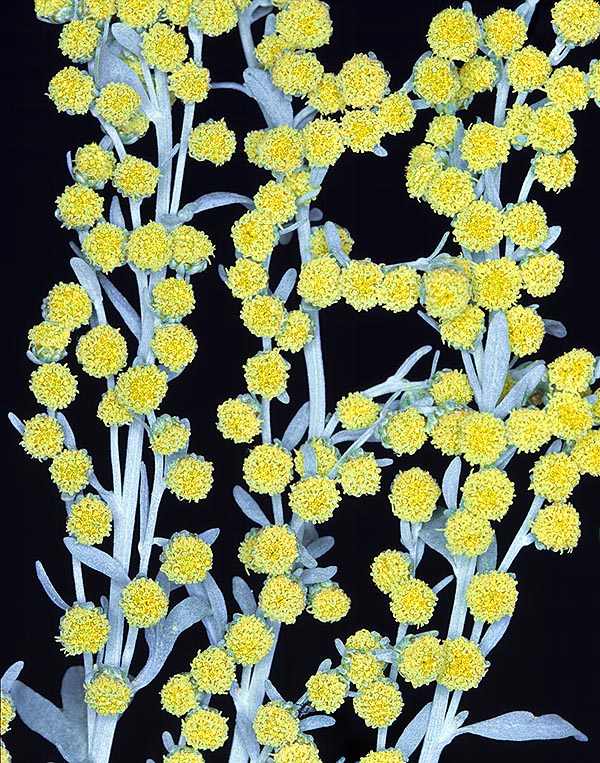 It grows from the plain up to around the 1100 m in the arid uncultivated lands, road borders, sunny escarpments, rocky or stony uncultivated areas, fences, margins of country roads, etc., on calcareous as well as siliceous land, with preferably alkaline Ph. Cultivated and naturalized species.

Prof. Sandro Pignatti in his magnificent opus concerning the Italian flora writes about the distribution of this species indicated as East-European (?) become Subcosmopolitan: “In Italy we have everywhere the feeling that this is a plant introduced and since long time naturalized (archaeophyte) unable to penetrate the natural vegetation. The country of origin has not yet been identified, but is thought to be in the Near East; already known to the Egyptians and to the Greeks, the use (as medicinal, aromatic and vermifugal plant) spread already in pre-Roman times all over Europe”.

In phytotherapy are employed the leaves harvested in May and the flowered heads of the plant gathered in July-August (Absithi folia et summitatis), which contain essential oil with the monoterpene thujone, thujol, and numerous compounds related to this, phellandren, sesquiterpenes and absinthol, besides the bitter glucosides absinthin, anabsinthin, artabsin, anabsin, anabsinin, matricin, flavonoids, organic acids, resins and tannins.

Its preparations (which are mainly used in tincture and medicinal wine) have remarkable appetizing, stomachic, eupeptic, tonic-stimulant, diuretic, biliary declogging, emmenagogic, febrifugal in rheumatic and flu fevers and vermifugal properties; it has also antitoxic action in the cases of saturnism (poisoning due to exposition to lead). The preparations based on absinthe are contraindicated in the gastric and intestinal ulcers as well as in pregnancy and during breastfeeding. For external use, the decoction is a good antiseptic for medicating sores and ulcers. Recently, they have ascertained also an acaricide and insecticide action. The bitter principles exercise a remarkable action on the gastric and on the biliary secretions and therefore are suggested against the lack of appetite, states of convalescence, minor gastric, intestinal and biliary, even with spasms, ailments.

The absinthe essential oil (known also as green Fairy) has a high toxicity due to the thujone and is present in the absinthe spirit, known alcoholic beverage containing also other vegetal extracts of anise and fennel, seeds of angelica, melissa, hyssop, veronica, etc., whose chronic abuse led to the absinthism, common in the XIX century in southern France as remind us Manet’s “The absinthe drinker” and Degas’ “The absinthe”, with personality disorders. 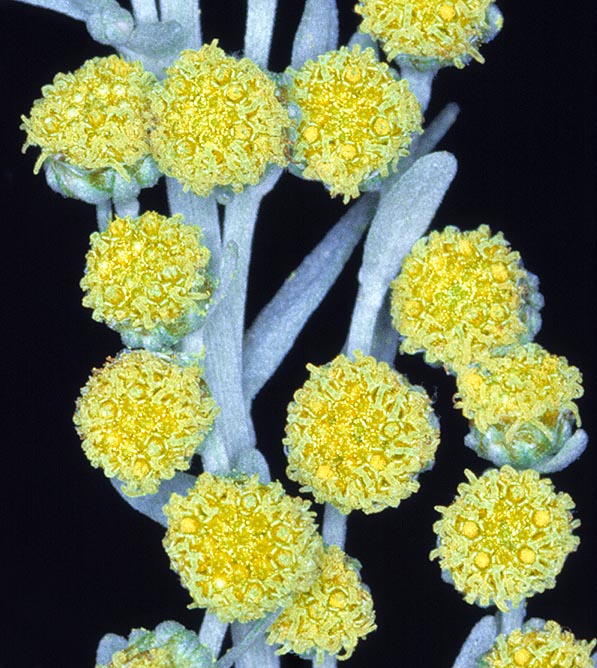 The pollen is allergenic, but leaves and flowers have medicinal virtues © Giuseppe Mazza

In the past, the production of this spirit was forbidden for long time; presently it is again allowed in some countries, but with values of thujone in function with the alcohol content.

In the countries where the absinth is frequent, its decoction was used for moistening the skin to keep mosquitoes and horseflies away and its bunches hanging by doors and windows keep away flies and moths.
The man producers of absinthe are the countries of Eastern and Balkan Europe.

Leave to macerate in one litre of sweet white wine 30 grams of dried flowered heads of absinth for four days stirring once in a while, drain and squeeze well the residual. To take 25 ml half an hour before the meals.