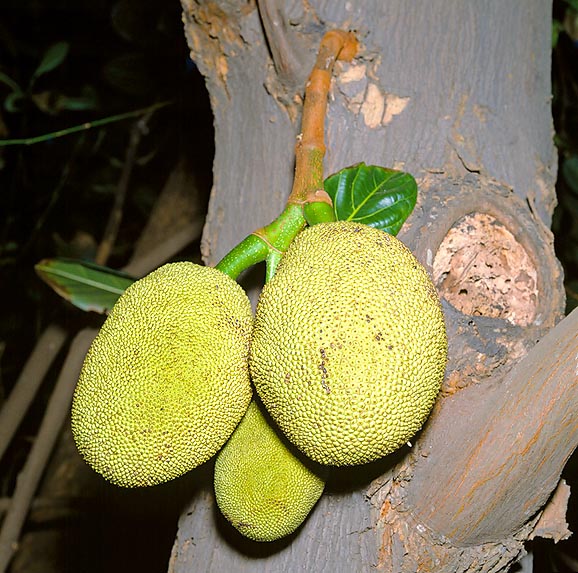 This species is native to India, where it grows in the pluvial forests of the western Ghats up to about 1000 m of altitude.

The Artocarpus heterophyllus Lam. (1789) is a fast growing evergreen tree, up to about 20 m tall with a diameter of the trunk of 30-50 cm and reddish-brown, smooth or tuberculate bark; all parts of the plant contain white, very sticky, latex.

The leaves, alternate, on a 1-3 cm long petiole, are from elliptic to obovate, 7-15 cm long and 3-8 cm broad, leathery, glossy dark green on the upper page, pale green below, with entire edge in the ripe plants, trilobed in the young trees new vegetation. 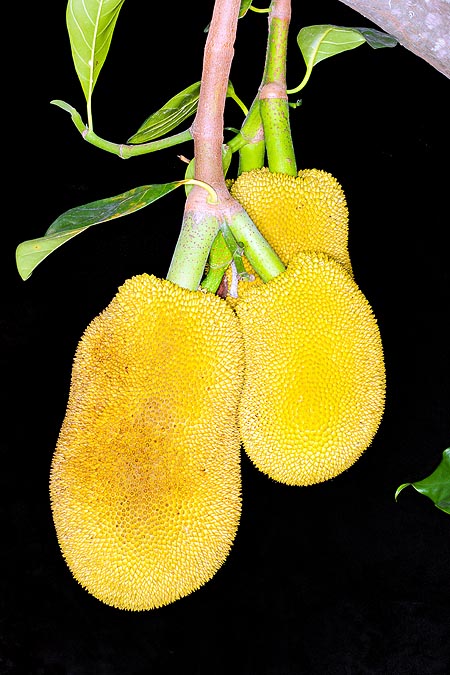 The fruits is a syncarp (whole of more fruits, grown at the same time and aggregated among them), brownish yellow when ripe, globose or ellipsoid, 30-90 cm long and with 25-50 cm of diameter, covered by hexagonal tubercles; the inside is formed by “bulbs” of yellow pulp surrounding the seeds, up to five hundred in number, almost reniform, 2-3 cm long.

The ripe fruit emits a disgusting smell, whilst the pulp has a smell reminding that of pineapple or banana.

It reproduces by seed, which is to be positioned between few days, having a short lasting germination capacity, the same happens after 1-2 months and the fructification between 4 and 14 years of age; the possible transplanting of the seedlings is to be quickly done due to the delicacy of the long taproot.

The grafting or the air layering is used for the selected varieties.

It is an amply cultivated species in India, Sri Lanka and Thailand, where the fruit, the biggest produced by a tree, is much appreciated and popular and where numerous varieties have been selected; it is less cultivated elsewhere, but Brazil and Philippines, mainly due to the unpleasant smell of the ripe fruits.

Cultivable in the tropical and humid subtropical climate zones, its cultivation may be tried in very sheltered location in the milder warm temperate ones, where the temperatures just below 0 °C are short-lasting exceptions; it requires full sun and deep grounds, rich and perfectly draining, kept humid, as, in fact, it does not resist to drought, but not even to stagnating water, which may reveal lethal.

The unripe fruit, whose smell is not unpleasant, is consumed cooked, sliced, as a vegetable.

The flesh surrounding the seeds of the ripe fruits is consumed raw as well as cooked or is utilized for making preserves, ice-creams or canned in syrup; in some areas, the dried pulp is consumed fried. The seeds, toxic when raw, are to be consumed cooked, boiled or toasted.

In addition to the fruit, the tree gives a very good wood, resistant to the termites, similar to the mahogany and the teak, thanks to its characteristics of resistance, and utilized in building and in the fabrication of furniture, equipments, musical instruments and valuable objects.

Parts of the plant are utilized in the traditional medicine for various pathologies.