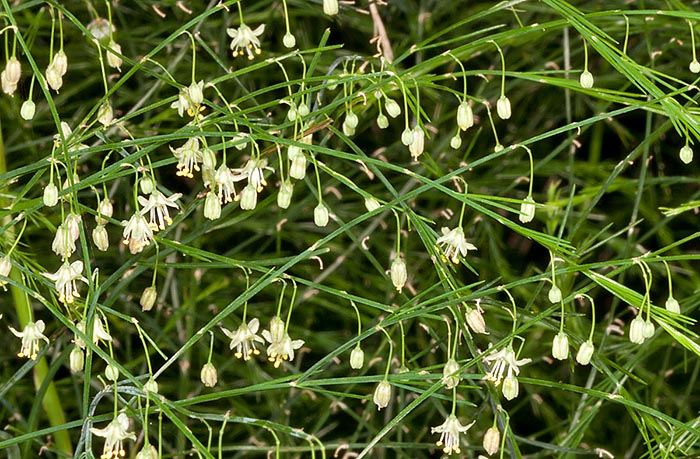 The species is native to Angola, Malawi, Mozambique, Namibia, South Africa, Swaziland, Tanzania, Yemen and Zambia, where it lives in the forests, mainly along the water streams.

The name of the genus comes from the Latin “asparagus”, in its turn from the Greek “asparagos”, of uncertain origin; the name of the species is the Latin adjective “virgatus, a, um” = equipped with green twigs, with obvious reference.

The Asparagus virgatus Baker (1870) is an herbaceous species or a perennial shrub, evergreen, 0,5-1 m tall, unarmed, with dark green, 0,4-1 m long stems, in the lower half almost erect, not ramified, only with the old tiny membranous leaves reduced to lanceolate scales, 5-10 mm long, above, much ramified with the tiny membranous leaves and cladodes (stems or green branches that perform the chlorophyll function) spirally placed, filiform, in groups of 3-6, 3-15 mm long and of 0,5 mm of diameter, unequal, easily deciduous.

Solitary axillary flowers, hanging, on an about 1 cm long peduncle, with 6 slightly uneven tepals, about 0,4 cm long, of greenish white colour and 6 stamina. 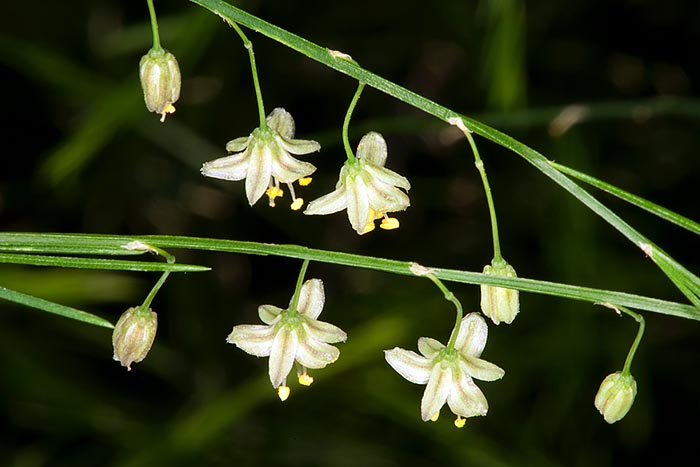 Even if tropical it stands cold. Hanging flowers with 6 4 mm tepals and 6 stamina © Giuseppe Mazza

The fruits are ovoid berries of about 0,5 cm of diameter, initially green, later of colour from orange to red when ripe, tending blackish with the time, containing only one seed of black colour.

It produces underground stems with which it expands quickly.

It reproduces by division and easily by seed, so much to become invasive in some areas.

Species of easy cultivation, particularly alluring due to its delicate and light look, with the advantage, compared to other species of Asparagus, of not having thorns; it presents a high resistance to the low temperatures, up to -15 °C, and well rooted to drought periods.

It is usually utilized for border and as underbrush, as it bears the full sun as well as the partial shade, on various types of soil, provided well drained, even if it develops better in the sandy and rich in organic substance ones, from acidic to neutral, in alkaline soils it can show symptoms of chlorosis. It adapts well to the cultivation in pot, for the decoration of outer as well as of inner spaces, in organic soil with addition of coarse siliceous sand. It is extensively cultivated for commercial purposes for the production of cut branches, utilized thanks to their ornamental characteristics and the long duration in the floral compositions.